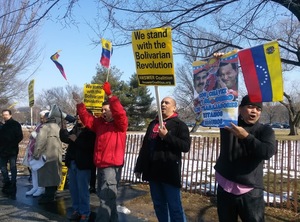 As the Permanent Council of the Organization of American States (OAS) took up the current political situation in Venezuela as part of its meeting in Washington, D.C., on Wednesday, Feb. 19, demonstrators once again took to the streets, some in support of the revolutionary government, and others in support of the right-wing opposition. Just four days earlier, a similar situation played out in front of the Venezuelan Embassy.

The OAS, an organization dominated by the United States, is renowned throughout progressive circles in Latin America and around the world as a tool to advance U.S. interests in Latin America and the Caribbean, and it lived up to its reputation in Wednesday's meeting "express[ing] their concern ..., echo[ing] the call for calm ..., and urg[ing] the beginning of a dialogue," according to their press release.

A number of progressive groups from the D.C. Metro Area, including the ANSWER Coalition, mobilized to show support for the Bolivarian Revolution and oppose U.S. or OAS intervention, continuing to fight the illusion that the people of the United States support the CIA-backed anti-democratic coup attempt of last week.

Our multinational, working-class presence visibly angered the right-wing demonstrators, who spewed racist, anti-working class slurs like, “Get a job!” and “Who paid you?” They hurled these childish, bigoted insults between chants like “OAS: Do your job.” The right-wing demonstration was almost exclusively attended by wealthy Venezuelan exiles, many of whom are students at expensive private universities, and their friends.

If their blatantly anti-working class stance was unclear before today, their pleas to the OAS—a thinly veiled appeal for U.S. intervention in Venezuela—make them clear as day.