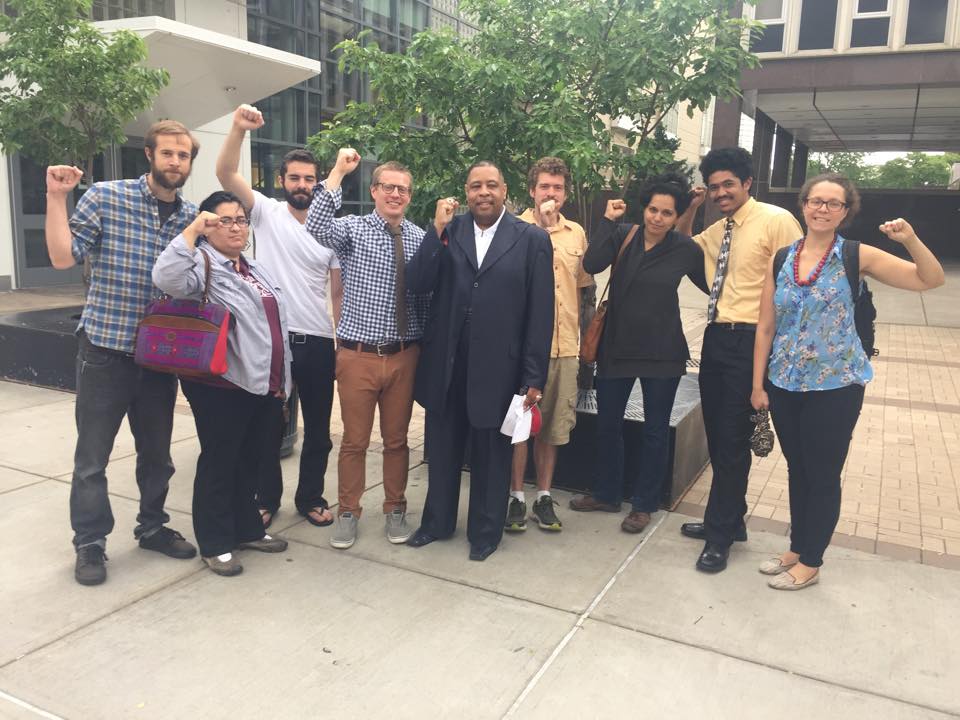 On July 8, there was a “pre-trial conference” for the charges brought by the City of Syracuse against Derek Ford, an organizer with the Syracuse Answer Coalition and a member of THE General Body. The charges stemmed from an April 30 protest in solidarity with Freddie Gray. Ford and Reverend Dexter were charged with violating city ordinance 16-35(b), which states that “No persons, society or organization of any name or nature shall assemble, congregate, parade or march in or through any of the streets of the city without first securing a permit therefor in accordance with this section.” The maximum penalty for the violation is 150 days in jail and/or up to a $150 fine.

Although over 100 people participated in the march, Ford and Dexter were the only ones charged.

Both Ford and Dexter pled “not guilty” at their arraignment last month. While Ford opted for a pre-trial conference, Dexter’s lawyer moved to go straight to trial. That trial—which will not be in front of a jury but in front of a judge—will take place on Aug. 3 at 9:30 am.

The Assistant District Attorney demonstrated no familiarity with the case or the ordinance. No one—no journalist, court clerk, activist, or lawyer—has commented on anyone being charged with this violation in the past. After hearing about the charge and the incident form which it stemmed from Ford’s layer (retained through SU’s legal services), the ADA told the judge that “the people” would be willing to settle for an ACD with a written apology from Ford. ACD stands for “adjournment in contemplation of dismissal,” and it essentially means that as long as the defendant doesn’t incur any criminal charges in a period of time (six months in this case), then the case is dismissed. Ford is moving out of state shortly and had no objections to the ADA’s recommendations.

The charges came from the Syracuse police and the Mayor’s office, but it doesn’t appear that the DA’s office is particularly interested in the witch-hunt.

We are urging all of our members and supporters to show up in solidarity with Rev. Dexter on Monday. It will be especially important for court solidarity at this time because Rev. Dexter has been targeted by the police before, and—along with this wife—has been the victim of police brutality and intimidation (including an incident this year in which Chief Fowler stalked and harassed Rev. Dexter outside of a supermarket).