Risa C'DeBaca speaks at an Occupy Syracuse rally in Oct. 2011. 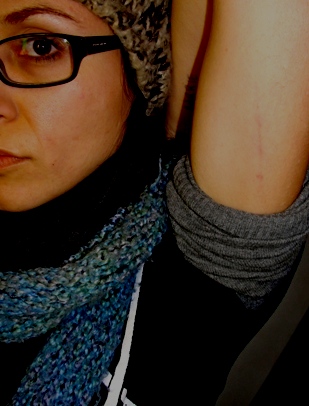 The police officer twisted Risa's arm so forcefully that his nails dug into her skin, even though she was wearing three layers of winter clothing. Adam C'DeBaca speaks at an Occupy Syracuse rally in Oct. 2011

During the early morning hours of Jan. 19 Syracuse City police, with the assistance of the Department of Public Works, carried out a raid on Occupy Syracuse. The occupation had been active for 109 days at Perseverance Park on Salina St., in between the Meryll Lynch and Chase Bank buildings. In addition to the arrest of seven Occupy activists on trumped-up charges, the police violently assaulted two activists with the ANSWER Coalition.

ANSWER volunteer Risa C’DeBaca and ANSWER organizer Adam C’DeBaca had been at the Occupy Syracuse site from approximately 1:00 am to 3:00 am on Jan. 19. Risa and Adam had signed up for the two-hour shift to guard the encampment from the impending assault by the Mayor and police.

Shortly after their shift ended, they received word that police were moving in on the camp. About 30 cops, along with a bulldozer and dump truck, showed up to evict the peaceful protesters at 3:40am.

Risa and Adam rushed back to the site upon hearing the news. They parked their car in the lot behind the encampment, entering on Clinton St., parking about seven spaces into the lot.  As they began to walk towards the scene a cop yelled at them to “stop!” They then backtracked around a sedan next to their car in an effort to clear the area. The cop screamed “I told you to stop!”

At this point, the cop attacked Risa and Adam, running toward them, grabbing them and throwing them up against the sedan. The cop violently held both of their arms. Adam said “We are not resisting.” Risa screamed “You are hurting me! Stop! You are hurting my arm!”

After several seconds, Adam asked “Are you detaining us, or are we free to go?” Upon hearing these words, the cop let both Adam and Risa go.

In the accompanying photo of Risa’s arm, you can see some of the markings left by the cop. The bruising is the result of the cop twisting Risa’s arm so forcefully that his nails actually dug into her, causing the seen discoloration. Risa was wearing three layers of winter clothing, so the fact that the mark is visible is a clear indication of the substantial force used.

Risa is one of four recipients of the Syracuse University Martin Luther King Jr. Unsung Heroes award. She will be receiving the award during a ceremony on Jan. 21 for her tireless activism. Both Risa and Adam are working-class Latino/a students. They are well-known and respected for their community activism.

According to Adam, the police officer focused his attack on Risa as "a clear form of intimidation to try and ‘hurt’ the woman while the male partner is next to her. This is meant to pressure the male to respond and escalate the situation further.”

“The intimidation and fear the officer tried to impose on us, though, is minute compared to the physical and psychological harassment meted out to poor and working-class people of color in the Syracuse community everyday. Every occupier should be aware now, if they mistakenly were not before, that the police are not our friends; they are not part of the 99 percent and their only tactic of social control is intimidation and violence," added Adam.

Adam and Risa are working with the ANSWER Coalition to file a complaint with the Citizen Review Board and the Syracuse Police Department.

In city after city, the police have proven to be loyal to the 1 percent. Regardless of what each individual police officer may think about the Occupy movement, as an institution the police have served only to repress and attack the movement. The Jan. 19 raid on Occupy Syracuse is just the latest example.