Community stands up to police and prison brutality 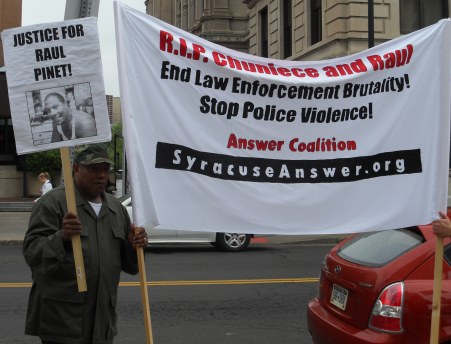 Raul Pinet Sr. holds a banner during the Aug. 6 protest. 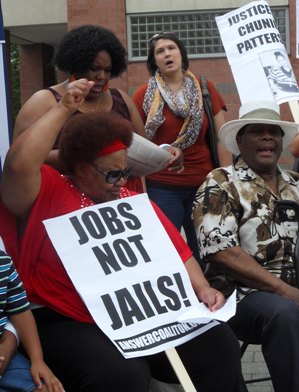 Protesters let their voices be heard through chants, placards, and speeches.

On the heels of yet another incident of police brutality, members of the Syracuse community converged on the Onondaga County “Justice” Center, right next to city police headquarters, to protest law enforcement brutality. The protest took place on Aug. 6, exactly one year after Raul Pinet Jr., a 31-year-old Puerto Rican man, was killed by Sheriff’s deputies. Despite the rain, more than 50 people came out to attend the multinational protest.

The demonstration began with chants led by ANSWER organizer and rally emcee Derek Ford and Marissa Bryant, a close friend of Chuniece Patterson. Chuniece, a 21-year-old African American woman, was killed by neglect at the jail. She died from a ruptured ectopic pregnancy. She was repeatedly denied medical care by deputies and a jail nurse, and spent the last 14 hours of her life suffering in immense agony. New York state officials have ruled that her death was entirely preventable.

The event was organized by the United as One Coalition, of which the ANSEWR Coalition is an active and founding member. One by one, community leaders and organizers took to the microphone in demands for justice.

After an opening prayer by Rev. Kevin Agee, LULAC (League of United Latin American Citizens) president Luz Encarnacion spoke, accompanied by Raul Pinet Sr. Encarnacion condemned the District Attorney and Sheriff for the veil of secrecy surrounding the investigation into Pinet’s death. “We know that policies and procedures were violated when Raul was brought into the jail,” she said. “How have the deputies involved been punished?”

Sally Johnston, president of Disabled in Action, spoke about the poor treatment of Disabled prisoners. She reminded the crowd that many of the people in the “Justice” Center have not been convicted of any crime, but are awaiting trial.

Next, Preston Fagan, president of the local NAACP chapter, spoke about a recent police shooting. On July 30, city police shot and killed Dominique Smith on the city’s southside. Police said that Smith shot at police officers. The bullet that killed Smith, however, entered through the back of his neck and exited through his mouth, indicating that Smith was turned away from the officers.

Barrie Gewanter, director of the Central New York chapter of the CNY, emphasized the united, multinational character of the demonstration and the movement in general. "I've been in Syracuse for 20 years," she said,  "and this is the first time I've seen the Black community, Latino community, Disabled community, and LGBT community united like this."

“They are committing character assassination out there,” Fagan said. “By that, I mean they are painting every victim of police brutality in the worst light possible.” Indeed, the victims of police brutality, especially those murdered by police, are usually tried post-mortem in the press, in full cooperation with police departments.

Adam C’Debaca, an organizer with the ANSWER Coalition, closed the rally. C’Debaca told the protesters that the police and prisons serve to protect the interests of the ruling class: "These are not accidents, these are not aberrations, these are not exceptions to an otherwise well- functioning state and judicial system—they are the rule. "

C'Debaca continued to give an impassioned speech about the need to organize and fight for a new society, one that “places the needs of people before private property.”

The success of the protest was a testament to the determination of the Syracuse community to put an end to abuses by the police department and prison system. Last year, in Sept. 2010, the United as One Coalition organized an unprecedented march on the jail. Since then, organizations involved in the United as One Coalition have fought against police surveillance cameras, spoken out at city common council and county legislature hearings, held community forums and organized “know your rights” trainings on how to handle encounters with law enforcement. To get involved in the campaign, contact [email protected].

No police violence! No more deaths in the jails!