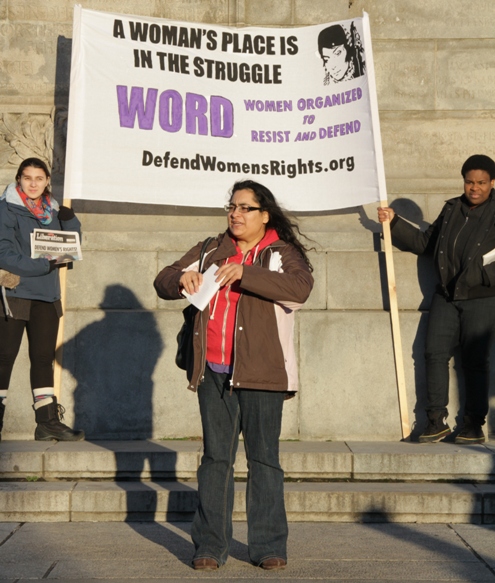 Rally organizer Rebecca Fuentes speaks to the crowd about the migrant woman's struggle.

In Syracuse, the local branch of WORD (Women Organized to Resist and Defend) held a rally and speak out in support of women’s rights on March 8. As rally emcee Erin Kinsey mentioned at the start of the rally, this event was especially necessary in the current political climate of conservative attacks on reproductive rights, draconian economic policies that disproportionately affect women, and an array of other issues. Over 30 people attended the International Women’s Day Rally and rally organizers gave brief speeches highlighting local struggles related to women’s rights.

The local issues highlighted were the criminal injustice system, immigrant rights, and transgender rights. Maddie Horrell opened the speeches by talking about the importance of struggle in winning and defending gains. She also mentioned the case of Chuniece Patterson, who was allowed to die of a ruptured ectopic pregnancy while in the local jail, and the way the prison industrial complex specifically targets women of color.

Next Rebecca Fuentes, a local immigrant rights activist, took the stage accompanied by Arley Orozco, a woman currently facing deportation due to the racism and sexism of New York State Police, Border Patrol, and Immigration and Customs Enforcement. Because of local organizations like the Worker’s Center of CNY and ANSWER Syracuse that mobilized and fought back, Orozco’s deportation hearing has been postponed until her children finish the school year. Fuentes told the crowd, “Migrant women don't need our pity. They need our respect." She also criticized politicians and police when she stated "I'm sick of politicians saying one thing and doing another thing. It’s the same with the police. They are supposed to protect us, but they are a danger to us."

Lastly, Nikeeta Slade spoke about the importance of transgender rights, and especially the struggles of transgender women of color. She briefly discussed the case of LaTeisha Green, a local Black transgender women who was murdered in 2008. Slade tied her murder to the larger issues of structural transphobia enacted by the state, including invasive TSA pat-downs and the unwillingness to provide transgender people with identification that reflect their gender identity.

Towards the end of the rally, Erin Kinsey opened up the space for other attendees to speak out about the importance of women’s rights. One attendee, Michael Kowalchuk, an LGBTQ activist, mentioned Cuba as a country that is actively working toward abolishing sexism to contrast with our own. Examples like these are important to show that sexism doesn’t have to be a defining feature of our own society if we diligently and actively fight to get rid of it.

When asked why he attended the event, Billy Kluttz, a student at Syracuse University said “We need activism that gives voice to the oppressed. We need activism that calls us into the streets and into community to affirm our humanity and dream together of what a truly liberated world might mean.”

Not only must we dream of what this liberated world might look like and mean, we must actively struggle to create it.