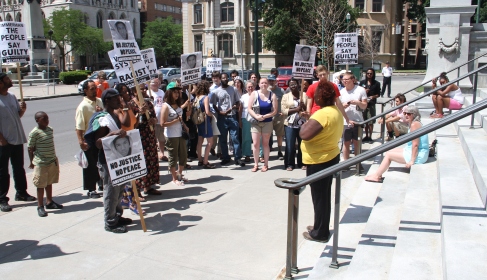 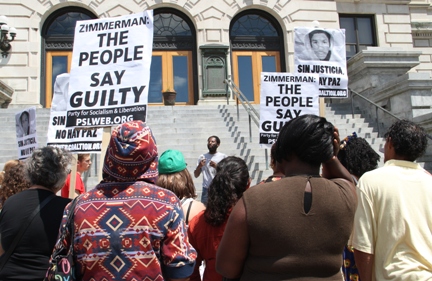 Aly Wayne speaking to the crowd 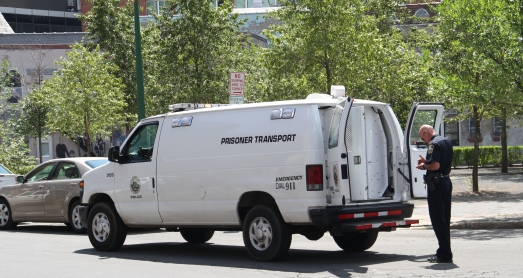 The police swarmed the rally to intimidate protesters. No one was arrested.

Well over 60 people assembled in downtown Syracuse on July 14 for an emergency rally for Trayvon Martin, less than 24 hours after George Zimmerman was found not guilty for the cold-blooded murder. The rally was organized by Syracuse activists immediately after the verdict was handed down. Several groups helped mobilize for the event, including ANSWER Syracuse, National Action Network, WORD (Women Organized to Resist and Defend) and the Party for Socialism and Liberation.

The event attracted a large and diverse crowd, despite being organized in a very short amount of time. Most of those in attendance had heard about the rally by word of mouth or online. Protester Charles Pitts said that he immediately went online to see what was being organized in Syracuse in response to the verdict.

Derek Ford, one of the rally’s organizers, emceed the event. He stood on the steps of the Onondaga County Courthouse to open the rally. “We are all outraged at the verdict that was handed down yesterday, but we also aren’t surprised,” he said. “It’s yet another affirmation that the systems we live under—the legal system, the political system, the economic system, and the social system—are deeply and fundamentally racist.”

Another rally organizer, Nikeeta Slade, spoke about the fact that racist violence affects not only young men of color, but also women and LGBTQ people. After Slade spoke, Ford opened up the floor to allow others to speak their mind.

Aly Wayne pointed to the systematic nature of racism, making it clear that this injustice wasn’t just the fault of six jurors in Florida. “I cannot trust this system,” which he said “has no respect for my body.” This was after Wayne mentioned the case of Marissa Alexander, a Black woman who was sentenced to 20 years in jail for firing shots into a ceiling to scare off an abusive partner.

Helen Hudson, longtime activist with Mothers Against Gun Violence, expressed her empathy for the Martin’s family. “Those poor parents had to relive their son’s murder over and over,” she said.

At the end of the rally, a swarm of police showed up. There were eight police cars and a prisoner transport van. In a clear act of intimidation, police rushed out of the van and began waving around a bag full of handcuffs. Several protesters immediately began confronting the police while others began documenting their actions.

Although the rally had officially ended, most demonstrators stayed to defy the police. No one was arrested. Rally organizers and Helen Hudson are going to follow up about the police intimidation at the event.