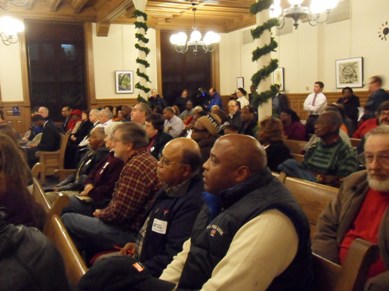 The following statement was issued by the Syracuse ANSWER Coalition on Dec. 29:

The mood was joyous tonight in the Syracuse Common Council chambers, as the Council voted unanimously to pass revised legislation for the city’s Citizen Review Board.

Workers, students, and activists from a vast array of community organizations occupied the Council chambers to ensure that the legislation passed. This was the latest in a long series of community actions fighting against police brutality and misconduct.

The community has been fighting for the revised legislation since Feb. 2011, when Mayor Stephanie Miner unilaterally disbanded the existing CRB by firing administrator Felicia Davis. The CRB that Davis oversaw was fundamentally flawed and essentially ineffective. Over a decade ago, the Police “Benevolent” Association filed a lawsuit against the city, the outcome of which essentially gutted the legislation of any power.

The victory for the police was a devastating loss for the people.

When Miner fired Davis, it gave new breath to the struggle for an effective CRB. An ad hoc committee was assembled by Pam Hunter, then head of the Public Safety Commission, which included representatives from the NYCLU and NAACP. The committee also included police chief Frank Fowler, indicating from the get-go that the new legislation would necessarily be limited.

As of last month, there was a new CRB that was sworn in and ready to go. The problem was that the only legislation on the books had no teeth. The Council was supposed to vote on the legislation before the end of its regular meetings in December, but interference from two Democrat councilors, and Pat Hogan in particular, prevented that from happening. It took a concerted, prolonged and ultimately successful community effort to force the Council to hold the special session tonight so that the legislation could be voted on and passed before the end of 2011.

It can’t be stressed enough that tonight’s victory happened because of the people, not because of the politicians. The outrage expressed by the people of Syracuse over this past year, coupled with story after story of police misconduct, left the Councilors little choice but to vote yes. In the absence of a community movement, it is unlikely that we would be celebrating at this moment.

The struggle isn’t over

The police union, misleadingly called the “Benevolent” Association, attacked the previous CRB legislation. The major problem that the police have with the CRB concerns its subpoena powers. Police officers have no problem showing up to court to testify against us. A lot of police even show up to court on their days off. But they refuse to testify against their fellow officers.

Police union president Jeff Piedmonte has stated publicly that the police have already begun preparing for an attack on the current legislation. Piedmonte told the Post Standard that “We’ve been preparing legal papers so that if the CRB issues subpoenas again, we’ll be prepared to go back to PERB [Public Employee Relations Board] and back to court.” (Post Standard, Dec. 26)

We have to defend tonight’s victory at the same time as we fight to strengthen the CRB. The new legislation includes a timeline that gives the CRB 60 days to finish an investigation. It also allows the CRB to conduct its own investigation before the police have finished their own. But the legislation doesn’t give the CRB any real disciplinary power—it can only make recommendations to the police. Ultimately, we need a CRB that has the power to independently discipline offending officers.

The ANSWER Coalition has been actively struggling in the streets against police brutality and misconduct, and we will continue to do so. But we also recognize the importance of having a formal, independent mechanism through which to file a complaint. We applaud the Syracuse community and the various organizations that made this victory possible, including the National Action Network, NYCLU, NAACP, and United as One Coalition.