Syria Crisis: The maneuvers at the United Nations in perspective 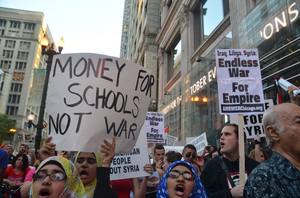 Having been forced to back off from a threatened military attack on Syria by intense international and domestic opposition, the Obama administration is now seeking to lay the basis for a UN Security Council-sanctioned assault.

On Sept. 13, an agreement was reached between Russian Foreign Minister Sergei Lavrov and U.S. Secretary of State John Kerry on a plan to dismantle Syria’s stockpile of chemical weapons. The government of Syria expressed support for the agreement, while the Syrian armed opposition has condemned it.

Having been delayed in carrying out a direct military attack, the United States, Britain and France are seeking to use any UN Security Council resolution as the basis for a renewed push toward a Pentagon bombing campaign. Russia and China, which hold the two other seats in the Security Council, are attempting to word any Syria resolution in a way that prevents it from being used or interpreted as a rationale for such an intervention.

The ANSWER Coalition (Act Now to Stop War and End Racism), which organized protests around the country in the weeks prior to Obama’s announcement that he was pulling back from an imminent military attack on Syria, stated: “We believe that the issue of chemical weapons is being used as a pretext for greater intervention by the United States, Britain and France to carry out a larger but unstated agenda in the Middle East, which is to destroy every single independent, nationalist government in this oil-rich region.”

The United States has more than 5,000 nuclear weapons and is providing more than $3 billion each year to Israel, which has a large stockpile of chemical and biological weapons and, even more importantly, a large number of nuclear weapons. When the United States demanded last week that Syria’s chemical weapons stockpile be destroyed, they made sure to avoid language calling for a regional ban on such weapons since it would have highlighted the fact that the U.S. government’s principal ally, Israel, possesses these weapons.

Maneuvers at the United Nations

The plan agreed to by Syria calls for the Syrian government to turn over a list of its chemical weapons and where they are stored by Sept. 21. UN weapons inspectors are to arrive in Syria by mid-November and the weapons are supposed to be destroyed by the middle of 2014.

The agreement is being turned into a UN Security Council resolution. Kerry is demanding that the resolution include authorization for military strikes on Syria if it is deemed to not having sufficiently complied with the resolution. But the Russian government opposes this provision, and Russia is one of the five states that have veto power in the Security Council.

Both Obama and Kerry have repeatedly threatened that the United States could still carry out a unilateral attack on Syria, regardless of the wording of a UNSC resolution.

The rationale for the U.S. threats of military action was a chemical weapons attack in Ghouta and the surrounding area east of Syria’s capital Damascus on Aug. 21. Obama and Kerry have blamed the Syrian government for the attack from the start. More than a year ago, the President Obama declared that use of chemical weapons by the Syrian government would cross a “red line,” triggering a U.S. military response.

A team from the Organization for the Prohibition of Chemical Weapons had arrived in Syria on Aug. 18 to investigate an earlier alleged use of chemical weapons in the city of Aleppo.

That the Syrian government would launch a large-scale chemical weapons attack immediately after the arrival of the OPCW team in the country seems illogical, even more so given that the government forces have been making major gains in the war over the past several months.

The OPCW team conducted an investigation of the Aug. 21 attack and issued its report to the UN on Sept. 16 confirming that a chemical weapons attack had taken place, but not assigning responsibility. While the United States, Britain, France and Turkey have all blamed the Syrian government, the Syrian government has adamantly denied using chemical weapons and accused the opposition of staging a provocation to justify a U.S./NATO assault.

On Sept. 18, the Agence France Presse reported that the Syrian government had forwarded “new evidence showing it was opposition forces were behind the sarin attack” to the UN.

Besides responsibility for the Aug. 21 attack, the OPCW report leaves other unanswered questions. The Ghouta area is in Syrian opposition hands and the report states, regarding evidence the OPCW was collecting: "During the time spent at these locations, individuals arrived carrying other suspected munitions indicating that such potential evidence is being moved and possibly manipulated."

The OPCW report does not include the estimated death toll. While the United States claims that at least 1,429 were killed, Britain and France have reported far lower figures, 350 and 281 respectively.

The report states that a deadly nerve gas, sarin, was delivered by M14 artillery rockets. But the question of whether the armed opposition possesses such munitions and sarin gas itself is not addressed.

There have been numerous reports of rebel forces possessing and seeking to produce sarin. On Sept. 13, the Los Angeles Times reported that a Turkish prosecutor had indicted six members of the Syrian opposition for attempting to procure precursor materials for creating sarin. The government of Turkey, it should be noted, has been strongly supporting the opposition.

The opposition Syrian National Coalition and “Free Syrian Army” have expressed bitter disappointment that the U.S./NATO air strikes they were hoping for did not materialize. They were counting on foreign intervention to tip the military balance in their favor, as it has become clear that they cannot win without it.

While it is worthwhile to skeptically examine the claims of those who are set on attacking Syria, the people’s opposition to a new imperial war against Syria should not be premised on whether or not chemical weapons were used either by pro-government forces or by the armed Syrian opposition. Rather it is necessary to expose the imperial motives of the United States, Britain and France, who are seeking any pretext to carry out their semi-colonial designs on the peoples of the region. These same imperialist forces have used nuclear, chemical and biological weapons. Imperialist powers do not go to war because of “moral outrage” about the use of any particular weapon.

While the Obama administration was forced to pull back from military strikes, it has not given up on the objective it shares with the 11 other presidencies dating back to World War II: domination of the oil-rich and strategic Middle East. That means the anti-war movement must stay on alert.