Take to the streets on International Women’s Day – Sat., March 8 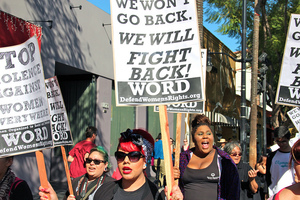 "Women’s rights are under attack - What do we do? Stand up, fight back!"

Take to the streets on International Women’s Day – Sat., March 8!

On March 8, International Women’s Day, WORD (Women Organized to Resist and Defend) will hold actions in cities across the United States. We will be taking to the streets in defense of women’s rights, which are under attack on many different fronts.

Violence against women is an epidemic in U.S. society. One in three women will experience violence from their partner in their lifetime. But the epidemic isn’t limited to sexual assault. 53 percent of anti-LGBTQ homicides are against transgender women. Domestic violence is a widespread problem that is not remotely addressed by the sexist, racist and bigoted (in)justice system.

Marissa Alexander’s case—among many others—highlights the contradictions of a society that punishes victims of abuse when they defend themselves. Marissa Alexander is a 33-year-old African American woman, mother and survivor of domestic violence. Under mandatory minimum sentencing laws, Marissa was sentenced to 20 years in prison for defending herself against an abuser in the same state that let George Zimmerman walk free. Though the original sentence was thrown out by the judge, Marissa is still being prosecuted. All charges against Marissa should be dropped! We must stand with Marissa, demand her freedom and fight to end all forms of violence against women!

The society we live in not only condones and minimizes sexual assault and all violence against women, but blames and criminalizes the victims. Last year, in Stuebenville, Ohio, authorities covered up rape until the community protested. Two years prior, school authorities and the police colluded to punish 17-year-old Rachel Bradshaw when she reported being sexually assaulted. We must stand up against this system that protects the attackers and isolates the victims.

The treatment of women in a society is a direct reflection of their position in that society. In this society, women are not guaranteed full rights, either to equal pay or to control over our own bodies. At the same time that violence against women is condoned, reproductive rights are under heightened attack. The year 2013 nearly broke the all-time record for the most new restrictions on abortion passed in a single year.

More anti-choice laws have been passed in the last three years than in the entire previous decade. While Roe v. Wade still stands, in many places women are unable to actually get a safe and legal abortion. Focusing particularly on Southern and Midwestern states, the right-wing campaign is trying to chip away at the rights won by the Roe v Wade decision. They were defeated in Albuquerque in November but have been successful in other states and have introduced new legislation that will be considered this year in North Dakota, Ohio and elsewhere.

We must unite and fight the economic, political and social attacks on women’s rights. It is up to us to make 2014 a turning point for women’s rights! We will not allow the politicians to define 2014 as a year of continued attacks on women’s reproductive rights, which is why we must take to the streets to stop these attacks. International Women’s Day—a day of protest and celebration across the world that originated with the protest of women against exploitation in the factories—is an important day for us to gather and take action to resist these attacks and defend women’s rights.

Join us in saying:

Women’s rights are under attack - What do we do? Stand up, fight back!

Join WORD on March 8 in a city near you or call an action in your city and add it to the list!