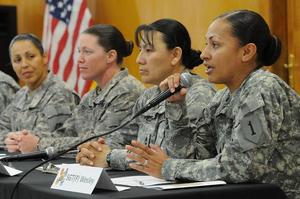 2. 1/3 of female GWOT veterans report having been sexually assaulted

3. 47 percent of women who did not report an assault identified “fear of retaliation and reprisal” as the reason for not reporting

5. 43 percent of victims had heard of the negative experiences of other victims who had reported assault

6. 74 percent of women who reported their abuse were forced to overcome at least one or more barriers in the reporting process

10. Currently, officers and high-ranking commanders are the sole deciders of which cases of assault to prosecute in their units

*Note: This fact sheet does not include statistics for men in uniform, who are estimated to account for 53 percent of military sexual assaults (due of the dramatically higher number of men in the military). It is estimated that only 13 percent of men in the military report their sexual assaults. At least 13,900 men were sexually assaulted in uniform in 2012.