The ANSWER LA Office is Moving! 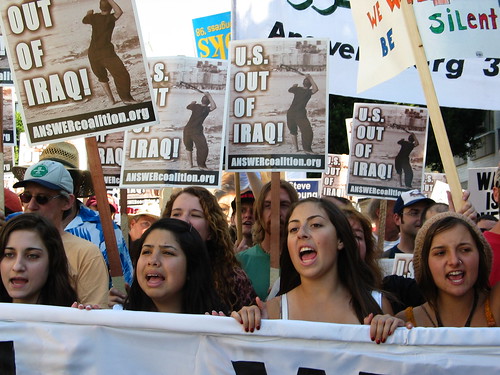 We are very excited about an opportunity that will allow us to greatly expand our organizing and activist base, and strengthen the position of ANSWER as a vital progressive organization in the years to come.

For nearly 7 years, our Koreatown office has been located at 137 N. Virgil Ave. The office has served us well, but we’re excited to bring this organizing hub to the heart of Los Angeles in a dynamic new space in Downtown LA.

We have taken a long-term lease on a wonderful location. It is an attractive storefront by 3rd St. and Main St., just blocks away from City Hall, Ronald Reagan State Building and other key locations for action. Our new office is ADA accessible, and walking distance from the Red Line, Gold Line, Silver Line and many bus routes.

Our immediate challenge is to raise $10,000 in the next month for necessary construction, carpeting, electrical, plumbing and other materials to transform the building into the great asset for the progressive movement that it can be.

We are making an urgent appeal to you to help us meet this goal. Your donation can be tax-deductible if made to the Progress Unity Fund.

We are also hosting an Office Farewell Party at our Virgil Ave location on Saturday, February 9, starting at 8pm, featuring DJs, musical performances and spoken word!

Most of you reading this have generously supported the activities of the ANSWER Coalition. With a volunteer staff and a shoestring budget, we have rarely had to appeal for funding a specific organizational purpose.

As the ANSWER Coalition has been fighting in the streets for more than 11 years, it is worth reviewing the accomplishments over the years to illustrate the importance of your contribution to our building fund.

Please consider what you can donate to making this opportunity a reality. Tax-deductible donations can be made to Progress Unity Fund by check, credit card or online.

Peace will never be possible without justice. ANSWER is engaged in opposing racism, discrimination, bigotry and exploitation. We fight for the rights of labor, immigrants, for a healthful and sustainable environment, and the realization of all the necessities of life, including the right to a job, housing, education, health care and nutritious food.

The majority of humanity shares these aims. But the aspirations of the people here and around the world are in direct conflict with corporate globalization and the military-industrial complex, for whom profit and domination are all that matters.

As the history of the last century has clearly demonstrated, real progressive change can only be achieved by a powerful and organized people’s movement. Building such a movement is the goal of the ANSWER Coalition.

Please consider how you can help make our new location a success for the struggle.

P.S. Your donation to Progress Unity Fund/ANSWER is tax-deductible. Let’s keep as many anti-war dollars as possible out of the hands of the Pentagon.