The blockade against Cuba and providence 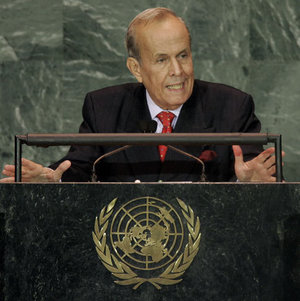 The following article, published in the Chilean magazine Punto Final on Oct. 25, 2013, was written by Ricardo Alarcón de Quesada, Ph.D. He is a former President of the National Assembly of the People’s Power, the national legislative body of Cuba.

In his message to the nation on Sept. 10, President Obama emphasized the United States’ exceptionality.

“What makes America different [...] what makes us exceptional,” according to him, is that his country acts “with humility, but with resolve” in the face of violations anywhere. Unhesitatingly, he affirmed that “for nearly seven decades, the United States has been the anchor of global security. This has meant doing more than forging international agreements — it has meant enforcing them.”

A short while later, he reiterated that idea before the General Assembly of the United Nations, at the opening of its 2013 session.

It is a formula that has been stated before by his predecessors in the White House and also by most of the politicians in his country. When using that rhetoric, Obama certainly does not display exceptionality. It is more of the same.

The idea that the powerful nation is different from all others, that it supposedly embodies superior values and that it is destined by the Supreme Being to fulfill a divine mission is rooted in the minds of the WASP (white, Anglo-Saxon Protestant) elite.

Other sectors usually believe the same because, ever since [Antonio] Gramsci [founder of the Italian Communist Party], we know that in every society the dominant culture is the culture of the dominant classes.

It’s quite an old idea. It was mocked, more than a century ago, by Otto von Bismark: “God has a special providence for fools, drunks and the United States of America.”

But it is also a very dangerous belief. So much so, that those who provoked World War II and its horrors believed blindly in their superiority and exceptionality and were confronted precisely by the United Nations Organization.

It is odd that Obama brought that speech back to the U.N. There, he will be able to prove whether “ensuring that international agreements are enforced” is something he said seriously or was only an expression of cheap demagoguery.

On Oct. 29, the World Assembly will reject once more – as it did 22 times before – the economic, commercial and financial blockade that Washington imposes on Cuba. Like every other previous year, the United States will be isolated, barely accompanied by Israel, its faithful ally, and one or two American satellites in the Pacific who will give him their vote, even though none of them practice the blockade.

Since 1992, year after year, the General Assembly of the U.N. has approved, by a wide majority, resolutions condemning the blockade. Obviously, they are “international agreements,” but instead of “ensuring that they’re enforced,” Washington has ignored them. Worse yet, it not only persists in a universally condemned policy but also intensifies it.

Washington tries to impose it upon others, forcing companies and people who are outside U.S. jurisdiction to obey it or punishing them, violating other nations’ sovereignty and causing huge harm and much suffering to the Cuban people.

It is the most rigorous and prolonged genocide in history, lasting more than half a century. Under Obama’s mandate it has been reinforced, because the current president persecutes Cuba’s transactions with other countries and foreign banks with more zeal than George W. Bush.

Every year, Cuba reports on other actions of that type carried out by Washington since the previous session of the Assembly. They involve voided contracts, interrupted operations, supplies suddenly canceled by third-country companies once they’ve been acquired by U.S. corporations.

In many cases, they involve longtime partners from whom Cuba purchased equipment, parts of products that were indispensable for hospital services or the medical treatment of some diseases or ills.

The Cuban children who are brought to our Children’s Cardio-centers are forced to learn at an early age the cruelty of the blockade and the insensitivity of the bureaucrats that enforce it. Those children and their mothers know better than anyone else the painful reality of genocide.

And they also know, perfectly, what the words of the American president are worth.