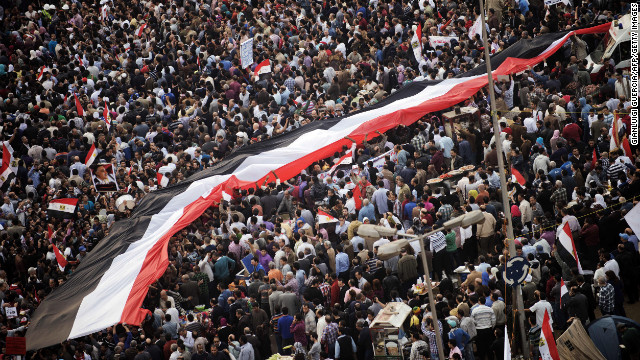 On January 25th, the ANSWER Coalition held a community forum entitled “The Egyptian Revolution Continues,” that was attended by a multi-national crowd of about sixty people.  Two ANSWER organizers, Salma El-Shakre and Omar Ali, both Egyptian American activists, had just returned from Egypt and offered their assessments of the ongoing social changes taking place.

Jan. 25, 2013 marked the second anniversary of the start of the Egyptian Revolution. El-Shakre recounted the stages that the revolution has passed through, illustrating the determined and courageous struggle by millions of people in the face of fierce repression.

“The revolution's demands are 'Bread, Freedom, and Social Justice.'  None of which have been accomplished through the transitional period and the current government,” stated Ali..  The speakers discussed the ways in which since being elected Mohamed Morsi of the Muslim Brotherhood has, in El-Shakre's words, “continued to appoint ministers from the outgoing government and Islamists, without incorporating any of the other revolutionary or liberal forces.”  The policies of the Egyptian state have continued to rely on IMF loans which in turn rely on the Egyptian state's promotion of the interests of the United States and Israel.  Meanwhile, the majority of Egyptians continue to live with scarcity.

The speakers noted the difficulties of finding labor or political leadership in the wake of a harsh military dictatorship that crushed any attempt to organize against it. A population proscribed from political activity for over thirty years is necessarily untested in political organization. One result – and a major problem for the revolution -- is the absence of a mass revolutionary party. But El-Shakre and Ali expressed confidence that the austerity being imposed on the Egyptian people by the Muslim Brotherhood would lead to the fall of the Morsi government, and expressed belief that the next wave of revolts will be led by the most oppressed sectors of Egyptian society.

Watch video of the presentations.