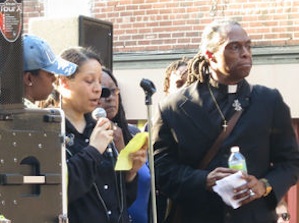 Mark Carson's aunt, Florine Bumpars, speaks about her murdered nephew at May 20 protest

The killing of Mark Carson, a 32-year-old gay man from Brooklyn, on May 17, in the heart of Greenwich Village marks a tragic boiling point in a recent string of homophobic bashings in Manhattan that has left the LGBT community reeling with anger and fear but also a readiness to fight back.

Mark Carson was shot in the face and died immediately, after enduring homophobic slurs from anti-gay bigots. His killing occurred just blocks from the site of the Stonewall Rebellion that sparked the modern LGBT liberation movement in the United States, in an area known for decades as an LGBT center. Carson's death and the heavy increase in bashings in recent weeks have forced into light what queer people already knew, that despite considerable progress, LGBT people still live with daily discrimination, harassment and violence in this country.

The NYPD has announced a stepped-up police presence in the neighborhood that promises to last through June’s Pride celebrations. That the Pride celebrations are meant to be a reminder of the Stonewall Rebellion, where queers in the village revolted against police harassment, violence and occupation of our neighborhoods, is sure to strike many in the LGBT community as a cruel twist of fate. Given the NYPD’s continued harassment and violence against LGBT people, especially young people of color, this type of solution is sure to exacerbate, not lessen, the problems faced by LGBT residents.

The media and politicians seem unwilling to address the fact that the underlying problem is a system that pits one sector of workers against another through bigotry and fear.

The media and politicians seem unwilling to address the fact that the underlying problem is a system that pits one sector of workers against another through bigotry and fear. They are also unwilling to point the finger at those truly responsible for the hatred that manifests itself in horrific acts of violence on the streets, those homophobic politicians and public figures who preach violence and bigotry against LGBT people on a daily basis. No amount of reactionary police presence will alleviate these underlying causes of anti-gay bashings.

The LGBT community and its allies have responded to the murder by calling for community patrols and safety meetings. On May 20, thousands marched from the LGBT Community Center to the site of the shooting in a powerful display of resolve and solidarity. People connected with other members of the community, meeting friends on the street in a somber but hopeful event. People chanted “Hey Hey Ho Ho—Homophobia has got to go!” and “What was his name? Mark Carson!” and held signs that read “If a bullet should enter my brain, let that bullet destroy every closet door,” quoting slain San Francisco City Supervisor Harvey Milk. One group held a banner reading “We need a hospital—We don’t need condos” calling attention to the daily issues faced by LGBT and other workers.

This type of courageous response by the community is exactly what is needed most now. We need a people’s movement in the streets that calls out the system and its politicians for their culpability in the violence we are experiencing and calls for a fundamental shift in values. Mark Carson, Presente!