The people of Albuquerque derail plan to evict homeless 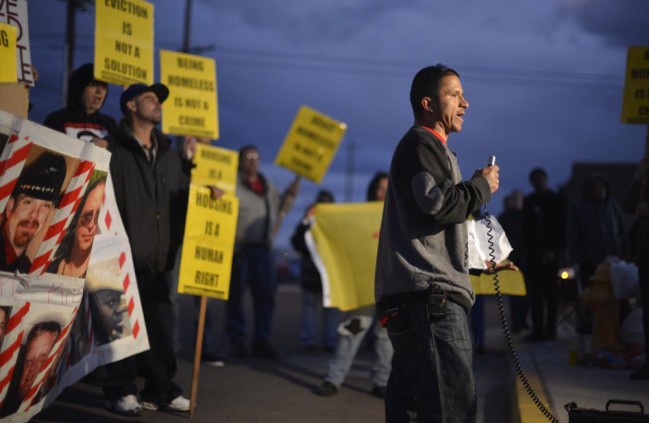 Tent City is a homeless encampment located immediately south of Downtown Albuquerque, in an inner-city neighborhood called Barelas, historically one of the poorest neighborhoods in Albuquerque. In 2000, almost half of the residents lived below the poverty line.

After weeks of maneuvering to destroy Tent City, which lies directly in the pathway of the City’s gentrification plans, Albuquerque city officials and police have been left with egg on their face.

With the eviction deadline staring them in the face, the Barelas Neighborhood Association and Barelas Community Coalition unanimously passed a resolution at the 11th hour voting to give permission to the homeless residents of Tent City to relocate to a nearby privately owned vacant lot. This is a major embarrassment for the City which had been claiming that the eviction process was being carried out at the behest of Barelas residents.

Tent City is just one of over 100 documented “tent cities” found in 46 states across the country, according to the National Law Center of Homelessness and Poverty. They spread like wildfire across the United States as homelessness increased and intensified with the 2007-09 economic recession.

“Homeless camps exist all over Albuquerque,” wrote ABQ Justice activist David Correia in a recent article for *La Jicarita*. “But they’re usually hidden out of view. Tent City is different. It’s large; it’s public; and it’s directly in the path of the City’s gentrification plans for downtown. The homeless residents of Tent City picked a spot along what the City of Albuquerque hopes to turn into a boulevard for the well-heeled pedestrians the City hopes will soon stroll between downtown and the newly redeveloped Railyards to the south.”

With spring comes the beginning of a new construction season. Tent City needed to go.

The Albuquerque Mayor’s Chief of Staff told local media that the city’s “goal” was to “start the move-out” as early as Feb 2. ANSWER New Mexico organized an emergency press conference at Tent City that morning in an attempt to preempt any eviction by the police. Local activists from ABQ Justice (a police brutality coalition) and the People’s Lapel of Albuquerque (a cop-watching outfit) had been spending time at the camp for months, getting to know the residents, providing much needed material aid and support. They stepped up their presence and outreach activities, virtually standing guard on a daily basis. Community members came from far-and-wide to drop off supplies.

All of this community activity tied the hands of the police. Community outrage over APD’s abuse of the poor and homeless is profound. Last March, James Boyd, a homeless man suffering from untreated mental health issues, sought refuge in the Sandia foothills, living out of a makeshift tent. He was shot and killed by APD officers for “illegal camping,” unleashing a tidal wave of organizing and activism against police violence and poverty.

In the new political atmosphere created by the murder of James Boyd, and with a higher level of community organization and consciousness, the Albuquerque police have not been able to act as freely as they desire.

Somewhat restrained by public outrage and activism, rather than just raiding the encampment, the City pursued what they hoped would be a less provocative coarse—a slower civil eviction—which would give the evictor the appearance of legal due diligence.

In order to ready public opinion for the eviction, city staffers increasingly utilized local media to criminalize the residents of Tent City.

In a display of “soft power,” Albuquerque police sent in its Crisis Intervention Team (CIT) and Community Outreach and Support Team (COAST) to “help out people who will accept it.” In a city where there are no year-round shelters, what this “help” amounted to was luring campers out of Tent City with temporary motel vouchers in exchange for giving up their tents. In other words, APD was presenting the homeless residents of Tent City with a choice: take a temporary motel voucher and leave, or we will be back later with an eviction notice and throw you out. Take your pick!

Once the vouchers expired after a maximum of seven days, people’s condition of homelessness would not have changed one iota. But that was not the point. The point was to score a public relations victory for the police, and scatter the residents of Tent City from gentrification’s ground zero.

The community stands up!

On Feb. 9, the police—as the enforcer of the capitalist system’s most sacred right, the right of private property—finally served a three-day eviction notice ordering Tent City residents to vacate the vicinity or be forcibly ejected and have their personal belongings disposed of.

A heroic attempt by local attorney Joe Coffey to file a petition with the court to stop the evictions was denied.

With the eviction deadline looming, ANSWER New Mexico, ABQ Justice, the People’s Lapel of Albuquerque and other progressive community groups and individuals, began preparing for an emergency mobilization—a speak out and community meal—in solidarity with Tent City under the slogans “Housing is a human right!” “Eviction is not a solution” and “Stop criminalizing the poor.”

On the day of the emergency mobilization, less than 24-hours until the eviction deadline, word began spreading that the Barelas Neighborhood Association and Barelas Community Coalition had taken the tremendous step of permitting the Tent City residents to relocate to a nearby property controlled by the BCC. In essence, this was the weeks of community activity reaching a crescendo.

The planned rally-potluck turned into a celebration.

Vincent Saint Vincent, one of the original five residents at Tent City, addressed the media: “It’s not just people suffering from drug addiction. There’s mental health issues, people that just fell on bad luck, people that come from different cities, and they come out of the Greyhound (bus station) and they’ve got nowhere to go. People who come back from the war and have nowhere to go. That’s what Tent City is.”

He then led a procession from old Tent City to the New Tent City, which was inaugurated with an outdoor community potluck drawing over a hundred people.

The City and the police had gotten themselves all ready for a raid, but instead had to watch the movement celebrate.

The class lines in this case couldn’t be clearer. In the interest of gentrification, the City and their instrument of coercion, the police, wanted to throw out the homeless. The working class of Barelas and Albuquerque fought them, and won a temporary victory.

The struggle of Tent City is going to enter the consciousness of the movement here, as has the struggle to win justice for James Boyd.