The pillaging of the Earth’s oceans 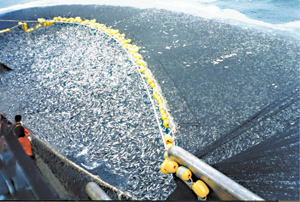 The oceans seem boundless in water, marine life and energy to sustain the planet’s life and atmosphere.

But the oceans are experiencing profound stress, due to escalating factors directly related to capitalist production and the degradation of the environment.

Alarming reports by marine scientists have been sounding the danger to the world’s oceans and the need for urgent action. The International Programme on the State of the Ocean (IPSO) warns that “massive marine extinction” already may be underway due to rapidly worsening stresses on marine ecosystems. But, as capitalism’s search for profits intensifies, the devastation of the oceans is only accelerating.

Three main stresses — global warming, acidification of the oceans, and decreased oxygen —have led to such declines in many of the marine ecosystems that the conditions have met or surpassed “worst-case scenarios” predicted in the first decade of this 21st century.

IPSO stated in 2011, “[W]e now face losing marine species and entire marine ecosystems, such as coral reefs, within a single generation. Unless action is taken now, the consequences of our activities are at a high risk of causing, through the combined effects of climate change, overexploitation, pollution and habitat loss, the next globally significant extinction event in the ocean. It is notable that the occurrence of multiple high intensity stressors has been a prerequisite for all the five global extinction events of the past 600 million years.”

Such a catastrophe would, needless to say, affect humanity and all life on Earth. Yet capitalists have rejected in international forums even basic accords to limit the exploitation of the oceans or to slow down the belching of fossil fuels into the environment. By far the biggest abuser of the environment is the United States.

The massive use of fossil fuels, deforestation and resulting accumulations of carbon dioxide (CO2) wreak perhaps the greatest environmental damage on the oceans. Yet, of all Earth’s ecosystems, the oceans have been the least studied and monitored.

The Pacific Marine Environment Laboratory at the National Oceanic and Atmospheric Administration estimates that 22 million metric tons of CO2 are added to the oceans every day.

The result is acidification. With increased acid, whole species — from phytoplankton to algae to corals to crustaceans to all types of mollusks, including oysters and clams — are threatened because the acid hampers or prevents their ability to form shells by their natural process of calcification.

Coral reefs are being killed by bleaching due to the rise in ocean temperatures. In just the last three years, there have been total die-offs of oysters in the Pacific Northwest, Maryland’s Chesapeake Bay and Florida’s Panhandle region due to acidification and changed salinity. As each species is interlinked with and dependent on another, there is a cascading effect with the death of any life form.

At the beginning of the Industrial Revolution, CO2 in the atmosphere was an estimated 228 parts per million. The New York Times reported this month that it has now reached 400 ppm. The first global 50 ppm increase took 175 years, while the second took just 30 years. The French Academy of Sciences National Committee on Global Change predicts the saturation could reach 700 ppm of CO2 in the earth’s atmosphere by 2100.

Before the high-technology development of giant fishing trawlers and massive industrial exploitation of the ocean, seafood delicacies like shrimp, oysters and salmon were not as easily harvested in the United States and developed countries. Those sea organisms could reproduce at a sustainable rate.

Today, in the United States, Europe, Japan and other industrialized countries, seemingly limitless amounts of seafood are available.

Starting in the 1980s, advertising that accompanied the great rise in industrial fishing and globalized trade, led to a great increase in production and consumption.

But the availability of “all-you-can-eat” lobster, shrimp and salmon comes at a high price, far beyond what one pays in a restaurant or grocery bill. For example, it takes five to eight pounds of fish to produce one pound of “farmed” salmon.

The extensive 2012 “State of the World Fisheries and Aquaculture” report of the UN’s Food and Agriculture Organization, FAO, shows that only 13 percent of the world’s fisheries — the natural giant reserves in the oceans — are exploited at a level that assures reproduction at a positive rate. About 57 percent of the fisheries are “fully exploited,” meaning they are at their maximum rate before sustainability is affected, while 30 percent are “over-exploited.” The latter means a net loss in the population.

Thus, overfishing has severely impacted 87 percent of the world’s fisheries.

Underdeveloped countries in Africa see their ocean fisheries exploited, often illegally or through unscrupulous contracts signed by governments with foreign fishing corporations. Lacking technology, the peoples of those countries cannot benefit from their own region’s resources.

With a worldwide system of planning and cooperation based on socialist economic principles, oceanic scientists, environmentalists and governments could abide by agreements to limit fishing. This way the fisheries could recover and provide for the long term.

Wipe out one species, then another

The jack mackerel is just one example of how, under capitalism, the corporations wipe out one species after another in the search for maximum profits.

Jack mackerel in the South Pacific was recently targeted after other major fish species declined. It now faces total demise. From an average yearly catch of 5 million tons by industrial fishers off the coast of Chile in the 1990s, it dropped to 700,000 tons in 2010.

The article quoted eminent oceanographer Daniel Pauly, who described the situation of jack mackerel in the southern Pacific as a dramatic indication of the ecosystem as a whole. “This is the last of the buffaloes,” he said. “When they’re gone, everything will be gone.”

Norwegian, Dutch, Chilean, Russian, Chinese and other super-trawlers are scrambling for the remaining jack mackerel, but scientists warn that a five-year ban is needed to have any hope of saving them. That is unlikely to happen.

Tuna has become highly prized for sushi and other seafood products. Now five of eight species, especially the Atlantic, Pacific and Southern Bluefin, are “extremely endangered” and face extinction unless harvesting them actually is halted. But several attempts to ban its exploitation have failed because of the bigger importers and producers.

The decline in any one species in turn affects the viability of other species, and the overall effect is magnified.

Weather in all its forms — seasons, storms, snow and rain — originates and is driven by the oceans. The differences in temperatures and ocean salt levels generate continuous currents and air circulation. The water that comes down from the skies to nourish life, the winds that cool and warm the land, these result from the oceans’ circulation, known as “thermohaline circulation.”

The major and continuing changes in salt content and CO2 levels, plus warmer ocean temperatures, are creating more intense weather storms on the one hand, and the quickening rate of ice melt.

The number of Category 4 and 5 hurricanes nearly doubled from the 1970s to the 2000s, from 50 every five years to 90 every five years. More than 100 million people live within three feet of average sea level. The poorest populations are the most vulnerable to global habitat changes, warming, and rising sea levels.

Environmentalists, oceanographers and other scientists frequently meet in conferences and publish analytical papers to warn about the urgent need for corporate restraint and environmental recovery policies. They provide critically essential knowledge and data. For the average person, knowledge and a more conscious personal environmental lifestyle are important.

But all these environmentalist practices can’t put a sufficient dent in the rapacious action of the capitalists.

The situation is indeed dire. But it is not a time to despair. It is a time to educate, to organize and to fight against capitalism’s destruction of the earth. And more urgent than ever is the need for revolutionary struggle and a socialist system to save the planet. It is not rhetoric, it is reality.