The war danger in Korea 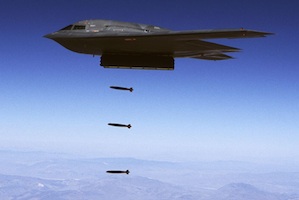 The American war propaganda machine does a thorough job in misleading the public about the high-stakes struggle the Pentagon is waging against North Korea.

On March 28, the Obama administration ordered and the Pentagon executed a mock bombing attack on North Korea by U.S. B-2 stealth bombers equipped to drop nuclear bombs—the most advanced nuclear-capable plane in the U.S. Air Force. In recent months, the U.S. has also used nuclear-capable B-52 bombers to simulate the bombing of North Korea.

The B-2s, each of which costs taxpayers more than $3 billion, dropped inert bombs near North Korea.

It is not necessary to speculate how the United States would react if North Korea sent nuclear-capable bombers close to U.S. territory and dropped inert bombs as part of a “war game.” By itself, this B-2 mock bombing of North Korea cost approximately $5.5 million, according to Foreign Policy magazine. The B-2 flights by some estimates cost $135,000 per hour—almost double that of any other military airplane, according to a report from the Center for Public Integrity.

It is not possible to overstate the impact on North Korea of this week’s simulated destruction of their country and people by U.S. war planes.

Between 1950 and 1953, U.S. bombers carpet-bombed North Korea so relentlessly that a main complaint of U.S. pilots became the absence of anything left to bomb. By July 1953, when an armistice was signed ending open military hostilities, there was not one structure standing higher than one story left in North Korea.

More than 5 million Koreans died during the war, according to the Encyclopedia Britannica of 1967. They died from bombs and bullets. They died from disease and exposure to the cold. They died in horrific massacres committed by retreating U.S. troops, who burned “pro-communist villages” as they were fleeing in retreat from North Korea in the face of a surprise counteroffensive launched by Chinese and North Korean units in late October 1950.

It was the United States that remained after the armistice to occupy South Korea with tens of thousands of troops. The Pentagon required that its occupying troops be exempted from ever having to stand before Korean courts if they were charged with the murder or rape of Korean citizens. South Korea’s military dictators, who had earlier served as proxies of the Japanese occupation forces prior to 1945, were more than happy to oblige their new bosses.

Under the tight control and supervision of the Pentagon, a brutal military dictatorship ruled South Korea for decades.

In 1961, General Park Chung-hee, formerly an officer in the Japanese Manchuko Imperial Army during the time of Japan’s brutal colonial occupation of Korea, seized power and held it until his assassination by other military officers in 1979. Any South Korean person who said anything sympathetic about communism, socialism or North Korea was sentenced to decades-long prison terms where torture was a given.

The role of the Pentagon and its continuing occupation has been decisive in Korean politics. After the assassination of Park Chung-hee, massive protests were staged in May 1980 against the military dictatorship in the South Korean city of Kwangju.

The pro-democracy movement in Kwangju was labeled “communist-inspired” and the rebellion was crushed in blood. More than 2,000 people were killed May 18 to 27, 1980. Later released secret documents revealed that it was the top brass of the U.S. occupation force that authorized soldiers of the Korean Army's 20th Division to be sent to Kwangju to suppress the protesting students.

The Pentagon and the South Korean military today—and throughout the past year—have been staging massive war games that simulate the invasion and bombing of North Korea.

Few people in the United States know the real situation. The work of the war propaganda machine is designed to make sure that the American people do not join together to demand an end to the dangerous and threatening actions of the Pentagon on the Korean Peninsula.

The propaganda campaign is in full swing now as the Pentagon climbs the escalation ladder in the most militarized part of the planet. North Korea is depicted as the provocateur and aggressor whenever they assert that they have the right and capability to defend their country. Even as the Pentagon simulates the nuclear destruction of a country that it had already tried to bomb into the stone-age, the corporate-owned media characterizes this extremely provocative act as a sign of “resolve” and a measure of “self-defense.”

As the Pentagon climbs the escalation ladder, North Korea will climb too. That is often how wars start.