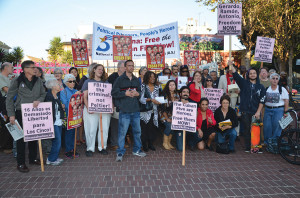 September 12 marked the 16th anniversary of the arrest of the Cuban Five- men who went undercover in Miami to thwart terrorist plots being hatched by right-wing enemies of the Cuban Revolution. As protests demanding justice for the three heroes who remain in jail took place in cities across the country, world-renowned Cuban poet Nancy Morejón visited San Francisco to lend her voice to the chorus.

The day began with an afternoon rally at 24th street in the Mission district. Many groups participated in the events sponsored by the National Committee to Free the Cuban Five, including Bay Area Latin America Solidarity Coalition, FMLN/ No.Calif-SF, Revolutionary Poets Brigade, AIM-West, Women Organized to Resist and Defend, Richmond Sister Cities, Workers World Party, the ANSWER Coalition, and the Party for Socialism and Liberation. A special surprise was when Ramón Labañino called from prison to greet the rally and Nancy Morejón. People cheered as they chanted to him, “Free the Five!”

After the action, Morejón performed a reading to around one hundred people at the office of the ANSWER Coalition. The reading included several pieces devoted to the Five, in which Morejón both celebrated the men’s heroism and tried to imagine the experience of their imprisonment, that have not yet been translated into English. Morejón and her translator then read pieces from Homing Instincts, a bilingual selection of Morejón’s work recently published in this country by Cubana Books.

After the reading, Morejón addressed the crowd. She said of the Five, “The very first of the Cuban Five that we knew of was Antonio Guerrero, he was a poet. But I would say that the other four were also poets.  They respect writing, and they respect poetry as a tool for changing the world. We change the world not only through social struggle, which is fair.  But you also change the world in your compositions, in your words, in your poems and your writing. In that sense, they have been very honest. They have a very special sense of being prisoners of the beginning of the twenty-first century. I do not know if you recall Che Guevara’s wonderful essay on the New Man and the New Woman. I do trust that the behavior of the Cuban Five is a taste of the ideal of the New Man.  Their imprisonment is a very special thing which does not only deal with loss, but it deals with the pressure of morality, the pressure of love for your homeland, and great love for the compatriots.”

When asked what advice she had for revolutionaries in the era of globalization, Morejón replied, “I don’t know how we’re going to get through the age of imperialism except to say: through organization. We must be birds of a feather flying together… But always there is humanity. Always there is the presence of Third World peoples around the world, the histories of Third World peoples in action. What is happening in the Middle East gives us a scope of what would be our future. It’s really hard to tell, other than to tell a solution to recommend: we have to read, we have to exchange, to communicate, and we have to know. And we have to be aware that the key is to be alive and to struggle against war, no matter who it is, no matter where, no matter how, we need to censor and accuse against violence, the violence of the state towards another state… We also denounce domestic violence. There are several levels. But you need to know that our contribution is just to be aware and to tell it on the mountains, everywhere.”

World-wide actions are taking place between September 4 and October 6. In Havana, three hundred delegates from 49 countries met for the X Colloquium: To Free the Cuban Five and Fight Terrorism. A picket at the White House and a Washington forum sponsored by the International Committee to Free the Cuban Five was also held.