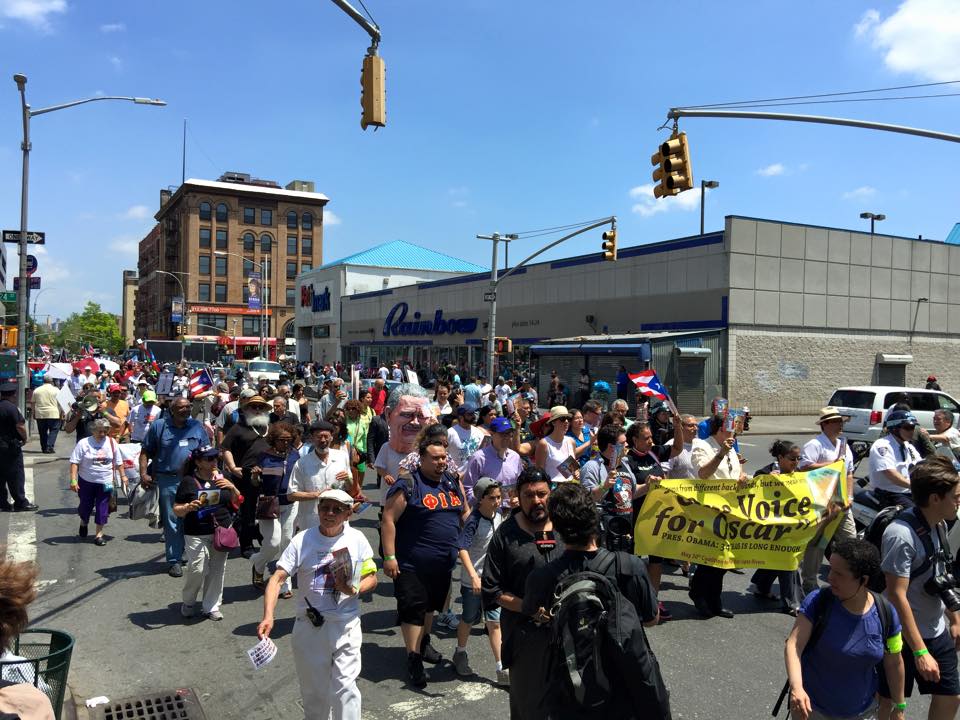 On May 30, over 5,000 people marched to demand the immediate release of Oscar López Rivera a Puerto Rican nationalist and community organizer who was convicted of seditious conspiracy to liberate Puerto Rico from imperialism. One of the longest jailed political prisoners in the world, he has been imprisoned in the U.S. for 34 years, 12 of which were spent in solitary confinement.

The march began in Harlem and continued through Spanish Harlem, also known as El Barrio. As the crowd marched down Lexington Avenue, people began flying Puerto Rican flags out of their windows. The march ended with a rally and speeches at 106th Street. Favorite chants included “Obama, listen to me – we want Oscar López free!” and “Libertad para Oscar! (Freedom for Oscar!)”

The multinational crowd included people who traveled from all over including Philadelphia, Pittsburgh, Chicago, and Atlanta. Marchers displayed internationalist solidarity with chants and signs drawing connections between Oscar López Rivera and other famous political prisoners like Mumia Abu-Jamal and Leonard Peltier as well as between Puerto Rican independence and Black and indigenous liberation. Connections were also drawn to Nelson Mandela, who was also charged with seditious conspiracy and imprisoned for 27 years by the white colonialist apartheid regime in South Africa. Mandela was also convicted of seditious conspiracy.

Liberation News spoke with Alejandro Molina of the Chicago chapter of National Boriqua Human Rights Network: “We wanted to use the fact that President Obama has only a year and a half left in his term to push for clemency for Oscar. We also wanted to tie this to the recent African-American struggle for civil rights.”

“Oscar’s struggle for freedom is directly tied to Puerto Rico’s liberation,” Molina explained. “There would be no Puerto Rican political prisoners if it were not colonized by the United States. The issue of Oscar’s release has widespread support in Puerto Rico among all parties. Oscar was not charged with a violent crime. The charge was political. The maximum term is 20 years and he has served 34. He needs to be released now.”