Thousands protest Wall Street and the warmakers outside the DNC 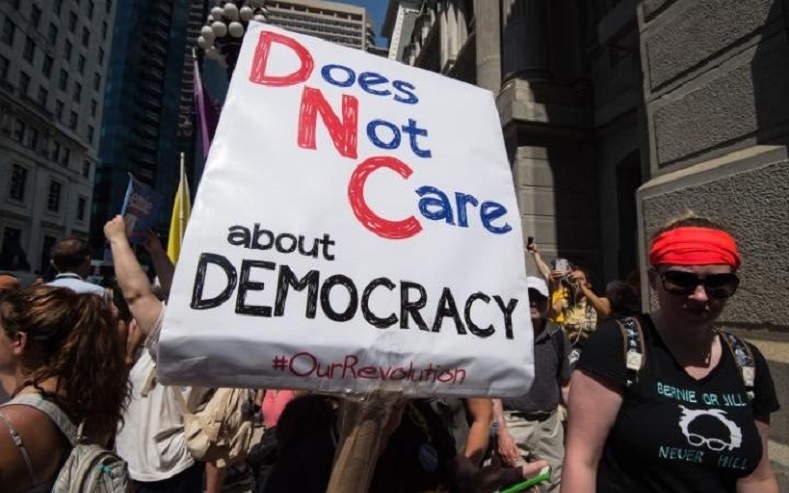 The ANSWER Coalition joined with thousands of people taking to the streets outside the Democratic National Convention to express our outrage at one of the twin parties of war and racism. After a hotly-contested primary that was effectively stolen by the Democratic Party machine, large numbers of people traveled distances short and far to be part of the actions.

Activities began even before the convention formally began, with a "march for a clean energy revolution" to demand radical action to confront the climate crisis. Later that evening, an event featuring Pam Africa, Eddie Conway, Ralph Poynter and many others demanded freedom for political prisoners.

Throughout the convention, thousands of supporters of the Bernie Sanders campaign defied the Democratic establishment and united under the slogans "Demexit Now!" and "Hell no DNC - We won't vote for Hillary!" Throughout the four days of the convention, several marches of many thousands made the long trek down from Philadelphia City Hall to the arena where the delegates were gathering.

Actions in solidarity with Palestine and against racist police brutality were held as well. The Democratic Party runs virtually every major city in the country - where the most sickening acts of police murder and terrorism often take place. They have also been loyal servants and strategists for the war machine, and their candidate Hillary Clinton promises to intensify this.

The ANSWER Coalition was proud to stand shoulder to shoulder with those who have been energized and outraged by the electoral developments of this campaign. To win, we need to organize and fight in all arenas.