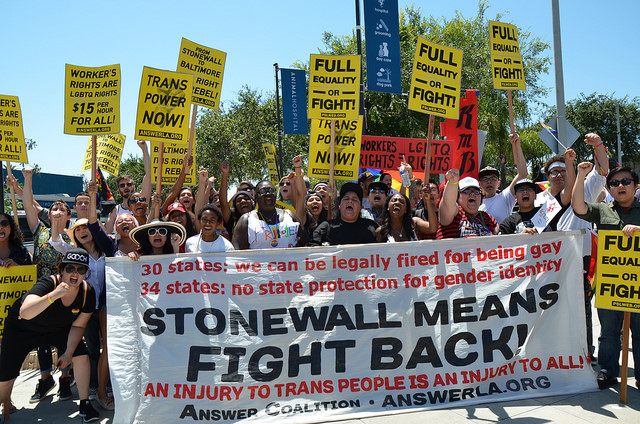 Let your voice be heard!
Speak truth to trans power!

In spite of the many victories, small and large, won by the LGBTQ, and particularly the transgender movement, there is a shocking rise in queer bashing, violence, and discrimination against trans people going on right now.

Bigots continue to spew hatred and incitement to violence. Right-wing thugs seek to attack members of our community. The police continue to harass and arrest transgender and gender non-conforming people.

Transphobia is at the root of the violence. Discrimination, and oppression affect all transgender and gender non-conforming people. Especially targeted are trans women of color who face constant threats and brutality, while politicians and the agencies of the state and the city turn their backs on the crimes of hate.

No one should be denied the right to a job or a safe space to live, or access to trans-sensitive healthcare, because of how they express their gender. Discrimination in employment forces trans people to resort to survival economies.

In Los Angeles, attacks on transgender women rose 46% last year and 100% of all anti-trans gender crimes were violent.

This crisis of violence and hatred crisis demands our organized voice to demand that it stop. Only unity in action can transform the social and economic realities of transgender communities. We need to turn around the high rates of unemployment, poverty and violence which endanger the lives of trans and gender non-conforming people, particularly trans women of color. The tide is turning in our favor. Millions of new supporters around the country are looking for ways to support this new momentum in the struggle for equality.

Stand up! Speak out!

On Saturday, July 11, come gather at Vermont/ Sunset Metro plaza at 2pm to bravely speak out as we continue to build a movement that breaks through the systemic barriers denying trans and gender non-conforming people the rights they deserve and demand: