Transcript of RT interview with Brian Becker on Ukraine upheaval 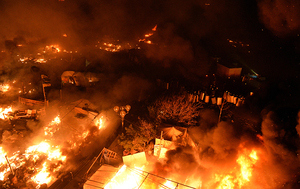 The epicenter of right-wing rioting in Ukraine, Feb. 18

RT: Some are saying that extremists among the demonstrators are now emboldened to be violent after such strong support from abroad. Are the EU and the US really to blame for this?

Brian Becker: I think there's an inter-tangling here, of course. The internal struggle within Ukraine is complex, it is complicated, it has its own dynamic. And there is a very far-right fascist and semi-fascist force that is opting for violence and really armed struggle to overthrow the government, as a tactic to integrate Ukraine into the EU and into the Western powers. But behind that, the wind in their sails right now - and we can see it from the upsurge of violence - does come from the most important military powers in the Western world: the United States and NATO and the EU together are using their combined forces to signal to these demonstrators that 'We are with you.' And of course that emboldens them. [US Secretary of State] John Kerry and the EU, NATO leadership, and the Obama administration are neck deep now in a plan to carry out regime change in this extremely important part of Europe, trying to integrate a former Soviet republic into the EU and, of course, into NATO ultimately.

RT: But Brussels and Washington don't want to see people dying over this, do they?

BB: I think the United States government is involved in invasion after invasion, occupation of countries, bombing of countries. I don't know if the loss of human life is really the ultimate criteria. I really don't believe so. I think the United States government is playing another dirty game. They're trying to do what they've been doing for the last 20 years, which is to incorporate all of the former socialist countries in the eastern and central European bloc - those that were aligned with the Soviet Union - into an American-Western-NATO sphere of influence. And Ukraine is a big prize, with a very big military and it is right on Russia's border. It's part of a new Cold War against Russia, as well.

RT: There's even been talk of sanctions against Kiev. Why do Western officials insist on blaming the government for the violence?

BB: Can you imagine in the United States - where police forces arrested 7,000 people in the Occupy movement, which was a completely peaceful movement that [the US] broke because they feared any rising discontent against inequality - they're now telling this sovereign government of Ukraine, confronted with armed mobs and people carrying Molotov cocktails and guns, that if they use police force, that it is a violation of [protesters'] right of dissent. The hypocrisy here is dripping. I mean, the United States government has no right - when they foment opposition, arm opposition groups from Syria to Libya, and now in Ukraine - and then say when a government responds to it, 'See, you're violating people's constitutional rights or free speech rights.' That's just a propaganda game.

RT: Is there really a serious riff forming between Russia and the EU about this?

BB: The EU triggered this whole protest movement. They signaled their pro-European forces inside Ukraine when they gave an ultimatum to the Ukrainian government back in November. 'Which side are you on? Are you going to maintain your economic and political and diplomatic ties with Russia, or are you going to come into the EU?' And under the condition of that ultimatum, these protests began and great pressure was brought to bear on the Ukrainian government. This is a destabilization campaign. It's a coordinated economic, political, and ultimately military destabilization campaign against an important country, a country that's historically linked first to the Soviet Union and to Russia. They want to bring it over into the camp of the American government, which has expansionist designs. They want to encircle Russia in order to conquer what was formally an independent part of the world. And subjugate it, dominate it, and of course the Russians perceive it as a threat. This was an EU-provoked crisis, not a Russian-provoked crisis.

RT: What about people in Ukraine who do want to see a change in the government? They're fed up with corruption and a poor standard of living.

BB: Indeed, there are many different forces that are struggling against the Yanukovich government. There are some to the right, some to the left. It's very complex. Many have legitimate grievances. There's high unemployment. The breakup of the Soviet Union led to an evisceration of the people in Ukraine. That's not the issue, though, for the United States and the EU countries, which are using valid grievances against the Ukrainian government for a larger, geostrategic purpose, which is to integrate Ukraine into the Western bloc.

RT: Ukraine is divided by east and west, loyalties to Russia and the EU. Are we seeing a country split in half?

BB: Yes, there's eastern Ukraine with historic ties to Russia, and the west is more oriented towards the EU. But there's also a class divide; there's rich and poor. And of course the upper classes, those who have been courted by Western powers, are being told, 'Look, if you come with us, you will become very, very rich.' They have nothing in common with the Ukrainians, who are poor and who have been suffering for the last 20 years. There's a class divide in addition to a geographic divide.

RT: There's talk of a civil war. If so, should there be a neutral moderator? Who would it be?

BB: What needs to happen is the EU countries and, I would say as an American, we have to tell our government, 'stop trying to foment civil disruption Ukraine,’ maybe possibly fomenting civil war as they did in the case of Syria, for instance, or Libya. 'Stop doing that.' The Ukrainian people, and only they, should be the determiners of their destiny. They should have real self-determination, which means the Western powers need to get out and leave them alone.