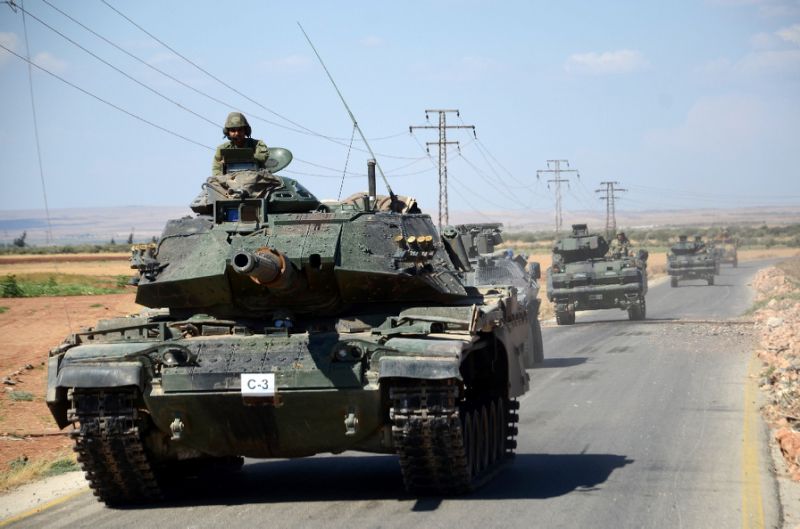 It is now more than a week since the start of the Turkish military assault targeting Kurdish forces in the Afrin region of northern Syria. Following heavy artillery strikes launched on January 17, the operation initiated by the ruling, right-wing Justice and Development Party (AKP) of Turkey quickly escalated into an all-out military incursion into Syria with ground troops from both the Turkish armed forces and the so-called Free Syrian Army (FSA).

Shortly after the start of the attack by Turkey, the Syrian government issued a statement strongly condemning the actions of the AKP government, saying they represent a violation of Syria’s sovereignty.

The Afrin region is under the control of the Democratic Union Party (PYD) and its militia, the People’s Protection Units (YPG). For the last several years, the YPG has received major military assistance from the United States. However, to the great dismay of the Turkish government, the YPG is linked to the Kurdistan Workers’ Party (PKK), which has waged a 30-year-long armed struggle for Kurdish independence or autonomy in southeast Turkey.

The timing of the attack by Turkey in Afrin seems to be directly connected to an earlier revelation that the United States intended to set up a 30,000-strong border security force, to be made up primarily of YPG forces. The Turkish government was furious. They said in a statement, “It is regrettable that a state [the United States], which is part of NATO and our ally in bilateral relations, declares the terrorists [the YPG] as its partner and provides them with weapons, without any concern for our safety.”

The Russian government also pointed to the U.S. announcement of the Kurdish led security border force as the reason behind the Turkish military action in Afrin. In a statement on January 20, Russian Foreign Minister Sergei Lavrov said, “Washington has actively encouraged and continues to encourage separatist sentiment among Kurds,” adding “This is either a lack of understanding of the situation or an absolutely conscious provocation.”

It is important to note that the AKP regime could not have acted without Russia’s approval because Russia controls the air space over Afrin. Russia intervened in Syria at the request of the Syrian government, its longstanding ally, in 2015 and helped turn the tide of the war against the opposition. While Russia is not an imperialist power like the United States, its foreign policy is motivated by nationalist considerations, not international solidarity.

U.S. and Turkish military intervention in Syria: a blatant violation of international law

Flying in the face of an earlier U.S. statement on January 22 that “urged Turkey to exercise restraint in its military actions and rhetoric; ensure that its operations are limited in scope and duration,” Turkish president Recep Tayyip Erdoğan announced on January 26 that the military operation would extend east all the way to the Iraqi border, including Manbij where some U.S. troops are stationed. While the chances of a military confrontation between the United States and Turkey, both NATO members, are slim, the fact that it is being discussed at all highlights the extreme low point in relations between U.S. imperialism and the Erdoğan-led Turkish government.

Under the pretext of fighting terror, the United States has deployed more than 2,000 troops in Syria as well as established numerous military bases, mostly in areas under Kurdish control. On January 17, U.S. Secretary of State Tillerson announced that these U.S. troops will remain indefinitely in Syria.

At a time when ISIS and all other reactionary terror groups have more or less been defeated, it is clear that the decision by U.S. imperialism to keep these troops in Syria has nothing to do with fighting terror and everything to do with an illegal occupation aiming to partition Syria, now that their 7-year-long regime change operation has been largely defeated by the Syrian government and its allies. Unlike the military interventions of Russia and Iran, which were formally requested by the sovereign Syrian government, the United States and Turkey’s presence in Syria are illegitimate and an outright violation of international law.

While at odds at the moment, it is important to remember that both U.S. imperialism and the AKP have been partners in crime in the carnage and bloodbath in Syria. Along with reactionary Gulf monarchies such as Saudi Arabia and Qatar, they supported reactionary terror groups including ISIS, al-Qaeda and others in their joint effort to overthrow the Syrian government. It is the height of hypocrisy that two main sources of terror in Syria, namely the U.S. and Turkish governments, continue to justify their actions under the pretext of “fighting terror.”

A showcase of U.S. imperialist treachery

The U.S. government has absolutely no concern for the well being of the Kurdish people and in the past has not hesitated to break their alliance with various Kurdish forces when it suited their imperial interests.

The AKP’s current military move in Syria forces the United States into a corner — forced to choose between Turkey and the YPG. Turkey is a more valuable partner when it comes to weakening and overthrowing the Syrian government itself, while the elements of the Pentagon and State Department who are most committed to the strategy of partitioning Syria see the YPG as a more important ally.

Betrayal of its Kurdish allies by U.S. imperialism is certainly no small possibility. A Pentagon official speaking to Voice of America about the Syrian Democratic Forces (mainly made up of YPG militia) said, “We don’t see the YPG as currently the majority element [in] SDF, we have a much more populous and much more capable Arab force that we can use.” The YPG is in fact the majority element of SDF, but this statement underplaying their significance indicates that the Pentagon may be ready to leave them behind.

Sensing this pending betrayal and at odds with their earlier position in November 2017, which welcomed the long term presence of the U.S. military in Syria, the PYD authorities in Afrin issued a statement on January 25 formally asking for the help of the Syrian government forces:

“We affirm that we will continue to defend Afrin region in the face of the outraged foreign attacks and we will confront the attempts of the Turkish occupation of Afrin. We call upon the Syrian state to carry out its sovereign duties towards Afrin and protect its borders with Turkey from attacks by the Turkish occupier, and to deploy its Syrian armed forces to secure the borders of the Afrin region.”

What does AKP hope to gain from Afrin operation?

At a time when the ruling AKP government is facing domestic and international problems, the military operation in Afrin serves AKP’s interests on a number of fronts.

On the domestic front, as the workers and poor face more and more economic hardships, unemployment of over 10 percent, inflation on the rise and an economy heading towards a deep crisis, the AKP had slowly been losing the popular support it once had. The nationalist, anti-Kurdish rhetoric whipped up by the corporate media in unconditional support of AKP and the the Afrin operation, portraying Erdoğan as the ‘powerful’ leader ‘defying global powers,’ has  helped Erdoğan re-consolidate his mass base and deflect some of the growing frustration by the masses facing severe economic problems.

It is also providing him with a stronger hand in escalating the repression of the Kurdish opposition movement. He stated, “Whoever takes to the streets on the call of [pro-Kurdish] HDP, [Kurdistan Communities Union], and PKK should know that our security forces will keep a tight rein on them and they will pay a heavy price.”

It is not only the Kurdish movement but any progressive force that dares to speak against this war that is facing extreme repression at the hands of the AKP. There are reports of people being detained based on social media posts that oppose the military operation in Afrin.

Other than the Kurdish opposition HDP (Peoples’ Democracy Party), all the parties represented in parliament including the social democrat CHP (Republican People’s Party), the fascist MHP (Nationalist Movement Party) and the new center-right IYI (Good) Party came out in support of the military operation in Afrin.

Speaking to the media on January 20, CHP leader Kemal Kılıçdaroğlu said, “We are totally confident about our brave army and give full support to the operation. What we care about is the security of our borders. No country would want a terrorist organization on their border.”

With the general elections approaching in 2019, there were talks about a possible CHP-HDP coalition which would pose a serious threat to continued AKP rule. Given the CHP’s position in support of the attack on Afrin, the AKP can now rest easy as a CHP-HDP coalition appears out of the question.

It is also no surprise that the capitalist class lent full support to the invasion of Afrin. In a written statement released on January 21, the president of the Turkish Business and Industry Association (TÜSİAD) Erol Bilecik said: “Our hearts are with the Turkish Armed Forces in our rightful fight against terror elements.”

Erdoğan was on the verge of a major setback as Syrian government forces launched an offensive in December 2017 to liberate Idlib, the largest remaining bastion of ultra-reactionary, religious forces remaining in Syria. The main group under attack in Idlib is the AKP-backed Tahrir al-Sham (formerly known as al-Nusra front, the branch of al-Qaeda in Syria).

The Afrin operation gave the AKP a chance to get back in the game in Syria, redeploy some of the remaining jihadist forces from Idlib under the banner of the “moderate” FSA and use them against what it considers a mortal enemy — the YPG. It is also certain that the AKP will use Afrin to strengthen its role within the broader U.S.-led regime change project in Syria.