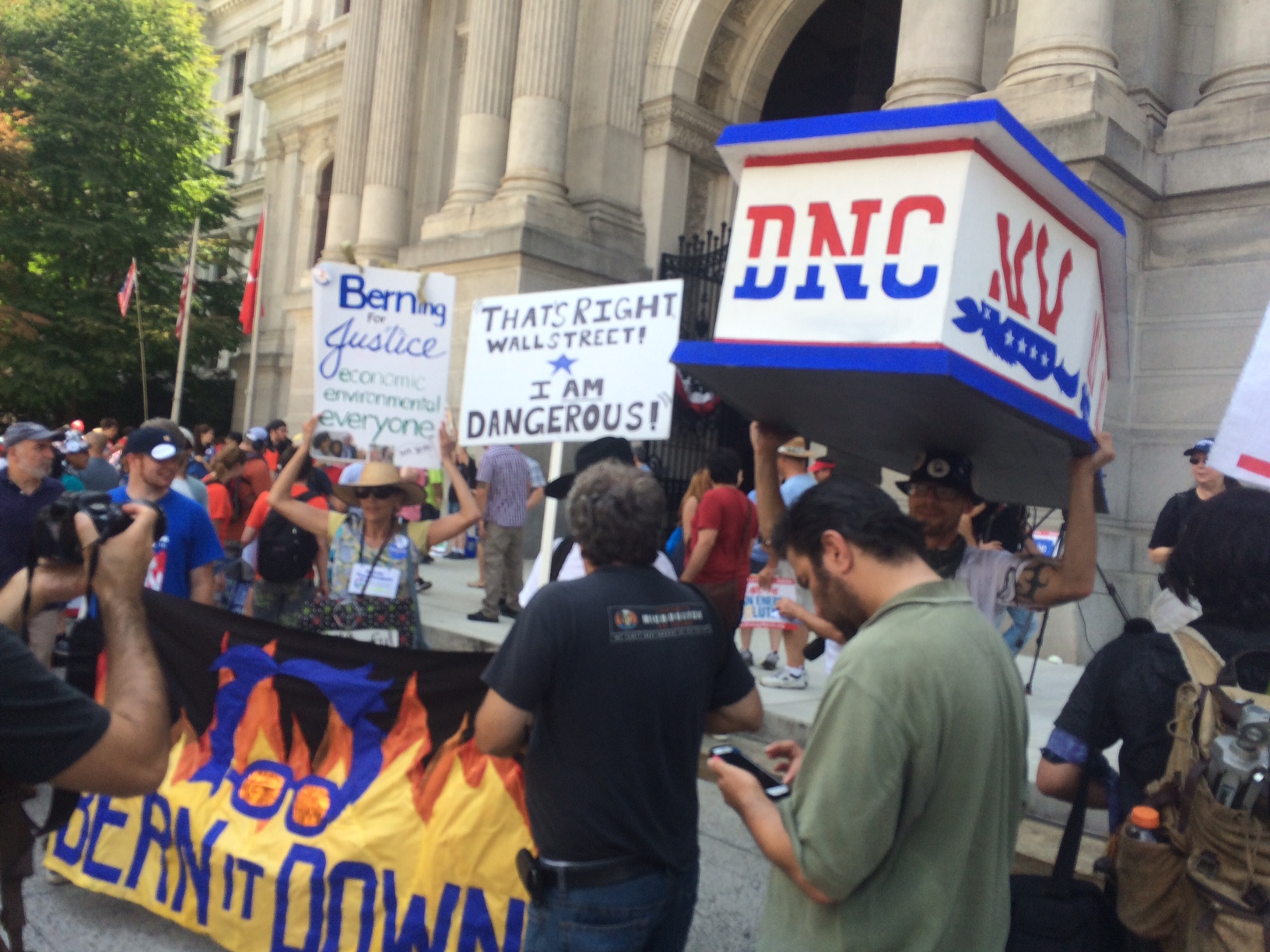 Anger and tension permeated the first day of the Democratic National Convention as chants of “DemExit” rose from outside the conference walls and chants of “Bernie” and livid boos at Hillary’s name rose from within. Late in the night, Bernie supporters chanted down Elizabeth Warren with “boos.” Senator Bernie Sanders texted to his delegates, “I ask you as a personal courtesy to me to not engage in any kind of protest on the floor.”

Despite the texts, Sanders supporters continued to chant down Hillary and turn against his calls for party unity. Outside, militant members of the “Bernie or Bust” crowd formed in a protest of thousands calling for the exit of the Democratic Party and to lock up Hillary Clinton for her recent email scandal. As the day unfolded, it became more and more clear that many of Sanders’ supporters are pushing beyond the limits of Sanders campaign itself. Young and energized new activists took to the streets standing in unity with democratic party loyalists who have been an established part of the rank and file in the party for years and together they loudly proclaimed, “NEVER Hillary.”

Tiara McClure, a young Sanders supporter who had been a lifelong democrat spoke about how, “I felt betrayed by the Democratic party. The party is talking about unity, but after the email scandal I wonder, how could we ever have unity with a criminal?”

The call for the exit from the Democratic Party is historic. Sanders supporters are organizing and protesting the two Wall Street parties and are moving beyond just electoral politics. Supporters throughout the demonstration were wearing “Hands up Don’t Shoot” and “Black Lives Matter” buttons. The march switched from chants against Hillary to chant for Black Lives Matter.

Sanders has lost control of his supporters and whether he approves or not, his supporters are moving forward with his political revolution. Chants of “Who’s revolution, our revolution!” filled the skies. The people are the ones who made history and organized a campaign for Sanders from the ground up. It is clear that the people are continuing the fight for Sanders’ program – and maybe much more – with or without him or the Democratic Party.

Sanders supporters are making the connections and many are standing strong and bracing themselves for the fight ahead. Cady, a Sanders supporter who is new to politics from Queens, New York proclaimed, “I always felt that I never had a voice in politics. This time around it just feels different that so many people are at a point that they are tired of the same-old same-old, and they are coming out and we see so many young people out here, so many people out here of different races, and we are all here for one reason – for equality and justice. To say enough is enough. Even though we know that Hillary is going to be the nominee, we’re still not okay and we’ve still got a long way to go. By being out here we’re letting everyone know that we still have a lot of work to do until there is equality for everyone. We will keep fighting!”