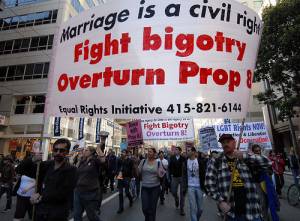 The movement for equality scored two major victories on June 26, as different 5-4 majorities in the U.S. Supreme Court struck down the Defense of Marriage Act as unconstitutional and let stand the original Federal District Court decision that struck down California’s Proposition 8.

Justice Kennedy wrote the majority opinion in the DOMA case, U.S. v. Windsor, and announced his decision from the bench. He spoke eloquently about the nature of DOMA in attempting to undermine the dignity of same-sex couples, concluding that this was an unconstitutional law that served no legitimate purpose. His description of the discriminatory effect of the law was so moving that many courtroom viewers sniffled and choked back tears, including even a sizable portion of people sitting in the section of the room reserved for members of the Supreme Court bar, who are normally very careful about decorum.

This ruling reflects a judicial variation on the change in attitudes and understanding that the political struggle, inside and outside courtrooms around the country, has won very recently. Anti-equality forces had success in early stages by asking for a simple show of hands on “who wants gay marriage?” as evident in the early “Let the People Vote Coalition,” funded by the National Organization for Marriage.

But as the debate moved beyond the initial, knee-jerk response to the idea of same-sex marriage, people began to see this as an issue of equality and denial of the rights and dignity of others. The last election cycle showed that people in many states (including ones that formerly voted against marriage equality) realized that there was no reason, other than bare bigotry, to deny marriage rights. Today, the majority of the Supreme Court recognized this truth, and affirmed that our Constitutional principles of due process and equal protection of the laws prohibit such baseless discrimination.

In his dissent and statement from the bench, Justice Scalia took issue with this reasoning and lamented that the issue of equality was not left for the whim of the majority. He adopts an attitude we have seen among equality opponents recently, expressing offense at the conclusion that their side has no legitimate reasons and therefore must be acting based on prejudice. He wrote, “It is one thing for a society to elect change; it is another for a court of law to impose change by adjudging those who oppose it hostes humani generis, enemies of the human race.” But however opponents of equality may wish to be characterized, the realities of the policy and a careful analysis of the reasons put forward for discrimination paint a clear picture, and today they were unable to dismiss the legal consequences of that inescapable conclusion.

That careful analysis of what the discrimination really means and whether any arguments for maintaining it can possibly be legitimate is exactly what Judge Vaughn Walker did in the first federal court trial that challenged Prop 8. His carefully worded, 138-page opinion was reinstated today by virtue of the Supreme Court’s decision to decline to reach the merits in that appeal, Hollingsworth v. Perry. For this reason, equality advocates can rejoice at this decision, too, although the lack of a clear, nationally relevant declaration on the right to marry is, of course, disappointing.

The opinions in this case defied traditional groupings, with Justices Ginsburg, Breyer and Kagan joining Scalia and Chief Justice Roberts to form a majority holding that the “Prop. 8 proponents” (those who sponsored the ballot measure) lacked standing. The standing doctrine requires that the parties to a case have a personalized injury.

At the time of the initial federal court action, same-sex couples wanted marriage licenses and California was refusing to issue them, so there was no question about standing. But once California lost, it accepted that ruling and did not appeal, and was prepared to issue licenses. The Prop. 8 proponents then sought to bring the appeal in place of the state, and the California Supreme Court said they had standing under California law. But standing in federal court is a question of federal law rather than state law, and today the Supreme Court said that initiative proponents cannot come into federal court in place of the state.

The effect of this ruling is reinstatement of the decision of the District Court in California. That court had required opponents of marriage equality to put forth their reasons and then to present expert testimony and other evidence in support of their claims. They had claimed that marriage equality could be harmful to children and would encroach upon the rights of “traditional families.” But when put to the test, these claims had no support, and the ruling carefully outlined all their logical and factual failings. That ruling had been supplanted by a narrower and more limited appellate court ruling, but it is now reinstated because of today’s decision that the appeal lacked standing.

Many advocates had hoped the Prop 8 case would result in a strong ruling on the right to equal marriage recognition, which would have nationwide implications. Instead, Prop 8 is invalidated and California has marriage equality, but nationwide equality requires further legal and political action. The prospects are good legally, with a strong foundation in Judge Walker’s decision and in today’s DOMA decision.

Justice Scalia, in his dissent in the DOMA case, said the rationale of the DOMA ruling “arms well every challenger to a state law restricting marriage.” Here, we agree. The movement for equality is motivated not only by one complete and one unfinished win on marriage equality today but by the need to fight yesterday’s dangerous assault on the Voting Rights Act; reminders, even as we rejoice, of the importance of broad and constant struggle for the rights of all people.