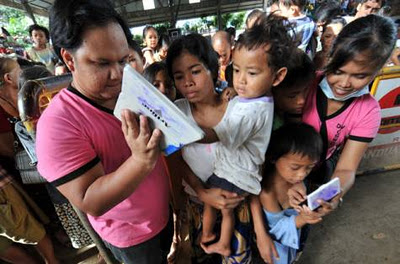 The following is a statement from Damayan Migrant Workers Association

In the wake of Typhoon Haiyan/Yolanda in the Philippines, what is sure to be a long and painful recovery has begun. It was the strongest typhoon ever to make landfall, and the 25th typhoon to hit the Philippines this year. Haiyan caused untold damage to the provinces of Leyte, Samar, Panay, Bohol, Negros and Palawan, affecting more than 2 million people and killing an estimated 10,000 people.

Filipinos around the world have mobilized to assist the people of our homeland, and have been moved by the outpouring of solidarity from non-Filipino people. We in the Filipino-American community are organizing relief drives and conducting people-to-people aid to help our devastated compatriots. With the Sagip-Tulong sa Pilipinas (STP) Relief Campaign, Damayan Migrant Workers Association and allies echo the appeals for generosity and sacrifice to send aid directly to pro-people organizations in the Philippines.

At such a moment, it is also important to put this catastrophe into a political and social context. Resource allocation and planning can play a decisive role in mitigating the impact of natural disasters and dealing with the aftermath. As the people of the Philippines struggle to locate their loved ones and survive the shortages of food, shelter and other basic necessities, there is a well-founded concern that the Philippine government’s relief effort will primarily serve wealthy elites and corporate interests rather than the people who are suffering.

The Philippines needs aid, not militarization

Immediately following the typhoon, international news began to spread of “anarchy” and “looting.” On Nov. 10, just one day after the typhoon left the archipelago, Philippine President Benigno Aquino III said that he was considering declaring a state of emergency or martial law in the hard-hit city of Tacloban, Leyte. As of this writing, hundreds of Filipino police and soldiers have been deployed to the area in the name of security.

The situation obviously requires emergency action. But these stringent military measures are geared to protect private property and goods rather than provide for people’s needs. The call for martial law-style “order” is an appeal to those with wealth; for the rest of the population, it means the suspension of civil liberties, including due process.

On the heels of President Aquino’s statement, U.S. military search-and-rescue helicopters, surveillance planes and Marines raced toward the central Philippines. The claim is that this military push to the area will help survey the devastation and assist survivors.

Again, the larger historical context of these actions must be emphasized. The U.S. military in the Philippines has been the instrument for the complete subservience of the Philippines to U.S. political and economic interests. It has meant an increase in violence against women at the hands of U.S. service members.

The U.S. government has long wrapped its colonial and neocolonial endeavors in the Philippines in the language of humanitarianism and paternalism towards its “little brown brothers.” With President Obama’s strategic “Asian Pivot,” which has a military and economic dimension, the Philippines figures prominently. Washington plans to once again use the Philippines as a key military base. While the Philippines will welcome any and all humanitarian aid, progressives must oppose U.S. military aid.

The ultimate cause of the devastation is largely hidden from the news stories about this typhoon and other natural disasters: the unnatural disasters of climate crisis, large-scale commercial logging, mining and deforestation of the Philippines.

Climate change is one of the most urgent issues of the world today, bringing about rising sea levels and sea temperatures that lead to super typhoons such as Yolanda. Greenhouse gas emissions are largely responsible, mostly emitted by rich and so-called developed countries like the U.S. Transnational corporations, with the blessings of their governments, have been at the helm of destructive projects that have likewise contributed to the crisis: they have polluted and plundered communities, and built factories, oil refineries and coal power plants contaminating our air and water. These countries have further pushed for policies allowing industries to irresponsibly extract the earth’s minerals. The U.S., in particular, continues to wage environmentally destructive wars. Meanwhile, these same countries are ignoring or even denying the existence of climate change and the climate crisis.

In the Philippines, large-scale commercial logging and deforestation, run by big political families, have largely escaped regulation despite an Executive Order by President Aquino declaring a moratorium on logging in natural forests and creating an Anti-Illegal Logging Task Force. Recently, a commercial logging permit was given to the San Jose Timber Co, owned by Senator Juan Ponce Enrile, to cut trees in the 95,770 hectares of forest lands in Samar Island, one of the hardest-hit provinces during Typhoon Yolanda.

Beset with corruption, government agencies are responsible in the processing and approval of logging operations, while some officials are actually active parties in the destruction of forests. Logging companies with permits were able to reforest only 97,741 hectares since 1976 – an insignificant number compared to the millions of hectares of natural forests that were destroyed. Wiping out the archipelago’s natural defenses, deforestation has left the people vulnerable to storms, exacerbating the calamity.

A True Recovery for the People

Given the political and economic context in which aid takes place in the Philippines, and indeed globally, it is essential that aid from abroad is channeled to genuine people’s organizations in affected communities, and that these organizations are not beholden to the same corporate interests that caused or exacerbated the devastation to begin with. And most importantly, aid should seek to break with, rather than to contribute to the same historic problems of neocolonialism, racism and chauvinism that continue to sink the Philippines further into poverty.

In addition to the Sagip-Tulong sa Pilipinas (ST) Relief Campaign, Damayan Migrant Workers Association signs on the calls of Alliance-Philippines for the following:

1. Stop deforestation and destructive extractive mining all over the Philippines.

2. Relocate all low-lying cities and squatters along the coastal areas and implement good and proper urban planning. Provide decent and proper housing to the people who will be relocated.

3. US military out of the Philippines – aid should not come at the expense of Philippine sovereignty.

For information or to donate to STP, click here. One hundred percent of donations will go towards people’s organizations in the affected areas.