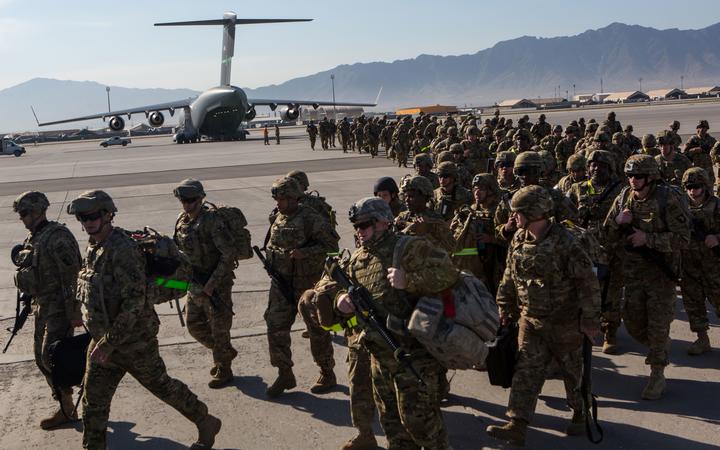 The following was originally published by Liberation News.

The unopposed entrance of Taliban forces into Kabul marks the bitter conclusion of a 20-year long military adventure by U.S. imperialism that senselessly inflicted death and suffering on an enormous scale. The fact that the U.S.-backed Afghan government surrendered without a fight is the clearest indication that it was nothing more than an extension of U.S. imperialist power. The stark reality showed itself: either the U.S. imperialist occupation that began 20 years ago would be sustained literally forever, or this government would collapse upon the exit of U.S. military forces. The Taliban coming to power in the mid-1990s was the consequence of the CIA war against the socialist government of Afghanistan that had come to power in 1978 during the Saur Revolution. The U.S. was perfectly willing to do business with the Taliban prior to September 11 in spite of their odious policies including their prohibition on the education of girls. The hope and promise of the earlier socialist period was crushed by U.S. intervention and the later collapse of the Soviet Union. Since then, the people of Afghanistan have lived under one reactionary government after another.

The complete and almost instantaneous military and political collapse of the Afghan government has led to a situation where the Taliban is presiding over the panicked evacuation of its opponents from inside the capital city. Since the U.S. invasion of Afghanistan in October 2001, hundreds of thousands of Afghans died, millions were forced to flee their homes, tens of thousands of working class enlisted soldiers from the United States were killed or injured — and in the end the political situation in the country is returning to a situation where the Taliban dominates the country.

The U.S./NATO invasion of Afghanistan began October 7, 2001 in retaliation for the September 11 terrorist attacks against the World Trade Center and the Pentagon. The Bush administration refused the Taliban government’s offer to hand over Osama bin Laden for trial in a Muslim country if the United States would present evidence showing that al-Qaeda was responsible for the attack. Instead, Bush declared “no negotiations with terrorists” and launched the invasion. The Bush administration used the September 11 attack as a pretext to launch a sweeping assault against Iraq and other Middle Eastern governments. The invasion of Afghanistan was simply conceived of as a box-checking endeavour by the neo-conservative government to wage a new round of aggression under the banner of the “war on terror”. This imperialist wave of aggression toppled the government in Iraq and Libya and hoped to topple the governments in Syria and Iran as well. It has been a disaster for the people of the Middle East and South Asia.

The pace of the Taliban’s advance was stunning. In just nine days, the group took over every major city in the country and then marched into Kabul without firing a shot. This was possible because the Afghan government’s forces in most cases put up virtually no resistance. Where fighting did occur, it frequently was carried out by elite special forces or local militias. When the moment of truth arrived and it became clear that the U.S. military really was leaving the country, the Afghan National Army did not fight.

After the 2001 invasion, the United States spent hundreds of billions of dollars creating and supporting the Afghan government’s military. But this military served a government that had no political legitimacy. Its source of authority was the U.S.-led foreign occupation of the country, corruption was rampant and it failed to develop an appreciable base of support among the country’s people. It was clear that the government would not be able to hold out for long against the Taliban, so rather than fight and die to prolong the inevitable the security forces mostly chose to step aside.

The Biden administration chose not to carry out a military escalation, like a dramatic escalation of the air war, that could have halted the Taliban advance. The prevailing view appears to have been that the war was unwinnable and it would be best to abandon the government they installed, get the withdrawal over with now and focus on bigger issues for U.S. empire. But certainly the Biden administration was hoping to carry out an orderly withdrawal on its own terms. It is now suffering the humiliation of having to directly hand over control of the country to the Taliban, a major blow to the image of U.S. military might around the world. This could have long lasting implications for Biden’s military and foreign policy going forward.

Background to the 2001 invasion

The role of the United States in Afghanistan has always been insidious. The Taliban itself came out of the counter-revolutionary insurgency organized and bankrolled by the CIA in the 1970s and 1980s that sought to overthrow the country’s socialist government. This socialist government — the Democratic Republic of Afghanistan — was committed to the empowerment of workers and farmers, full equality for women in all areas of society, the provision of free social services like education and healthcare, and other progressive goals. The U.S. government backed far right religious armed groups to wage a deadly insurgency against the government and their Soviet allies.

One faction of those fighters — the Taliban — won out in the aftermath of the fall of the socialist Afghan government and established themselves as the country’s rulers and enforced an oppressive political system based on reactionary theocratic principles. Any claims by U.S. officials to be concerned about the fate of women’s rights or democracy or religious freedom in Afghanistan is the worst kind of hypocrisy.

The U.S. politicians and generals responsible for organizing this senseless two decade long war should be brought to justice. They are ultimately responsible for the enormous loss of life that ripped apart Afghan society. The rationale for the war was nonsense — there were no Afghans on board the planes that struck the Twin Towers on September 11, and the Taliban was willing to negotiate the handover of Osama bin Laden. The U.S. military and political establishment could have ended the bloodshed at any time and the outcome would have been the same. Instead they claimed that year after year it was essential that the occupation be prolonged. They should be held accountable for the crime of initiating a war of aggression.