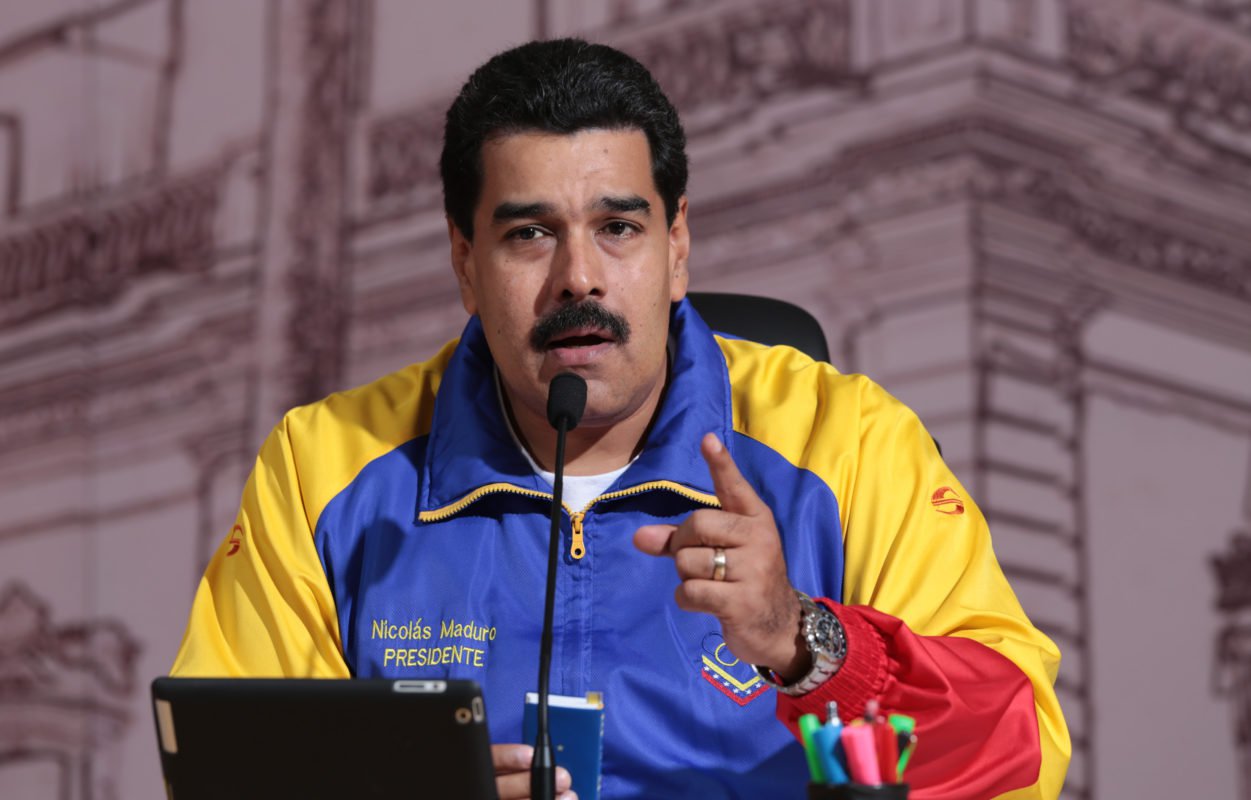 More than 500,000 Venezuelan soldiers and civilian militia members took part in the largest military exercises of the country’s history last weekend to prepare against growing threats from U.S. and other imperialist forces.

Venezuela’s revolutionary government is at a crossroads as it struggles to overcome economic crisis and aggression by Washington, and the opposition is intent on overthrowing the government. The drastic fall in world oil prices, severe drought, and a campaign of subversion by the country’s capitalist class have badly damaged the country’s economy.

Venezuelan President Nicolás Maduro spoke May 20 in an international press conference convened in Caracas and linked online with dozens of reporters worldwide.

“I can say today that we are victims of the worst media, political and diplomatic aggression that our country has lived through in the past ten years,” he declared.

The Bolivarian government of Venezuela has never enjoyed a moment of peace ever since revolutionary leader Hugo Chávez became president in 1999 and made clear his aim to build a new society empowering the workers and poor people.

The U.S. government helped plot a coup against Chávez in April 2002 and an oil industry shutdown that almost brought the government down in late 2002. Since then, Washington has continually financed and encouraged opposition organizations in coordinated violence and destabilizing schemes.

But new developments point to growing danger for the government of Maduro and the Venezuelan people who benefit from the extensive social programs developed by the revolutionary government.

Henry Ramos Allup, opposition president of the National Assembly,  met privately with the Organization of American States general secretary, Luis Almagro, who is pro-U.S. and openly hostile to Maduro’s government.

The OAS, headquartered in Washington, D.C., was formed under the auspices of U.S. imperialism in 1948. Its dominant hand has shaped policies and actions in the hemisphere for decades to further Washington and Wall Street’s interests. It took no action when the CIA organized a coup against Guatemalan President Jacobo Arbenz in 1954, nor when the U.S. invaded Dominican Republic in 1965, Grenada in 1983, and Panama in 1989. It said nothing when Colombia raided and bombed inside Ecuador’s borders in 2008.

But under U.S. direction, the OAS did act to expel Cuba in January 1962—because of its socialist revolution. It was a prelude to the Pentagon’s secret plan to massively bomb Cuba through Operation Mongoose. The plot was thwarted when the Soviet Union came to Cuba’s aid with tactical nuclear weapons in a flash-point conflict known as the Cuban Missile Crisis.

Cuba once referred to the OAS as the “U.S. Ministry of Colonies.”

Venezuela’s pro-imperialist opposition is pushing for foreign—U.S.—intervention because their ambitious plans to overturn the president  and Bolivarian governmental institutions have been blocked up to now. An amnesty law that would have exonerated all those engaged in “conspiracy and terrorism … mutiny, civil rebellion, treason, military rebellion” and other crimes over the last 17 years, was declared unconstitutional in a unanimous Supreme Court ruling.

This ambitious right-wing National Assembly bloc also tried to privatize the more than 1.2 million homes that the government has built and given to people for free for life, by trying to implement a law that would turn the current Deed of Use into a Property Deed. By giving individual title, the elite now dominating the National Assembly is trying to bribe and entice the population with the idea that they could then sell their house for money or use as an investment.

Overturning the socialist-oriented, profit-free housing mission into real estate would only lead to homelessness.

Again, the Supreme Court ruled that the attempted law violated the Constitution’s guarantee of housing.

There are more counterrevolutionary plots by the opposition legislators, but their biggest objective is to try to seize the presidency through means of a recall referendum. At the same time, constant in their tactical plans is the use of violence and a claim of chaos that would give a pretext for outside intervention and/or violent overthrow from within.

The fight over recall

Timing is a critical factor in the battle over the recall referendum that the right-wing opposition is pushing for to oust President Maduro.

Under the Bolivarian Constitution, if a president loses a recall vote within the first four years in office, a new presidential election must be held within 30 days. If the referendum takes place in 2017 and Maduro were to be recalled, Vice-President Aristóbulo Istúriz would finish out Maduro’s term until 2019.

Istúriz is a longtime leader in the Venezuelan United Socialist Party (PSUV).

On April 26, the opposition submitted signatures of 1 percent of voters—197, 978—the first step required for a vote to first validate the sponsoring organization, the opposition’s Democratic Unity Roundtable, MUD. If enough signatures are verified, then signatures of 20 percent of the electorate must be collected. If they are valid, then a vote is scheduled. The MUD is demanding that the referendum be held this year.

The National Electoral Council (CNE) has declared that the process makes it virtually impossible to hold a referendum before January of 2017. Referring to violent protests on May 18 organized by the opposition, CNE Vice-President Sandra Oblitas told the press, “The CNE does not accept pressure of one or another, of no one … it has its procedures that are clearly established.”

Opposition leader Henrique Capriles convened a May 24 protest, but the media reported only 500 people showed up for his downtown Caracas rally.

OAS head Luis Almagro is aggressively supporting  the Venezuelan opposition’s demand for a recall referendum this year. In a highly accusatory letter to Maduro, he said, “To deny the people that vote … would make you just another petty dictator, like so many this hemisphere has had.” An astounding statement, considering that U.S. imperialism is notorious for its role in coups, invasions and military dictatorships throughout the continent.

In a May 26 meeting of the Inter-American Dialogue, a Washington-based think tank, Bernardo Alvarez, Venezuela’s ambassador to the OAS, denounced the campaign of distortion against his government. He accused Almagro of acting unilaterally without the support of member states. Michael Shifter, head of the organization, commented on Almagro’s action, expressing “… puzzlement in the way he’s behaving.”

In recent days, U.S. and Venezuelan corporate media are portraying a “failed state” on the verge of collapse and facing a humanitarian crisis. The Washington Post, The New York Times, Spanish media ABC and El País are portraying a country that can only be “saved” by outside interference.

But his government is quickly escalating its action, setting the stage for further interference. Under the claim of a “humanitarian crisis,” Rajoy convened a meeting of Spain’s National Security Council today, claiming concern for the 200,000 people of Spanish nationality in Venezuela, and Spanish corporations invested there.

President Maduro on May 26 warned of Spain’s intention. “They want to create a crisis to justify an invasion of Venezuela by NATO and the United State of America.”

In 1999 Spain played a key role in the lead-up and carrying out of NATO’s 78-day bombardment of Yugoslavia, under the pretext of resolving the “humanitarian crisis,” that President Bill Clinton had invoked as pretense for the bombing. The NATO secretary-general during the bombing was Javier Solana of Spain. Spain’s ambassador to Venezuela was ordered home this month.

Ironically, while Spain denounces the Maduro government for Venezuela’s economic crisis, the youth of Spain suffer from more than 50 percent unemployment, and the gap between rich and poor in that country has increased dramatically. Spain’s official unemployment is 21 percent while Venezuela’s is 6 percent.

The aggression against Venezuela is a component of U.S. imperialism’s strategy of overturning revolutionary and left-leaning governments throughout Latin America. The trumped-up impeachment of Brazil’s President Dilma Rousseff  and the indictment of Argentinian ex-President Cristina Fernández are not coincidences but instead part of a concerted offensive.