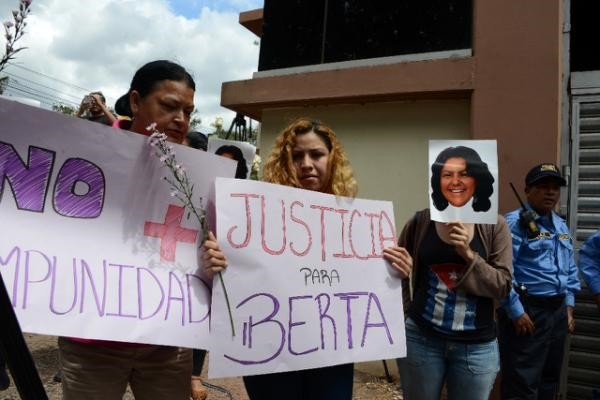 It is highly likely, and suspected by the family and friends of Cáceres, that the Honduran government was involved in her assassination.

This is not a hyperbolic statement. On July 15, 2013, a collegue of Cáceres, Tomás Garcia, was murdered by gunshot in broad daylight by a Honduran soldier in front of 200 to 300 people while Garcia was peacefully marching to deliver a message to the companies constructing a dam near his community.

While a handful of corporate media have reported the assassination of Cáceres, and some have even mentioned the Honduran government as possibly being involved, what is never mentioned in the news reports is the role played by the U.S. government in the 2009 coup that installed the violent regime in Honduras.

Wikileaks cables released in 2011 exposed the role of the U.S. in that reactionary coup. The leaked cables detailed that the forces that overthrew democratically elected President Manuel Zelaya were promised U.S. support.

In fact, they did receive the support they were promised, specifically from current presidential candidate and then secretary of state Hillary Clinton, who made it clear in her memoir “Hard Choices” that she was directly involved in the Honduran coup and intended to keep Zelaya out of office.

In her memoir, Clinton writes, “In the subsequent days [after the coup] I spoke with my counterparts around the hemisphere, including Secretary Espinosa in Mexico.” Clinton says further, “We strategized on a plan to restore order in Honduras and ensure that free and fair elections could be held quickly and legitimately, which would render the question of Zelaya moot.”

Elections far from free and fair

The “free and fair elections” Clinton mentioned were far from free and far from fair. The November 2009 elections were held in a climate of fear, intimidation and absolute rule by the de-facto government of Roberto Micheletti.

During the time of the elections, freedom of assembly, freedom of movement, and press freedom were all suspended, and many Hondurans were subjected to arbitrary arrest, police beatings, torture and even killings by security forces.

Another point that highlights the depravity of Clinton’s statement is that the world’s major election observation teams—the UN, the EU, the Organization of American States, and the Carter Center—refused to participate.

Only one organization gathered election data, the Honduran organization Hagamos Democracia, trained and organized by the National Democratic Institute, which is funded by the U.S. government and affiliated with the Democratic Party.

Berta Cáceres was a vocal opponent of the 2009 Honduran coup. She was killed because she was an environmental activist and indigenous leader who staunchly opposed the repressive, pro-corporate government of Honduras.

Cáceres was killed because she did not hold the same Washington-sponsored free-market enterprise and development views the government has pushed.

A press release by COPINH (National Council of Popular and Indigenous Organizations of Honduras), co-founded by Cáceres, stated: “We know very well who murdered her. We know it was DESA and the Hydroelectric project Agua Zarca, … the government of the United States through the USAID program, … the National Government of Honduras. These are the authorities behind the physical disappearance of Berta. Their hands are stained with indigenous blood and with the blood of the Lenca people.”

The people of Honduras have been brutalized enough by the pro-Washington politicians that have taken the nation hostage. It is time that U.S. imperialism be kicked out of Honduras, out of Latin America, and out of the world!