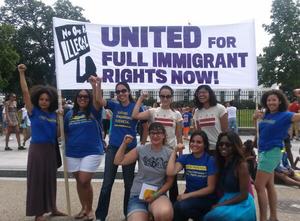 Immigrant rights supporters rallied at the White House on Saturday Aug. 17 for a Unity Rally for Immigrant Rights. The message of the rally was unity - immigrants will not win the fight for equality and legalization divided, and therefore immigrant communities from all over the globe and allies must join together. The event was organized by DMV-LOLA (Latinas Organizing for Leadership and Advocacy), WORD (Women Organized to Resist and Defend), and NAPAWF-DC (National Asian Pacific American Women’s Forum).

The rally highlighted the struggle of immigrant women who make up approximately half of all undocumented and documented immigrants. The rate of death for women crossing the border is 2.7 times higher than that of men. Approximately 3,200 people in immigration detention are women. These women are frequently denied access to critical medical care. Immigrant women also struggle against abuses tied into the system of unjust immigration laws – for example abusers frequently deny undocumented partners access to papers.

Politicians’ shameful inaction on this issue is causing major suffering. While Congress is on recess, it is estimated that over 40,000 immigrants will be deported.

Organized by a coalition of immigrant and women’s rights groups, the rally showcased the stories of immigrant women from around the world. Margie Del Castillo, an organizer with DMV-LOLA, explained, “Immigration is not just a Latino issue. We are here today to show that we are united, and that we need change – immediately.”

The rally hosted a diverse line up of speakers, as well as an open mic. Cambodian sisters Linda Khoy and Lundy Rumparavadie of One Love, D.C. spoke at the rally about their struggle for family unity and against Lundy’s pending deportation proceedings.

Diana Ofunwa of DreamActivist-D.C. came out to the rally as undocumented, explaining how she discovered her status and the organizing work that she has done since then. “My first crime was committed before I could even talk, and ever since then every breath that I’ve taken has been labeled an unlawful one. … Instantly, I linked my existence to shame and fear.” Originally from Lagos, Nigeria, she also explained the struggle of Black immigrants: “Despite there being over 3 million Black immigrants and 400,000 of them being undocumented, we are barely footnotes in the immigration reform conversation.” You can see the complete video of her presentation here.

Catalina Nieto, the Field Director of Detention Watch Network, also spoke about her struggle as an immigrant from Colombia and how challenging the system of immigration laws, detention, deportation and oppression is revolutionary. She led off her speech by proclaiming, “I am undocumented, unapologetic and unafraid.”

Staged in front of the White House, the rally demanded full rights, an end to detention and deportation and a just immigration policy that promotes family unity. Popular chants included, “Immigrant rights, women’s rights - same struggle, same fight!” and “The people united will never be defeated!”

This rally marked an important step toward escalating the level of grassroots organizing and struggle on immigration reform.