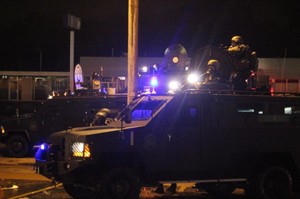 I was at the front of a non-violent march of 3,000 people on the night of Aug. 17 when police forces in Ferguson, Mo. unleashed a coordinated military offensive against unarmed, peaceful marchers.

The police say that they opened fire, using armored vehicles, tear gas, grenades and rubber bullets, in response to Molotov cocktails and shots being fired at them.

That is nonsense. Again, I was there, at the front of the march when the assault vehicles rushed toward and attacked marchers and cops immediately began firing tears gas, rubber bullets and flash-bang grenades into a crowd of defenseless people. For hours, they continued the assault on the retreating crowd.

If their phony story of self-defense is true, why isn’t there video evidence to back that up—especially when you consider that Ferguson is being covered by an army of international media? And, even if their story were true, it would not justify the incredible amount of force that was used.

The simple truth is that the powers of the state—from the federal to the local level—turned a lawful first-amendment assembly for justice into a war zone. The goal of the protesters is getting justice for Michael Brown and his family. Their demand is the indictment of Michael Brown’s murderer, police officer Darren Wilson.

Yet every single media outlet, from the New York Times to local media outlets is reporting the state’s fraudulent version of events. But history will remember the truth. The state has used overwhelming violence in the streets of Ferguson in an attempt to kill a righteous movement for justice.

What are the national and local authorities so afraid of that they have used devastating force against the population? Are they afraid of the protesters? Yes they are, but why? The police forces and the state enjoy a completely lopsided position of power and authority in society. They can get away with murder and then brutalize those who peacefully seek justice—and the media will report their version of events.

Here’s why: When the protests started, the local police forces tried to violently repress them with guns and dogs and assault vehicles. They failed. In response to the police aggression, the people justifiably rebelled and took over the main street of their community. The cops were then forced to adjust their strategy and pretend to make nice with the protesters. But it would only be a matter of days, with the backing of the highest levels of the U.S. government, that the state would escalate the violence.

Why? They know that if they indict Wilson while the people maintain control of the streets that would send a message to every Black, oppressed and poor community across the country that if you rebel you can defeat the police and the powers that be, you can achieve justice.

But the authorities are not interested in justice. Ferguson shows that clearly. They want to maintain the status quo of poverty and racist police terror.

Despite all the odds, thousands of people again took to the streets of Ferguson on the night of Aug. 18. They were again met by police violence. The people won’t be stopped! Victory to the Ferguson Rebellion!