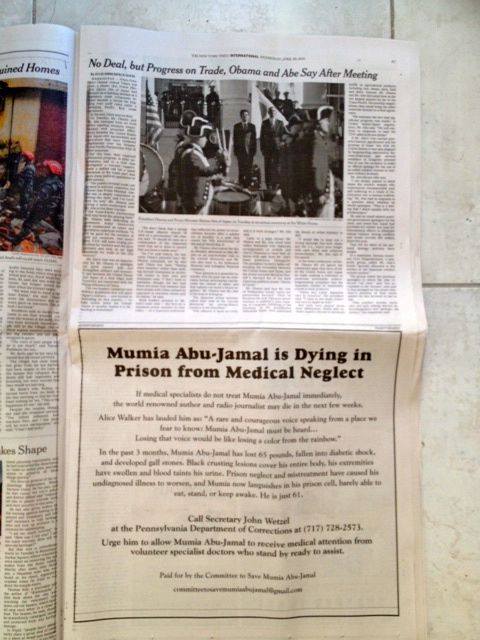 Following is the latest update from Prison Radio on the urgent status of Mumia Abu-Jamal's case. The ANSWER Coalition encourages everyone to read and take action.

On Monday morning Mumia Abu-Jamal was ordered back to the infirmary at SCI Mahanoy in Pennsylvania. All that day his attorney Bret Grote was at the prison. No visitors were allowed, he and Pam Africa could not see Mumia. There has been no contact with Mumia since Sunday, by his family, doctors, lawyers or supporters and there is grave concern that his condition, untreated and mistreated by prison infirmary doctors, could result in his death.

All Out to the Capital

The Dept. of Corrections has turned down Mumia's petition to be given a accurate diagnosis of his condition(s) and his need to be seen by appropriate medical specialists.  His doctor has been prevented from talking to treatment staff and visiting Mumia. On Wednesday, April 29th we will be holding a press conference at Gov. Tom Wolf's office in Harrisburg, PA at the Capitol Rotunda at 11am.

At this point we do not know what is happening with Mumia. Keep your eyes on Mumia! Demand family visitation, and legal access. We must speak out for our brother Mumia, just as he has always spoken out for us.

Often when we call in, prison and state officials have taken their lines off the hook. Know that every single action matters, even when they don't pick up. If they don't answer, please leave a voicemail:

For a more complete list of addresses and faxes etc visit www.prisonradio.org.