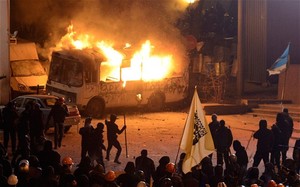 The EU and US have carried out a classic coup d'état in Ukraine using ultra-right forces as human material, anti-war activist Brian Becker told RT. And cementing that victory with an IMF aid package would place Ukraine on a Greek path into Europe.

RT: The US and the EU are considering providing Ukraine with billions of dollars of financial aid. Do you think this will be effective considering the current climate in the country?

Brian Becker: Well the aid package comes because the United States and the EU have staged what is really a classic coup d'état ousting the elected government in Ukraine and carrying out the regime change which we felt was their agenda from the beginning ever since November when the EU gave Ukraine an ultimatum: “Are you with the EU, are you going to integrate into the EU – which of course eventually means integration into NATO – or are you with Russia?”

They were the ones who provoked this crisis, the protests started afterwards. A classic coup d'état has taken place. A rump session of parliament has ousted the existing, constitutionally-elected president. And now there is a reign of terror by semi-fascist and ultra-right groups against others.

So the aid package has to be seen in that context. Behind the aid package, which is designed to stabilize Ukraine as it integrates into the planned integration into the EU, is austerity measures that are really going to hurt the Ukrainian people, especially working people and the poor. That is the real path into the EU. It’s not going to be the German path. It will be the Greek path for Ukraine.

RT: Catherine Ashton is in Kiev right now and a number of US top officials are set to visit the country in the coming days. What does Brussels and the US hope to achieve during those visits?

BB: Well they are basically taking over. The human material has been far-right parties. Of course many citizens have legitimate grievances against the Yanukovich government, there is an intertanglement of all that, but the main vanguard of this movement was the ultra-right, semi-fascist, and hard right but they have had wind in their cells because of the intervention of the EU and the European governments and the US.

And of course they are there now to show the new government, the coup d'état, that “we the West with all of our vast power, our banks, our military, our intelligence agencies, we are with you.” This is designed to shore up those that have taken the power in Ukraine against what may be the next stage of the struggle against those who wanted to go on a different path, who had historically closer relations to Russia or who don’t want just to be minions of the EU and the imperialist powers of the West.

RT: If you look at the beginning of all this, this has kind of started as Ukraine and their relationship with the EU, Brussels now says it will not be signing a trade agreement with Ukraine for now and will wait for the outcome of May’s elections. What are the chances of the deal being sealed then?

BB: The EU is playing with carrots and sticks. There is economic integration, which is going to mean that big parts of Ukraine’s working population will see a deterioration in their living style. The fantasy about entering Europe, with streets being lined with gold, that is a fantasy because the real project is the IMF-based austerity program. They can’t fully implement that program right at the moment because it will be a stark reminder of or a confrontation with the reality that integration into the EU will be a bad deal for many, many Ukrainians, millions of them.

So they may want to hold off for a few months in order to try and stabilize the situation politically. Now that they ousted the existing government, carried out the regime change in this important country in that it’s historically tied to Russia – 46 million people, the second-biggest military in Europe – they want to hold off because that economic program has a lot of sticks, not just carrots, mostly sticks for the poor and working people of Ukraine.