U.S. steps up interference in Syria as elections approach 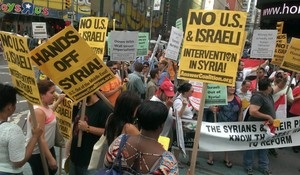 RT: President Obama has just met with the Syrian opposition leader Ahmad Jarbar, but won't talk to the official government representatives or President Assad. Why is that?

Brian Becker: I think it’s an indication that the Obama Administration in spite of the fact that its policy has completely failed, in spite of the fact that its policy of funding, of fueling and arming the armed opposition to the Assad government with the idea that it would invariably succeed in overthrowing the Assad government, in spite of those set-backs to its policies, it’s hanging tough so to speak, showing that it is bestowing the legitimacy or power of the US with the armed opposition.

In spite of the fact that the armed up opposition isn’t winning on the battlefield and as we can see does not have the popular base of support necessary to oust the Assad government, so they are just continuing with the same script. Syrian people are the ones who pay this terrible price in blood and treasure as the bleeding goes on. I think it is wrong.

RT: The statement after their meeting in the White House says there's no future for Assad in Syria, meaning he has to go, but the solution has to be political. How's that possible?

BB: You cannot really have a negotiation with the party that you say has no future in the role of Syria, especially when it is the sovereign government of Syria. This is just a complete misnomer, it is an oxymoron. If the US is serious about coming up with a political settlement, with a negotiated solution, the thing that the Syrian people want, the thing that the Syrian society needs so badly, then they cannot say in advance that there is no future for the Assad government.

RT: Why is Washington saying the presidential election should be postponed, if it wants Assad to leave office?

RT: In his meeting with the Syrian rebels, The US Secretary of State John Kerry allegedly told them they've wasted a year in the fight against Assad. He was critical of the way the supply of aid and weapons to the opposition was handled. What do you make of that?

BB: John Kerry has no right, he is interfering. Can you imagine if another country decided “Oh, you know, there should be more coordinated armed opposition groups inside the US”? The US would recognize it to be completely outside of the political rights and outside the boundaries of international law. But John Kerry, because of the arrogance of power, feels he can speak like this.

John Kerry, I think personally, is frustrated because it was his policy that fueled the civil war. He wanted the bombing campaign last August and September. Obama wisely stepped back and took the lifeline that Russia threw them for a negotiated settlement to get rid of Syrian chemical weapons. John Kerry is frustrated because he is hard-liner, he is neo-conservative in Syria, in Ukraine and all these hotspots, doing what the neo-conservatives have done for the last decade, which is carrying out one reckless venture after another and that has not helped the US.

RT: France believes Assad is hiding part of its chemical arsenal and continues to use it secretly. Is there any evidence for that?

BB: They do not offer any evidence. They have just as little evidence that is no evidence that Kerry and company tried to offer last August and September. They could provide none when there was a real international scrutiny demanding evidence. They just say it is suggested that chlorine tanks were used. Why would the Assad government go back and use chemical weapons right now, when of course that would be the one thing that would undo the international settlement that prohibited foreign Western powers from bombing the country.

He has no real interest in doing this. It just does not make sense. But let us not forget, France is still angry because they are the old colonizers in Syria. They do not want the independent government in Syria. They think Syria should belong to them, to the French empire. They are still living in those days.

RT: The French foreign minister also said he regrets the decision not to carry out airstrikes against the Syrian government, which they believe used chemical weapons. As far as we know, the UN report never said the government was the one to use it...What’s your take on that?

BB: They are just making things up as they go along. This is the propaganda script. France is the ex-colonizer of Syria, along with the US it represents the most militaristic interventionist wing of the Western military powers. And the French are frustrated because they too think they are along with the US should be able to dictate as they used to dictate the terms of who leaves, who dies, who rules in Syria. They have their mentality of the former colonizer. They are frustrated right now because Assad is not being defeated and so they are frustrated, they are making stories up to delegitimize the government again because they do not want the elections go forward.

RT: Now that the UN envoy for Syria has resigned, what could happen to the peace talks?

BB: He said that the international community was hopelessly divided which meant that Russia and China had failed to acquiesce to the demands of the Western powers, and particularly the US, France and Britain, to carry out the ouster of the legitimate sovereign government in Syria. He recognizes that the Syrian government does not stand alone and is not going to fall. They have international allies, not because the Russians or the Chinese are following the script from Assad’s playback, but because they believe that the US and Western powers do not have the right to militarily intervene over and over again and topple sovereign governments. He sees negotiations are hopeless because the US side and the US-backed rebels really do not want to negotiate.