U.S. steps up war: The ABCs of U.S. policy toward Syria 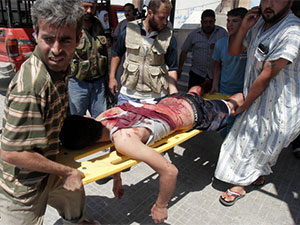 Civilians killed by Syrian rebels, who are being funded, armed and trained by the U.S. government.
While pretending to be cautious about its intervention in Syria, the Obama administration has conducted a massive clandestine operation over the past two years to pump guns, heavy military equipment and money to fuel the civil war that is destroying Syria.
The CIA is the anchor of this highly coordinated secret operation.

Under the CIA’s supervision, more than 160 military cargo flights have delivered weapons to anti-government armed units in Syria. (The New York Times, March 25)

One of the ridiculous fictions about the war against Syria is that the Obama administration publicly claims “caution” in arming the rebels, in contrast to Saudi Arabia and Qatar, which have openly acknowledged their role in fueling the civil war by sending arms and money to the enemies of the Assad government.

Saudi Arabia and Qatar are both absolute and hereditary monarchies whose existence is completely dependent on their role as clients of the United States. So too is the royal family in Jordan, which allows its territory to be a transfer pivot for the massive arms shipments into Syria.

Qatar, with its citizen population of only 250,000 people, does not derive its fighting posture toward Syria from a robust military capability. That is a joke. Rather, Qatar is the location of the Pentagon’s Central Command Forward Headquarters and its Combined Air Operation Center. Qatar is also home to Al Jazeera, which promotes the cause of the armed rebellion against the Assad government.

Qatar is not directing anything except that which the Pentagon approves.

The equally hideous Saudi royal family remains on the throne only because of its close ties to the Pentagon and CIA.

The Saudi monarchy is protected by U.S. imperialism because it is part of an undeclared but real U.S. sphere of influence, and it is the largest producer of oil in the world. The U.S. attitude toward the Saudi monarchy was put succinctly by Ronald Reagan in 1981, when he said that the U.S. government “will not permit” a revolution in Saudi Arabia such as the 1979 Iranian revolution, which removed the U.S. client regime of the Shah. Reagan’s message was clear: The Pentagon and CIA’s military forces would be used decisively to destroy any democratic movement against the rule of the Saudi royal family.

Reagan’s explicit statement in 1981 has in fact been the policy of every successive U.S. administration, including the current one.

It is hard to overstate the extreme irony of Secretary of State John Kerry's public condemnations of Iran and Russia for maintaining their longstanding relationships with the sovereign and secular government of Syria, while the United States uses the most anti-democratic hereditary monarchies in the Middle East as their clients to fuel a civil war under the banner of “democracy” and “change.”

U.S. policy appears as irony, but it reveals a remarkable consistency and sameness in purpose regardless of whether the occupant in the White House is a conservative Republican or a centrist Democrat. Liberal Democrats in Congress and right-wing Tea Party types are unanimous in their boisterous and vile support for overthrowing the independent governments in the Middle East. At most, their differences are about some tactics versus other tactics. They profess the same goals and objectives. The invasion and war in 2003 overthrew a nationalist, secular and independent government in Iraq. The NATO bombing war of Libya destroyed Qaddafi’s government, which was likewise nationalist, secular and independent. Now the U.S. war machine and clandestine spy services are determined to destroy a similar government in Syria.

The fevered demonization campaign directed at Syria’s government by the same forces that protect the most retrograde monarchies in the Middle East should give pause to those on the “left” who function as an echo chamber for the arguments and rationales provided by the corporate-owned media and the U.S. government.

The U.S. seeks only puppets and client regimes in a region that possesses two-thirds of the world’s oil. The rest is rhetoric. That is the ABCs of the endless pursuit of regime change by the United States against independent governments whose origin and existence was a consequence of the anti-colonial revolutions that rocked the Middle East in the 1950s and 1960s.
Anti War
Do you like this post?
Tweet
Donate to the Movement Volunteer - Get Involved Today