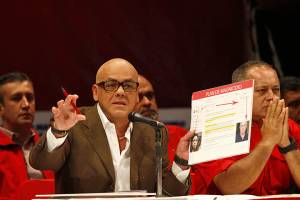 In a dramatic televised exposé May 28, Venezuelan authorities revealed email messages from ultra-right opposition leaders that show the direct role of the U.S. State Department in financing and instructing Venezuelan coup plotters.

The incriminating emails, “many, many” captured by Venezuelan authorities, prove that the violent attacks that began in February 2014 and this latest coup plot were coordinated by Washington.

On Venezuelan TV, Jorge Rodríguez, mayor of Libertador municipality in Caracas, quoted from emails written by Maria Corina Machado to an accomplice, professor Gustavo Tarre of the Central University of Venezuela. Tarre was a leader of the right-wing Christian social party, COPEI.

Machado, active in the April 2002 coup against President Hugo Chávez, prides herself on being one of the most aggressive in pushing for the government’s overthrow.

In one email, she complains that some in the opposition only “… send formal declarations and tweets. No, I’ve already decided and this struggle is until this regime is gone and we fulfill our promise with our friends in the world … Kevin Whitaker already reconfirmed the support and indicated the new steps. We can rely on a bigger checkbook than the regime’s, to break the ring of international security that they have created …”

The checkbook is of course signed by Washington.

Who is Kevin Whitaker? He became U.S. ambassador to Colombia in April 2014, having been appointed by President Obama. Whitaker has been assigned previously to Honduras, to Venezuela from 2005 to 2007 and was in charge of the State Department’s Office of Cuba Affairs from 2002 to 2005.

Rodríguez, also president of the United Socialist Party of Venezuela (PSUV), asked on TV, “Does the U.S. State Department know that when the Venezuelan ultra-right attempts its criminal events that violate our constitution of peace, of democracy, it is asking for instructions and authorization of a State Department official? Does President Obama know of this? Does Secretary of State John Kerry?”

The Bolivarian government has complained of the role of right-wing forces in Colombia against Venezuela, including ex-president Alvaro Uribe’s links to paramilitary groups operating on the border, poised for armed intervention.

Obviously, Whitaker’s ambassadorship is not confined to Colombia and Venezuela’s complaint of interference from Colombia is not imaginary.

Machado wrote in another email: “I believe the time has come to join forces, make the necessary calls, and obtain the financing to annihilate Maduro … and the rest will come falling down.”

As late as May 23, Machado wrote in an email: “I’m fed up with waiting. We have to take out this trash — starting with the one heading it and by taking advantage of the world situation with Ukraine and Thailand as soon as possible.”

The latest assassination plans against President Nicólas Maduro, National Assembly President Diosdado Cabello and other leaders exist because U.S. imperialism has failed to unseat the revolutionary government either by elections or economic sabotage.

Despite 15 years of U.S. machinations, the majority of people back the revolutionary process and have overcome many difficult challenges.  But the plans in Washington continue.

Machado is not the only one involved in the coup plans. Others are implicated, including William Brownfield, former U.S. ambassador to Venezuela, Pedro Mario Burelli, former director of the oil company PDVSA who now lives in Washington, and fugitive banker Eligio Cedeño, now in Miami.

The emails and phone calls of the opposition were intercepted by court order obtained by the Bolivarian Intelligence Service. The government is proceeding with prosecution of Machado and others for plotting criminal actions.

If Venezuela’s revolution were overthrown, U.S. imperialism and its right-wing stooges would unleash a bloodbath reminiscent of the fascist terror that reigned from Argentina to Chile in the 1970s and 1980s.

It is vital that we in the progressive movement inform the people of the United States of U.S. government plots and mobilize in the Bolivarian Revolution’s defense.