Postal workers go on hunger strike to save Postal Service 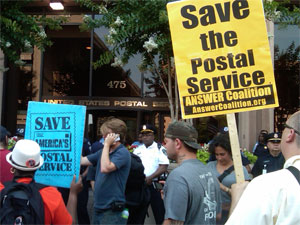 Workers and their supporters rally to save the USPS, Washington, D.C., June 28.

From June 25-28, postal workers and community allies engaged in a hunger strike and series of actions to bring attention to major cutbacks at the United States Postal Service. Initiated by Communities and Postal Workers United, the week of action drew a large amount of media attention to the devastating reality of the postal cuts being proposed by Congress and Postmaster General Patrick Donahoe. The ANSWER Coalition in Washington, D.C., played an active part in providing organizational and logistical support for the week of action.

CPWU chose this past week for its actions as many postal cuts are due to go into effect on July 1. The Postmaster General announced that on that date single-piece overnight first-class mail would cease, followed by the closure of half the country’s mail sorting plants. Further, half the country’s post offices will see hours reduced anywhere from 25-75 percent. All this together will result in 40,000 job losses. Hunger striker Matt McAuliffe aptly described these cuts as “sending the service into a death spiral.”

The current cuts are part of a multi-year campaign by Congress, led by some of its most right-wing members, to defund the Postal Service, making it appear as less profitable than it actually is, and thus make it easier to break up and privatize mail delivery. In 2006, Congress passed a “pre-funding” mandate that requires the USPS to fully fund pensions 75 years in advance; in other words, to fund pensions for potential future workers who may not even be born yet. So far $44 billion, or $5.5 billion per year, has been “pre-funded.”

In addition, the USPS has also been found to have overpaid into pensions to the tune of $60-85 billion. These sums taken together make it quite clear that the 2006 pre-funding mandate, not to mention pension overpays, has been the central factor in causing losses at the USPS. In the words of hunger striker Jaime Partridge, "It's not the internet, not private competition, not the recession -- Congress is killing the US Postal Service."

Congress, led by millionaire Congressman Darrell Issa, has used these losses to build a case for further cuts, essentially reducing the capacity of the Postal Service to maintain a high level of service. Inevitably, this will open the door for private parcel delivery services to fill the void with likely more expensive services to replace reduced Post Office capabilities and hours.

As hunger striker Tom Dodge puts it, "Corporate interests, working through their friends in Congress, want to undermine the USPS, bust the unions then privatize it."

The 10 hunger strikers, mostly current and retired postal workers, who descended on Washington, D.C., conceived their action as a response to this congressional “starving” of the Postal Service, by starving themselves over the four-day period. Beginning Monday with a press conference sponsored by Representative Dennis Kucinich, hunger strikers engaged in several actions throughout the week.

Notably, hunger strikers delivered a $44-billion check to the Treasury Department, demanding a refund for the pre-funded money, protested biased editorials in the Washington Post, and held a demonstration in front of Postal headquarters on June 28.

The week of action got a significant amount of media attention, including stories in Bloomberg News, Reuters, the Washington Post, Los Angeles Times, CNN, NPR, Fox Business Channel, and the Chicago Tribune.

This struggle is part and parcel of the free-market fundamentalist attacks on the living standards of working people in this country, part of the drive to turn the future of all except the super rich into a bleak landscape of high unemployment and low wages.

As the hunger strikers themselves often chanted: “They say cutback, we say fight back!”

Below you can find links to just some of the press coverage the hunger strike received: