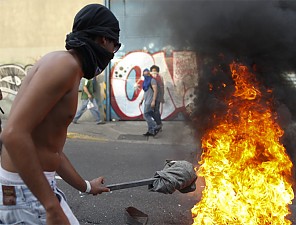 Right-wing street barricades are more than physical barricades; people in affected neighborhoods are virtually kidnapped, with food, fuel and services blockaded. It is a form of terrorism against the population. 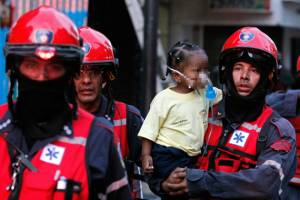 While the U.S. government and media support the Venezuelan opposition to the Bolivarian Revolution and portray it as a peaceful movement, the violence of this movement is exposing the right wing’s true nature.

There have been dozens of violent actions by fascist organizations, intent on carrying out terrorist plots in several urban areas of Venezuela. While the attacks are not widespread through the country, they are nevertheless causing serious destruction where they hit.

Almost 40 people have died, with at least half of those killed through outright assassination by fascist gangs. Theses gangs have ambushed pro-government supporters and National Guard members.

In the past few days, the government of President Nicolás Maduro has launched an offensive to take back control of the barricaded neighborhoods and to arrest the leaders of the “guarimbas,” the name given to the violence.

They, the Venezuelan corporate elite and U.S. imperialism, are violently opposed to the ongoing radicalization of the Bolivarian Revolution. Recent government measures include restrictions on corporations’ profit-gouging of the population and widening expropriations.

Maduro has mobilized the National Guard, the Bolivarian National Police (PNB) and Bolivarian National Armed Forces (FANB) to re-take the most entrenched areas of fascist operation, such as municipalities of eastern Caracas and the far western state of Táchira, bordering Colombia.

Táchira has been the most challenging area, where for several weeks the fascist groups maintained dozens of massive street barricades.

It is important to understand that these are more than just physical barricades that block streets and traffic. When anyone tries to cross them or remove the barricades, they are met with violent attack. People in affected neighborhoods are virtually kidnapped, with food, fuel and services blockaded. It is a means of terrorism on the population.

The mayor of San Cristóbal, Daniel Ceballos, openly supports the terrorist attacks and took active part in the violence, covering his face with a bandana. But he was identified because his eyes, nose and other parts of his face were sufficiently visible to identify him.

Ceballos was quickly arrested, tried and sentenced to 15 months in prison, along with the mayor of San Diego, Vicenzo Scarano, in Carabobo state, west of Caracas, for refusing to act against the violence or to support the police forces in quelling the attacks.

After a four-day operation that ended March 30, the PNB and National Guard restored order in neighborhoods of San Cristóbal, Táchira.

With the clearing of the fascist outposts, the people are also being mobilized to defend their neighborhoods with the help of the state’s forces.

And yet, the international media led by the U.S. press claims the Venezuelan government is engaging in repression and “militarizing” Táchira. They say nothing about the fascist terror.

What has actually taken place is the liberation of more than 39,000 people in San Cristóbal’s neighborhoods who were held captive.

On April 2, after the barricade demolition in San Cristóbal, Gen. Miguel Vivas Landino of the FANB told a television interviewer, “First of all, a revolutionary, socialist, Bolivarian and Chavista greeting. ... We have been more than three hours in a community gathering, in conversation with the barrios, among them Sucre, Pirineos, to hear the people’s concerns and address their needs. There are a great number of needs here. ... We have distributed 12,000 tanks of cooking fuel, because trucks couldn’t travel here.

“We have dismantled 56 barricades and collected 18,000 tons of garbage from the barricades. ... We are very committed to our people, following the instructions of our Commander-in-Chief Nicolás Maduro to bring peace and tranquility, through services, food and to guarantee them peace, and to keep them from being mistreated by the violent groups.”

Right-wing parties like Voluntad Popular, whose leader Leopoldo López is currently under arrest, have been exposed through government operations as directing and carrying out the violence. Aragua Governor Tareck el Aissami announced the discovery by authorities of 100 tons of fireworks and detonators in the state of Aragua, just to the west of Caracas. Materials of such mass quantity could easily be used as explosives.

The two men in possession of the materials, Willian Sánchez Ramos and Edward Tovar Vargas, are leaders of Voluntad Popular. They were stopped in their SUV packed with heavy arms and arrested. The armored vehicle was also equipped to spread gasoline in the streets. A 21-year-old woman was arrested with them who carried nail bombs.

El Aissami accused them of leading an attack days earlier in the neighborhood of San Isidro, Chacao municipality, which he described as a “terrorist attack, well-planned, premeditated, they began a series of violent attacks on the neighbors’ housing. ... It coincides with the assassination of [National Guard] Captain José Guillén Araque, close to San Isidro, armed bands ... when the Guard arrived, he was ambushed and assassinated.”

One critical incident was in Caracas’ eastern municipality of Chacao, state of Miranda. The headquarters of the Ministry of Housing and Habitat was firebombed on April 1 by the fascist gangs that set off destroying property in the area after following right-winger María Corina Machado’s staged procession to the National Assembly.

Machado was one of the 2002 coup leaders against then-President Hugo Chávez, and a signer of the order cancelling the Constitution at that time.

On March 31, Machado was removed by vote of the National Assembly delegates for accepting the post of Alternate Ambassador for Panama to the Organization of American States. The OAS is dominated by U.S. imperialism and its headquarters are based in Washington, D.C. Panama’s government is allied with Washington, and gave Machado the post to give her a platform to speak and denounce the Venezuelan government.

The National Assembly revoked her deputy status, declaring her in violation of articles 149 and 191 of the Bolivarian Constitution for accepting another country’s position.

After her exhortation to the youth in the crowd, they proceeded to carry out multiple acts of violence, the main one being the burning of the Ministry of Housing. It was burned extensively, and a nursery for 89 children was destroyed.

Ever since the victory of Hugo Chávez’s first presidency in 1998, the U.S. government has financed opposition groups within Venezuela. The stated objective is “promoting democracy and democratic civil society organizations.” But the real plan, a multi-faceted strategy, is to destabilize, discredit and overthrow the Bolivarian Revolution.

Washington had its fingerprints on the April 2002 coup, helped direct the oil-industry shutdown in 2002-2003 and fashioned the opposition’s election intervention in 2010 after the U.S.-inspired abstention by the right wing failed in 2005.

Today, U.S. officials admit at least $5 million has been funded annually for the right-wing opposition. On the ground in Venezuela, the U.S. Embassy has been exposed for encouraging youth and student organizations to conduct terror attacks.

Students who support the Venezuelan revolution have denounced a “silent strike” being enforced in the major private universities by right-wing professors and rectors. Those schools include Central University of Venezuela, University of the Andes, University of Carabobo, and others. Some 60,000 students alone in Carabobo are unable to attend school. When students and professors have tried to resume classes they are threatened by violent groups.

Venezuelan intelligence agencies and popular investigators have exposed the receiving end, with fascist youth being recorded, asking how much and when they will receive funds, etc.

Now, right-wing U.S. Congress members Robert Menéndez and Marco Rubio are sponsoring a bill, the Venezuela Defense of Human Rights and Civil Society Act of 2014, to increase funding to $15 million.

The United States government is employing a range of tactics in its strategy of counterrevolution in Venezuela. A recent interview with Cuban revolutionary and double agent Raúl Capote shows not only the long-term plans of infiltration and destabilization that Washington employs against Cuba, but also Venezuela.

What is taking place in Venezuela since Feb. 12 is the tactic of terrorism that U.S. imperialism and its followers now feel compelled to unleash, because the vast majority of Venezuelans refuse to surrender the enormous gains they have won.

Our duty in the United States and worldwide progressive movement is to educate the people, to mobilize publicly to defend the Bolivarian revolutionary process and to fight for an end to the U.S. government’s strategy of counterrevolution.