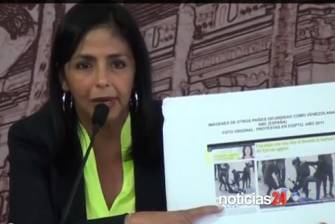 Venezuela’s Minister of Communication and Information, Delcy Rodríguez speaks Feb. 16 to denounce the international media’s publication of several images falsely attributed to Venezuela. Here she shows a famous photograph of a protest in Egypt falsely identified as Venezuelan police repression.

This article was originally published Feb. 17. Leopoldo López has since been taken into custody, but the right wing's destabilization drive continues.

A coordinated operation of Venezuelan right-wing forces, the U.S. government and imperialist media is underway against the revolutionary government of President Nicolás Maduro and the masses who back the country’s move toward socialism.

On February 12, people marching in “Youth Day” actions—to celebrate the 200th anniversary of a key independence battle—were attacked by opposition forces and three people were killed by gunfire with dozens injured. The shootings are being investigated.

Violence has continued by right-wing gangs, in what many believe may be a prelude to an attempt to overthrow the Maduro government.

Openly calling for Maduro’s overthrow is Leopoldo López, leader of the right-wing Voluntad Popular (Popular Will) party. He had called for protests on Feb. 12 in the streets to force an “exit” of President Maduro.

An arrest warrant has been issued for López for promoting the violence and he is now in hiding. He has announced an opposition march for Tuesday, Feb. 18 and is seeking renewed confrontation this week. His blatant call for the government’s overthrow now has the blessing of Washington.

In a veiled threat to the Bolivarian government, U.S. Secretary of State John Kerry denounced the arrest warrant for Leopoldo López and detention of “anti-government protesters.”

An official response by the Venezuelan government rejected Kerry’s statement, saying they are “one more maneuver of the government in Washington to promote and legitimize the attempts to destabilize Venezuela’s democracy by the violent groups in recent days.”

Yesterday, the Bolivarian government expelled three U.S. diplomats for meeting with opposition forces in universities, under the guise of offering them visas. Maduro said, “We have been watching them in the universities holding meetings … let them go conspire in Washington. Leave Venezuela alone in peace.”

In explaining on television the reason for the diplomats’ expulsion, Maduro exposed the U.S. government’s blatant threats, when Venezuela’s ambassador to the United States Roy Chaderton was called to meet with a U.S. State Department official in Washington yesterday.

“Alex Lee, undersecretary for Latin America, gave him a message to the Venezuelan government. He said the United States demands that the people of Venezuela sit down to dialogue with the opposition; second, that we release all those who were arrested for the recent disturbances, and third, he said ‘the arrest of Mr. Leopoldo López could cause many negative consequences with international ramifications’…”

Maduro continued, “I do not accept threats from anyone in the world. There is no force that will detain the Bolivarian Venezuelans in our task of carrying out justice and defeating fascism. And third, in Venezuela we are prepared at any cost to defend our peace, independence and democracy…”

The violent attacks are reminiscent of the right-wing violence leading up to the April 2002 coup that overthrew President Hugo Chávez for 48 hours before the masses and pro-Chávez military forces restored him to the presidency.

The Venezuelan ruling class and its supporters are infuriated at the continuing advances of the revolutionary process, with radical economic and social measures carried out by the democratically elected presidency of Nicolás Maduro. Some of these measures include tight restrictions on the capitalists’ profit-gouging practices.

Much of Venezuela’s food and essential items for the population are imported from abroad. Giant food importers, national and foreign—from Néstle to Venezuelan conglomerate Polar—have up to now enjoyed enormous profits because of their monopoly power and practice of hoarding massive quantities of commodities to create chaos and shortages.

Corporations that sell consumer goods from food to appliances and other basic items are known to gouge the public with price mark-ups as high as 5000 percent. Food and basic-item shortages are a source of much discontent and a weapon used by Venezuela’s capitalists to foster opposition to the government.

A radical “Law for the Control of Fair Costs, Prices and Profits” was announced by Maduro on January 23. Among the measures are a 30 percent limit on corporate profits for items sold to the public, and severe penalties on companies that hoard consumer items.

Several days later, on February 4, Maduro declared he will undertake “the most radical measures to protect our people’s economy” and that any company that is not in compliance by February 10 will be expropriated.

The right-wing violence that was unleashed two days later was no coincidence.

With each new revolutionary act restricting the capitalists, the rich are escalating their confrontation and aggression, now openly calling for Maduro’s overthrow.

U.S. imperialism is not standing by the sidelines, and Kerry’s statement is one more proof of its counterrevolutionary intents.

Outright lies and false photographs are being published and broadcast worldwide by U.S. and Venezuelan opposition media, to try to portray revolutionary supporters as responsible for the violence, or to claim that Venezuela’s government is severely repressing the opposition.

Venezuela’s Minister of Communication and Information, Delcy Rodríguez, spoke on Feb. 16 to denounce the international media’s publication of several images falsely attributed to Venezuela. In one example, she showed a well-known photograph of a protest in Egypt published by Spain’s ABC, of SWAT police brutalizing demonstrators.

But that and other photos are identified as Venezuelan police repression. Rodríguez promised judicial action against any media violators.

Swift actions in support of Venezuela’s sovereignty took place over the weekend by activists, from Washington DC to Argentina and elsewhere. In the United States, the majority of Venezuelans living in the U.S. tend to be from the upper class and are hostile to the Bolivarian revolutionary process.

As the ANSWER Coalition, the FMLN, the PSL and local DC community groups stood with placards to defend Venezuela in front of its embassy in Washington on Saturday, a crowd of right-wing Venezuelans hurled racist and anti-worker insults. In sub-zero weather, the progressive activists stood their ground for six hours until the right-wing protesters left. (See story here.)

Another protest is planned in front of the Organization of American States on Wed., February 19, and in San Francisco, a protest will be held today in the heart of the Latino Mission district.

Urgent messages of solidarity and mobilization continue worldwide. Meanwhile, inside the country, the Venezuelan masses who have seen their lives greatly improved by the revolutionary process begun by the heroic leader Hugo Chávez  defend their government and are mobilizing to defend their gains.

On Feb. 15, tens of thousands of Venezuelans marched to demand an end to the violence and to defend their revolution.

The Party for Socialism and Liberation stands with the revolutionary masses of Venezuela and the government of Nicolás Maduro. We demand, “U.S. Imperialism, Hands Off Venezuela!”