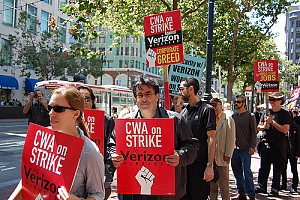 The struggle of Verizon workers for a good contract has reached a new stage. Because of the dedication and mobilization of tens of thousands of working people on the East Coast, and solidarity actions and planned actions across the country, Verizon was forced to return to the bargaining table.

The national leadership of the Communication Workers of America (CWA) and the International Brotherhood of Electrical Workers (IBEW) has credited these actions as the reason that the company has dropped some, but not all of the concessionary demands. As a result, the leadership has determined that enough of a move was made to justify returning to work for the time being. They have stated quite clearly that they will continue a campaign of mobilization in the near future and if management fails to do act in good faith, they have the option of going back on strike.

The unions have requested all picketing and solidarity actions to end, so that the negotiations can begin again. Therefore, the ANSWER Coalition’s National Day of Action to support the strike set for Wednesday, Aug. 24, will not happen.

CWA and IBEW released a joint statement on Aug. 20, which said: “We have reached agreement with Verizon on how bargaining will proceed and how it will be restructured. The major issues remain to be discussed, but overall, issues now are focused and narrowed.

“We appreciate the unity of our members and the support of so many in the greater community. Now we will focus on bargaining fairly and moving forward.”

During the strike, ANSWER mobilized for and participated in dozens of picket lines around the United States. ANSWER’s call for a National Day of Action drew a huge response from working people, students and so many in the anti-war and progressive movement. Actions in dozens of cities were set to take place.

ANSWER will continue to stand with our sisters and brothers in CWA and IBEW as we monitor the negotiations with Verizon.

Background to the Verizon struggle

Verizon is a huge company that made over $19 billion in 2010. The company has a higher rate of profit than even AT&T or Sprint.  Most of that profit was created by the workers—the 47,000 members of CWA and IBEW who went on strike on Aug. 7. Most of the rest of the profit was made by workers in the wireless division, where the company has done everything it can to stop workers from winning a union voice.

Despite sitting on a mountain of profit, the company began negotiations by demanding that the workers accept deep cuts. Verizon wanted to freeze pensions for current workers and eliminate them for future employees. It wanted to decrease job security and increase contracting out, including shipping more jobs overseas. It wanted cuts in sick leave and health care plans. In total, Verizon had about 100 demands that would have eliminated rights and benefits that took decades to win.

The energy on picket lines across the country showed that the spirit of resistance that began in Wisconsin was living on in the hearts of those affected by this company—both its workers and customers.

As these negotiations continue, it is important to understand what the workers are up against and most importantly why this struggle is a fight in which we all have an interest.

Verizon is not just big and hugely profitable. It is also controlled by finance capital. Over 50 percent of the stock is owned by financial institutions like investment banks and mutual funds. The biggest blocks are owned by names that may be familiar: Capital World Investors, State Street Bank, BlackRock, Bank of New York Mellon Corporation, JP Morgan Chase and others. Many of these are known for buying up companies, ripping them apart for maximum profit, laying off thousands of employees, particularly in mergers, as well as all kinds of the worst discrimination.

Verizon is an example of the trend toward monopoly where the company can exercise monopoly control with the ability to jack up prices and decrease services. In the Android market, where Verizon controls the lion’s share, just three companies control over 85 percent of the market. In the iPhone market, just two companies (AT&T and Verizon) control nearly 100 percent of the market. In broad areas of the country, a similar near monopoly exists in the land line market. This translates into greater company political and economic power that is exerted at the bargaining table.

Verizon has received billions in government aid. While most of the aid given during the Bush years went to the biggest banks like Citigroup, Bank of America, Goldman Sachs, Swiss-based UBS and British based Barclays, Verizon got $1.5 billion in 2008 from taxpayers.

Yet, now they want to use the wealth and power that that money bought to harm the communities in which Verizon workers live. By cutting the incomes of these families, whole neighborhoods will suffer. Maintenance will go down, foreclosures will go up. Purchases will decline and more layoffs will follow.

Not only has the profitable Verizon been taking public aid while the unemployed get cut off of aid, but Verizon has also been aided by the courts. Injunctions have been imposed against the unions which limit pickets to tiny numbers in relation to potentially larger numbers of scabs crossing the line. Other injunction terms limit other basic freedoms, like the right to take pictures of those crossing the line or the right to stand close to a door.

While Verizon has been quick to get government aid that the rest of us can never get, it admits that Verizon’s “effective tax rate is significantly lower than the statutory federal income tax rate.”

Verizon is getting extra rich through its foreign investments. It operates in a large number of countries around the world from Canada to India to Pakistan and beyond.

Vodafone based in Britain owns 45 percent of Verizon Wireless. Vodafone has its tentacles sucking profit across much of the globe. The second largest institutional owner of Vodafone is a U.S.-based corporation FMR. The joint operation of Verizon wireless makes the struggle against Verizon even more of an international one, since that relationship offers material aid to Verizon in a strike.

Verizon also is a key player in the U.S. military-industrial complex. It was the 19th largest federal government contractor in 2010. Combined revenue from these contracts in 2007, 2008 and 2009 amounts to $2.3 billion in military contracts, and $1.6 billion in civilian federal contracts. Among the agencies that Verizon has contracts with are Homeland Security Department, Defense Logistics Agency, the Navy, the Defense Department, State Department, Interior Department, National Security Agency, Internal Revenue Service and the Health and Human Services Department.

‘An injury to all’

Verizon’s demands to cut the income and rights of tens of thousands of families is an attack on all of us. The forces that lie behind Verizon’s actions are the same forces that want to drive down the level of wages, health care and pension rights to zero or the closest level to that that can be found.

The fact that so many Verizon union members, their families and community members filled the picket lines with determination gives the bargaining more power and gives all of us more hope.

Let’s remember that the company has admitted that it turned over millions of phone records to the FBI and the NSA on 94,000 occasions between 2005 and 2007 and that they did so at least 720 times without being compelled to do so by a court order.

Let’s remember that in 2007 Verizon initially refused to allow the pro-choice group NARAL use mass text messaging, claiming that they had a right to block "controversial or unsavory" messages.

When the union restarts its mobilization campaign with informational picket lines and rallies, let’s fill those lines with community people demanding that Verizon workers get a just and decent contract.