Veterans and GIs to the Wisconsin National Guard: ‘Stand with the workers and students!’ 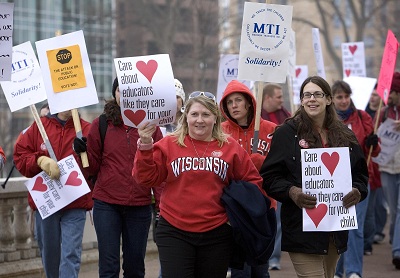 The lives of Wisconsin teachers and school faculty are under attack; the Governor is trying to scare them with the National Guard to shut them up.

Tens of thousands of workers and students are occupying the Capitol Building in Madison, Wis., trying to stop Gov. Scott Walker and his allies from passing legislation designed to strip public-sector workers of collective bargaining rights, and to bust their unions. Walker has announced that he is preparing to call out the National Guard and other law enforcement officers. In response, March Forward!, an organization of active-duty service members and veterans, has issued the following open letter to the Wisconsin National Guard. Please share it far and wide on Facebook and other social media websites.

To our brothers and sisters in the Wisconsin National Guard:

We are writing to you as veterans and active duty troops, who are watching closely the growing protests in your state.

Your governor, Scott Walker, is preparing to use you to smash the right of your family, friends and neighbors to peacefully demonstrate.

There are two sides in this fight.

On one side stand thousands of teachers, high school and college students, public sector workers, steelworkers, janitors, firefighters and nurses.

On the other side stands a tiny group of multi-millionaire business executives and corporate fat cats, represented by their good friend Scott Walker.

Those protesting are from the same neighborhoods and communities we all come from. They work the same jobs and attend the same schools. Many of you probably have family and friends demonstrating.

We know why most of us joined the military: for a job, access to health care and the ability to go to college. That is the very same reason why over 10,000 people have risen up in protest—for jobs, decent benefits and education. Those rights are under attack. Hundreds of thousands of Wisconsin families are at risk.

We have nothing in common with Walker and his millionaire buddies. None of us own any factories or take home million-dollar bonus checks. In fact, unemployment for Iraq and Afghanistan veterans is 15 percent, nearly double the national average. We have everything in common with those exercising their right to demonstrate—because we are dealing with the same economic hardships that they are. Their struggle is our struggle.

The Wisconsin National Guard already has a dark history of acting against their own communities. Over the years they have been ordered to enforce racist segregation laws, intimidate and attack civil rights demonstrations and crush workers on strike, including the Milwaukee firefighters union in 1973.

The workers and students in Wisconsin are making history right now. If you are called upon, you will make history too—either notoriously, by following bogus orders from corporate lackeys to rob your community of their right to demand a better life; or heroically, by standing with your brothers and sisters and refusing to use force to defend the bonus checks of a few CEOs.

Stand shoulder-to-shoulder with the students, teachers, and working families who are corageously fighting for their lives, not against them! They are not our enemies; our enemies are the ones pulling the strings from corporate boardrooms. It is your right to enter the history books as heroes who stood with your community, not as thugs for big business.