Veterans' appeal to National Guard: "Stand with Ferguson protesters, not the police!" 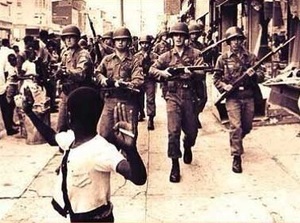 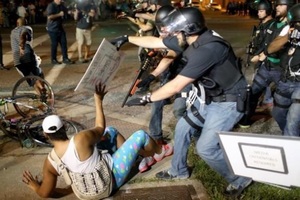 To our brothers and sisters in the Missouri National Guard:

We are writing to you as active-duty U.S. service members and veterans, most of us having served in the Iraq war.

You have a choice you can make right now.

The whole world is watching the Ferguson police with disgust. They killed an unarmed, college-bound Black youth in broad daylight, and subsequently responded to peaceful, constitutionally protected protests with extreme violence and repression.

Countless constitutional and human rights violations by these police have been documented over the course of the Ferguson protests – from attacking and threatening journalists, to using tear gas against peaceful protesters, including children.

Now, Governor Nixon is deploying you to serve under the command of those same police forces. But you don't have to follow their orders—you can stand with the protesters instead.

When we signed up, we swore an oath to defend the Constitution of the United States.

The police in Ferguson are violating that Constitution.

The First Amendment guarantees the right to free speech, freedom of assembly and freedom of the press.

These laws are, as we are taught our entire lives, our most cherished Constitutional rights—the whole basis for the “freedom” we are told makes us the greatest country on Earth.

It is undeniable that the Ferguson police have been using extreme violence against peaceful protesters, suppressing the right of the people to free speech and the freedom to assemble. They have attacked crowds, with children in them, with rubber bullets, sound cannons and tear gas. People have been mass arrested for simply being at the protest.

The police have also begun sweeping houses door to door; a clear violation of the Fourth Amendment, protecting our right to have our home entered and searched without a warrant.

Freedom of the press has also been severely infringed upon by Ferguson police. Journalists have been arrested; photo evidence shows riot police firing tear gas directly at reporters and tearing down their camera equipment; Ferguson police have been caught on video threatening journalists with violence if they don’t leave, and declaring that they are not allowed in the protest area.

With such important and dramatic events unfolding, the right of the people in the United States to have the truth covered by the press is essential to any so-called democratic society.

The people have the right to protest. If we were truly honoring our oath, we would be in Ferguson to protect the protesters against the repression of their rights by the police.

We don’t just have a legal obligation, but a moral one

Clearly, we would be within our legal rights to refuse to help the Ferguson police unconstitutionally suppress these protests. But beyond the constitutional case, we have a moral obligation to refuse to participate.

The Ferguson police are treating this like a war. And we know that not all wars are just.

These protests have done something very important in our society: they have raised the deep issues we face of inequality, poverty, racism and police misconduct onto a national stage. It has turned public consciousness to these real problems that plague our society.

Do you really want to be part of suppressing those civilians raising all these important issues on the national stage?

Racist police brutality is a real issue in America

The autopsy of Michael Brown confirms at least five eye-witness accounts that the young man—who was not even suspected of any crime—was shot while he had his hands in the air.

Those of us in the military—especially with combat experience—knows that this flies in the face of any Rules of Engagement, and we know that it is completely ridiculous to believe that Officer Darren Wilson feared for his life in anyway whatsoever.

Increasingly, the issue of rampant police brutality in America—most frequently by white officers against people of color—is garnering more and more attention on a national and international scale.

History is unfolding, with the whole world watching. You have a decision to make on which side of history to be on.

You will make history, one way or the other

If you take part in the suppression of the protests for Michael Brown, we will be enshrined in history just as the National Guard soldiers who followed their orders to attack and repress civil rights actions, union pickets and anti-war protests. History has not looked kindly on them.

But you have the chance to make a different kind of history.

Imagine the powerful impact it would have if you abandoned your posts and marched with the protesters.

That single action could have the biggest possible effect on the crisis in Ferguson and the larger issues it represents in the entire country. It could be a major turning point in the fight against racism, inequality and police abuse.

You wouldn’t be alone. There is a whole community of service members, veterans and civilian supporters who would defend your right to do so. And now, in this critical moment, we are urging you to exercise that right.

This appeal is supported by organizations and individuals who are dedicated and trained to help service members who refuse orders. Sign the appeal here and someone will contact you with more information, or email us at [email protected]

If you are a veteran or active-duty service member, click here to sign this public appeal to the National Guard!

This appeal is signed by:

More veterans and service members are signing this public appeal. Click here to add your name.