Veterans join over 10,000 in LA march for immigrant rights 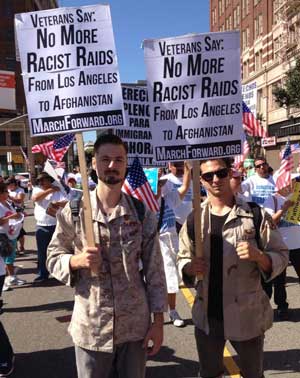 Members of March Forward! joined the ANSWER Coalition in organizing a demonstration attended by nearly 10,000 people in Los Angeles on Sept 22. The march was put on by a broad coalition of immigrant rights, community, and Central American organizations called “Millions of Voices for Immigration Reform.”

The purpose of the march was to exert public pressure so the immigration reform bill in Congress passes. Recognizing that the bill will help millions without legal status, but is still a long way from real justice for immigrants, the March Forward! and ANSWER contingent marched demanding full rights for all undocumented workers.  As the majority of enlisted service members are recruited from working-class and immigrant communities, members of March Forward! took to the streets to demand full rights for all active military, veterans, as well as our families and our communities.

Not only are service members, their families, and their communities impacted by the lack of legal rights, but many service members are told by joining the military they would be guaranteed citizenship, only to return home from war to be deported.  Many veterans have enlisted because of the promise of citizenship only to watch their families and communities subjected to brutal ICE raids and deportations.  Countless Marines, sailors, soldiers and airmen alike have been sent to fight and die in wars for empire only to sit by and watch as their families are deported when they return home.

Additionally, it is an undeniable fact that millions of those who immigrate to the United States are refugees of brutal proxy wars waged by the United States in Central America, in particular El Salvador and Nicaragua, whose communities were largely represented at the march. Neoliberal economic warfare on Central America also forces families to flee. Veterans play a dynamic role in opposing these policies.

The bill also includes huge multi-million dollar hand-outs to the Military-Industrial Complex to further militarize the border, and has measures to push young immigrants into the U.S. military. That is why March Forward! also raised the demand of stopping war and militarism at the march.

Veterans marched with placards reading “Stop all racist raids, from Los Angeles to Afghanistan” to connect the issues of the war on immigrants with the wars abroad. U.S. politicians use racism to justify ICE raids and the ongoing occupation of Afghanistan—and those same politicians want us to believe that it is the Afghan people and immigrant workers in the United States who are our enemies, when it is the politicians themselves responsible for growing hardship in our lives.

Imperialist wars and racism go hand in hand.  Racism is a tool that not only divides us as working people; it is used by the military to convince working people from the United States to fly halfway around the world to occupy, kill and die fighting working people in other countries.  While a war on our communities is being waged at home by brutal racist police violence, ICE raids and deportations, service members are recruited and shipped around the planet to kill, fight and die in wars that only benefit Wall Street.

“I’m here today because I have seen firsthand the devastation created when families and communities are torn apart by racism.  I was told when I deployed to the war in Iraq that I would be helping people, saving lives and protecting families, but instead I found myself fighting people for their resources, ripping families apart, and destroying people’s lives and communities.  And when I got home, I saw the same war, with the same racist lies, being waged against immigrant communities all across the country.  I’m marching today in solidarity with my immigrant sisters and brothers, their families and their communities because it will take a unified peoples’ fight-back movement to stop these racist immigration policies.  We must all stand up and defend equal rights for all working people.”

An injury to one is an injury to all! Stop the raids, from Afghanistan to Los Angeles!