Veterans tell Fort Lewis soldiers: "You don't have to go to Afghanistan!"

March Forward! is an organization of anti-war veterans and active-duty service members affiliated with the ANSWER Coalition. We urge you to support their important Our Lives, Our Rights campaign. 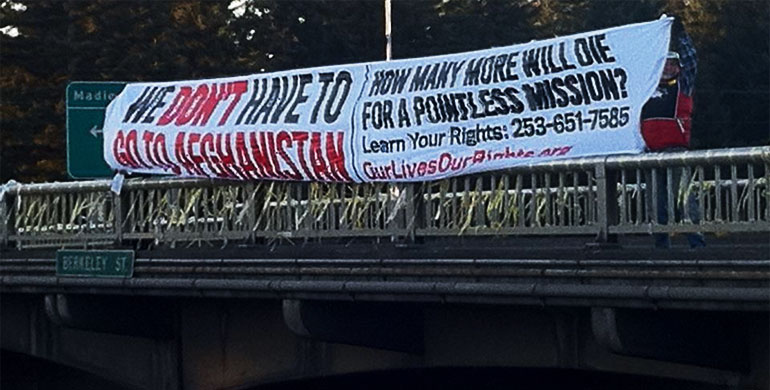 Please make an urgently needed donation now to support the work of anti-war veterans organizing in Fort Lewis against the deployment of troops to Afghanistan.

On the 11th anniversary of the Afghanistan war, members of March Forward! and Veterans For Peace joined forces to bring the Our Lives, Our Rights campaign to Fort Lewis, where a brigade is set to deploy to Afghanistan in a matter of weeks, with the message "You don't have to go to Afghanistan!"

Soldiers entering and exiting Fort Lewis are greeted by a giant 40-foot banner reading "We don't have to go to Afghanistan" and details on how they can get help in doing so. Thousands of leaflets with information and an indictment of the war are also being distributed by the Our Lives, Our Rights team of veterans.

Please make an urgently needed donation to support this effort to build the anti-war movement among active-duty service members.

Please give generously toward the Our Lives, Our Rights campaign. Your donation will help cover the costs of this trip and ensure that March Forward! continues to carry out and expand its anti-war work among active-duty service members and military veterans.