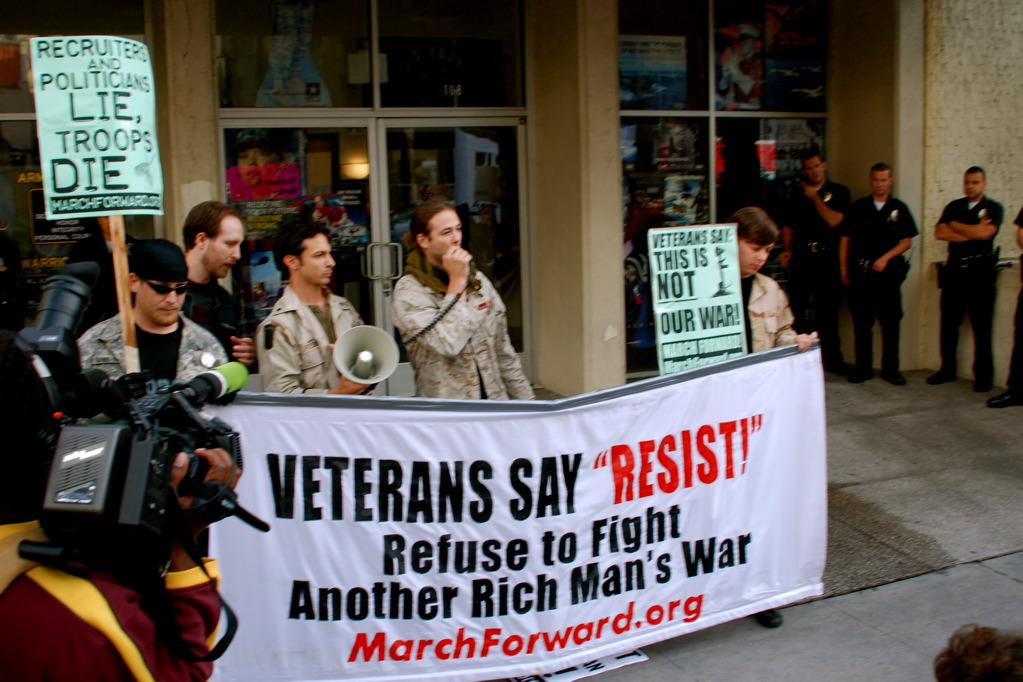 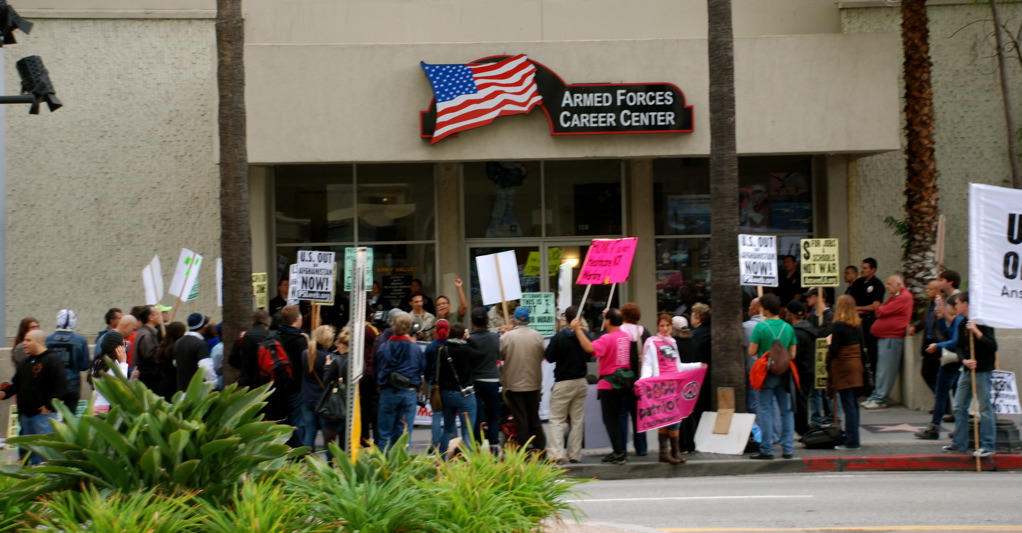 On Oct. 6, March Forward! veterans led a dramatic shut-down of a military recruiting station to mark the ninth anniversary of the war on Afghanistan.

The recruiting station is located in Hollywood, Calif. on the busy “Walk of Fame,” and is home to Army, Navy, Air Force, and Marine Corps recruiting offices. Over 100 people joined the veterans at the entrance, including students and military families chanting “Money for jobs and education—not for war and occupation,” and “Hell no, we won’t go, we won’t die for Texaco!” The protest forced the recruiting station to shut its doors for the day.

“We know that the majority of people who walk through these doors do so because they need a job, a college education, a home and health care,” said Mike Prysner, Iraq war veteran and March Forward! co-founder. “But veterans know first hand that the people of Afghanistan and Iraq are not our enemies. Our enemies are those responsible for the rising unemployment rate and the rising tuition costs; those responsible for slashing social services; and those who evict us from our homes—that’s who we should be fighting.”

The demonstration consisted mostly of young students, who have faced massive tuition hikes over the past year.

Tamara Khoury, a member of the ANSWER Coalition at California State University, Fullerton said, “We’re uniting with veterans and anti-war activists today to shut down this recruiting center because we keep being told that our classes are cut and tuition hiked because there’s not enough money. But over $700 million a day is being used to criminally occupy the peoples of Afghanistan and Iraq. Then, recruiters come into our schools and take advantage of how hard it is to get an education in order to convince young people to go die for the profits of banks and oil giants.”

March Forward! supporter Ron Kovic, Vietnam veteran and author of “Born on the 4th of July,” sent a solidarity statement to the event. "With this courageous act of defiance, veterans are sending a message to countless others across the country that the time has come to bring all the troops home from these senseless and unnecessary wars."

Iraq war veteran and March Forward! member Ryan Endicott said “We know just how much this government cares about us by looking at how GIs are killing themselves in record numbers after being denied adequate treatment; by how many of us end up homeless and unemployed; by the fact that one in three women in the military are sexually assaulted, but are denied PTSD benefits for their trauma.”

After shutting down the recruiting station, Prysner said, “To our brothers and sisters in the military: it’s time we stopped fighting for the profits of a tiny group of billionaires; instead, we should struggle together for what’s in our interests. But we’re not going to fight alone—we’re going to fight with students who are getting their tuition raised, with teachers who are getting pink slips, with families who are suffering layoffs and scraping to get by—because when we unite together, that’s when we win.”

The anti-war protest was initiated and organized by March Forward! and the ANSWER Coalition in Los Angeles. Dozens of community organizations supported and endorsed the action. March Forward! veterans also participated in and helped organize anti-war demonstrations in San Francisco and New York City.