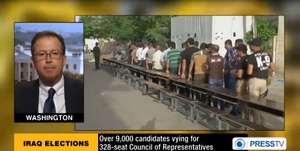 Below is a transcript of ANSWER Coalition National Coordinator Brian Becker's recent appearance on Press TV to discuss the current violence and instability in Iraq. Click here to watch the video.

Press TV: Do you think Nuri al-Maliki should be put to blame for, as our guest Mr. Mouracadeh (Jihad Mouracadeh, political commentator, Beirut) is saying, fueling the unrest and the violence in the country?

Becker: I think the al-Maliki government has a great deal of responsibility for what has happened.

I think that their policies have fanned the flames of violence.

But on the other hand and as an American I want to say, here we are 11 years after the ‘shock and awe’ invasion of the country, I think the United States government, both political parties but particularly the neo-conservatives, had an agenda, which was basically to shred Iraq as a nation –

In other words to so weaken it that it could never rise again as a regional power; that it would be utterly weak and divided or dependent on foreign powers for its existence.

And even though the US government has left in terms of its military presence in Iraq, the fact is the government in Iraq is completely weak – the central government. And they have no ability to control the Kurdish regions, which are developing an independent foreign policy with Western oil companies.

The Sunnis in the West have felt discriminated against, but those who are organizing the Islamic extremists so to speak, are also pursuing a reactionary narrow policy that can only harm Iraq in the long run.

We see the shredding of a country. It is the killing of a country by a foreign occupation and ultimately I’d say the US government is responsible for the murder and mayhem in Iraq.

It’s just awful that George Bush and Dick Cheney can go around making 150,000 dollar speaking engagements and selling their books after the crime they committed against the Iraqi people.

Press TV: Do you think that Saudi Arabia and Qatar – al-Maliki pointing to them - are responsible for what is happening because Mr. al-Maliki was saying that Saudi Arabia is playing the same role that it is actually playing in Syria, now in Iraq - Do you agree?

Becker: Well, I don’t know with 100 percent certainty about that. We do know that the Saudis have played a reactionary role and fueled the civil war in Syria.

They worked hand in hand in Syria with the United States and of course with Qatar and Turkey with those who had decided that the al-Assad government must be overthrown as part of the endless series of regime changes that are being organized by Western powers and some with their proxy and partners in the region, designed to overthrow any independent government regardless of its political or religious coloration; any independent government that has the ability to withstand the dictates of Washington.

In the case of Saudi Arabia I think the Saudis are pursuing again a reactionary policy – they very likely are supporting at least some elements in the insurgents n Anbar and in other areas in the Sunni region.

The real problem with Iraq is that the country has been disassembled by the US invasion.

And it was the US, as the other guest said, who picked al-Maliki as the favorite choice; they pursued and allowed him to pursue a policy of utter sectarianism and of course we know General Petraeus and the US military strategists relied on a policy of division, pitting Sunni and Shia against each other and of course, the Kurds.

And then they leave and of course the aftermath is that the Iraqi people are left with these very bad options and very bad alternatives. But I think ultimately it’s the US government and the central government in Iraq that’s responsible for this.

The people in Fallugia may not want to live under Islamic extremists, but they feel and have felt very abused by the Iraqi army.

So do you think it’s more of a problem with the system rather than the problem of Maliki as a person or as the prime minister? For instance, the Kurd issue being one of the problems - we see decisions being made by leaders in Kurdistan that the prime minister says are running against the country’s constitution?

Becker: I think we have to understand in the broader historical and the little-bit-longer historical perspective.

The Kurdish autonomy, so-called, that was accepted by Saddam Hussein was really an American plan – It was an American project. It was under the control of the American no fly zone; it also included the British and the French for a while.

During the entire 1990s and the first Gulf War where Iraqi aircraft could not fly over their own air space supposedly under the pretext of protecting Kurds; but I think it was creating a section of Iraq that would be loyal to and benefitting from a unique relationship with Western powers, in particular the United States.

It was under those conditions that this acceptance of Kurdish autonomy took place. I’m not against Kurdish autonomy, but I think it’s just important to establish the record that it was an American project to create a semi-independent Kurdistan with which the United States and the US oil companies devote their own independent contractual relationships, which can only hurt the other parts of the Iraqi nation, which also need the benefits of oil revenues.

(In response to statements made by the other Press TV guest that it was a UN Security Council resolution that established a no fly zone, it was not an American decision.)

That’s true, but I want to say this, it is important to establish this... This was after the fall or as the Soviet Union was collapsing, the Gorbachev government and the Yeltzin government, which took over in Russia was following a policy of appeasement with the West.

And so the UN Security Council became nothing but a fig leaf for American power. The Chinese were also not wanting to come against the US after Tiananmen Square they were trying to repair relations, too.

It was a Security Council decision... but... And you look at the airplanes... after a while France pulled out and then the British pulled out of the no fly zone, it was the US air force enforcing the no fly zone that made Kurdistan autonomous. That’s the reality of it.