Voices from Jeju Island: Anti-Naval Base Struggle in South Korea 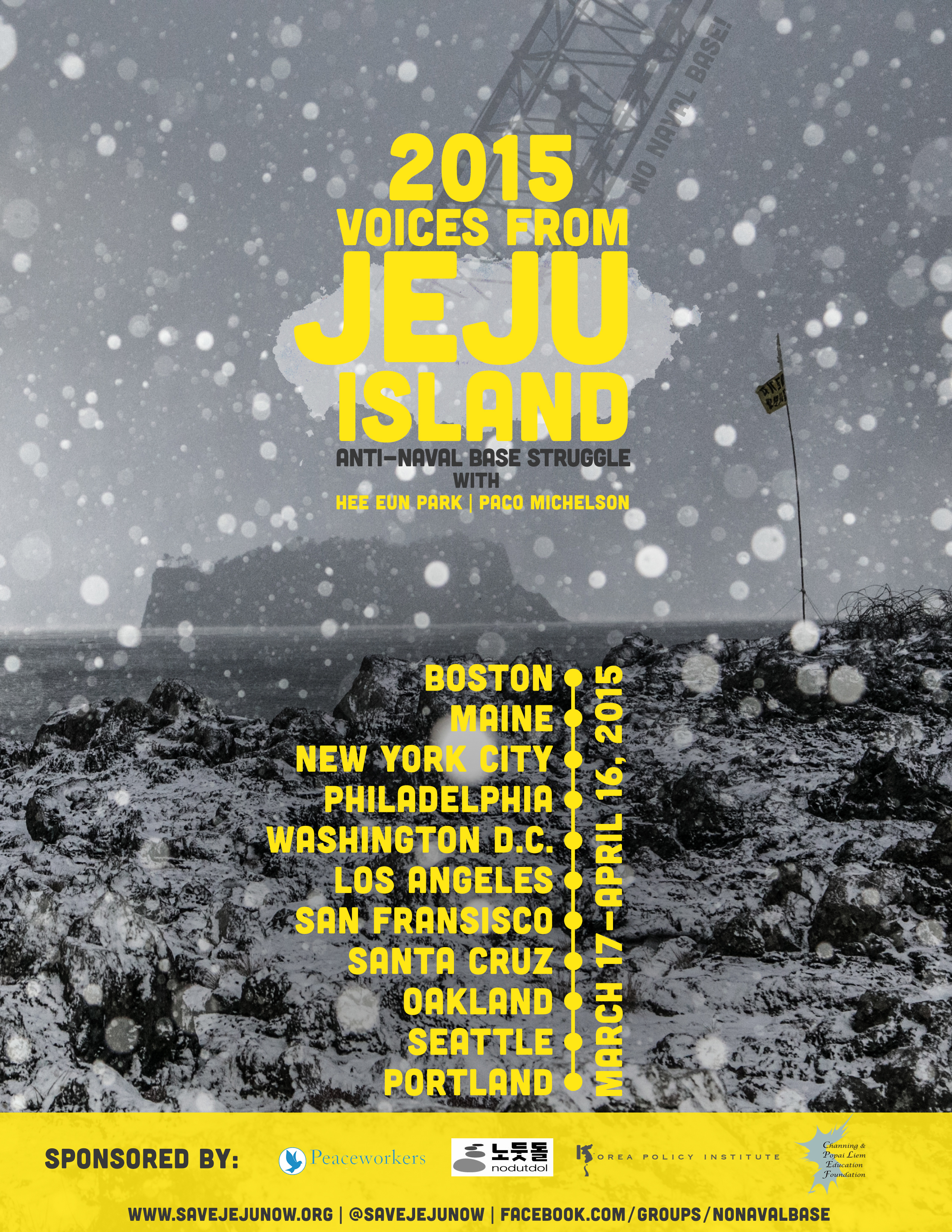 Since 2007, the people of Gangjeong and their supporters have struggled every day to oppose the construction of a Korean naval base on Jeju Island, the only special autonomous province of South Korea.

The naval base will be home to U.S. and South Korean Aegis Combat Systems, which are produced by Lockheed Martin to track and guide weapons. South Korean Navy officials say the base will be able to accommodate 20 warships and two 150,000-ton cruise liners.

The clash is a clear example of U.S. neocolonialism. The Korean people of Jeju are being violently forced to endure the theft of their land and a cultural landmark to serve the interests of the governments of South Korea and the United States.

Hee Eun “Silver” Park: During her 30 years, Hee Eun “Silver” Park has been a peace builder in conflict areas across Asia with a small Korea-founded community network, The Frontiers. Most recently she has rejoiced, struggled, and cried for justice in Gangjeong Village, Jeju Island, Korea.

Paco Michelson: With a small Korea-founded community network, The Frontiers, Paco Michelson has worked and lived in a number of conflict areas across Asia, most recently on Jeju Island, Korea, where a war base is being built against the wishes of the people of Gangjeong Village. He hopes that islands facing militarism and oppression can build strong resistance together.

All events listed below are open to the public. There are occasionally non-public events as well, check with your local groups in your area for details on those.

April 5 – Talk and Discussion: If You Don’t Give Up You Can’t Lose

April 7 – Film Screening and Q&A: Gureombi, The Wind is Blowing

April 8 – Talk and Discussion: If You Don’t Give Up You Can’t Lose

April 9 – Film Screening and Q&A: Gureombi, The Wind is Blowing

For more information about the tour:

Since 2007, the people of Gangjeong and their supporters have struggled everyday against state violence, corporate power, war profiteering, and environmental destruction. They have done so nonviolently and passionately. As a result of their work for peace, the tiny village of Gangjeong now has one of the highest “crime” rates in all of South Korea. More than 220,000 police officers (as of 2012) have been stationed in Gangjeong. So far, more than 700 arrests have been made, leading to approximately 200 court cases for more than 650 people, approximately $270,000 in fines levied, and 46 imprisonments. More than 30 internationals have been refused entry, deported, or denied entry. All for the “crime” of peacefully resisting the construction of a naval base that threatens villager’s livelihoods, the local ecology, and the peace of northeast Asia.

Many of Gangjeong villagers are farmers whose struggle for justice has meant sacrificing their crops. Many Gangjeong supporters work fulltime for the struggle and rely on odd jobs and occasional field labor to survive. The fines are increasing and many people owe thousands of dollars they cannot afford to pay.

Please think of these brave peacemakers who are giving everything they can in this fight for justice and make a donation to help cover their legal costs.

To donate visit: http://savejejunow.org/donate/ and click the “Donate Now” link. Be sure to make a note that it is for “Jeju legal” with your donation.