The war against Libya in historical perspective 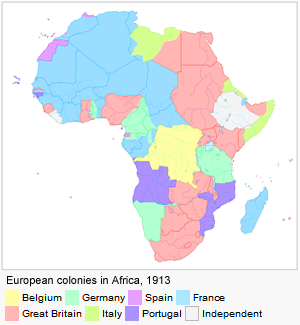 The leaders of 14 capitalist powers in Europe plus the United States met for a conference in Berlin 126 years ago to decide how all of Africa’s land and vast resources would be divided as colonies and zones of control among themselves. No Africans were invited to the conference.

The 1884 Conference of Berlin, more than any other single event, became emblematic of the dynamic transformation of capitalism into a system of global imperialism.

By 1902, 90 percent of Africa’s territory was under European control. African self-governance was wiped off the map in most of the continent. Only Ethiopia remained an independent state. Liberia was technically independent too, but it was in fact under the control of the United States.

The so-called “Scramble for Africa” by Britain, France, Belgium, Italy, Germany, the United States and the other capitalist powers was essential for the growth and enrichment of the modern-day capitalist class, which included the owners of the biggest banks, syndicates and monopolies.

Africa was plundered and looted and, as a result, the western capitalists entered the 20th century with the largest fortunes in the history of the human race.

The ‘Scramble for Africa’ continues

One cannot help but think about the Berlin Conference of 1884 when analyzing the London Conference of 2011 that took place on March 29. It was convened by the same imperialist governments that took part in the 1884 meeting. Africans were invited this time, but the African Union refused to attend. Almost all African nations were absent. Only Tunisia and Morocco sent representatives.

Although China, Russia, India and Pakistan decided not to attend the London Conference on Libya, the Washington Post’s front page headline reads, “World leaders indicate military campaign will continue until his [Gadaffi] ouster.” The Post suggests that “leaders” of the world met together and decided to keep bombing the country until they crush the current government and replace it with one that they find acceptable to imperialism.

It is hard to beat that for imperial arrogance. The great thinkers at the Washington Post declare who the “world leaders” are, even though most of Africa, China, Russia and India are absent and, in fact, oppose the brutal bombing of Libya that is designed to eliminate its sovereignty.

So as to avoid the impression that we are making an exact analogy between the Berlin Conference of 1884 and the one that took place on March 29, it is worth recognizing that some things have changed since 1884.

The imperialists who met in Berlin, for instance, did not have to waste any time pretending to care about the human rights of Africans or democracy in Africa. The bankers and corporate tycoons in the 19th century could speak bluntly about their “vital interests” as nothing other than naked colonial ambitions to loot Africa’s territories, resources and labor. They did not have too much concern about “public opinion” back in 1884.

That is a definite difference. Public proclamations by imperialist governments today have to pledge that they have no imperial or material incentive when they invade, bomb and occupy countries, and that their motives are pure – saving lives and promoting freedom. In the case of Libya, they are moved by the need “to protect civilian lives.”

Another primary difference is the emergence of neocolonialism as a replacement for the old colonialism. The anti-colonial uprisings in the 1940s, 1950s and 1960s of the peoples of Africa, Asia and the Middle East coincided with the weakeningof Britain, France and the rest of European capitalist powers as a consequence of the destruction wrought from World War II. While the imperialist powers tried to suppress the anti-colonial movements, those resisting colonialism received material support from the USSR, China, North Korea, East Germany, Czechoslovakia and later Cuba. Formal independence was achieved by the former colonies.

Libya had been a colony of Italy and was occupied by British and French forces in 1942. The United Nations declared Libya to be an independent country in 1951 under the leadership of a hereditary monarch. The monarchy was overthrown by a military coup, led by Gadaffi, in 1969.

Libya has Africa’s largest oil reserves. It is also part of the oil-rich Middle East, which U.S. imperialism considers to be a pivotal region that requires the exercise of colonial-type control. That is what Secretary of Defense Robert Gates means when he repeats every few hours on television that Libya is being bombed because the region represents a “vital interest” of the United States.

The London Conference is under the domination of the imperialists and former colonial powers. They want to install a puppet government in Tripoli or, as an alternative, partition the country and create client or puppet government that would rule over Benghazi and the oil-rich eastern territory of Libya. The new military leader of Libya’s rebel forces just arrived in Benghazi after having spent the past two decades in suburban Virginia, according to a March 26 McClatchy Newspapers report.

The United States, Britain and France have spent over $600 million dropping bombs and missiles on Libya in just the past week. But they do not expect, if victorious, to necessarily become the colonial power on the ground. The exercise of their control would likely take a different form.

Classic colonialism featured the acquisition by the colonial entity of the formal state power, and with it the formal and legal administrative and military obligations that belong to government. The indigenous population provides personnel, administrators, bureaucrats and soldiers under the command of the hierarchal authority of the colonizers.

Classic colonialism also featured the complete control and direction of the indigenous economy by the colonizing entity for the purpose of acquiring natural resources, cheap labor and access to markets for the industrial and commercial capitalist interests of the colonizer. This characteristic is equally present in both classic colonialism and neocolonialism.

Kwame Nkrumah, the first president and prime minister of Ghana, and a leader of the Pan-African movement, described the features of what he called neocolonialism: “The essence of neocolonialism is that the State which is subject to it is, in theory, independent and has all the outward trappings of international sovereignty. In reality its economic system and thus its political policy is directed from outside.”

Nkrumah prophetically described the many variants of the new colonialism, but placed the primacy of economic penetration as the “normal” and central method whereby the old colonial powers retain control over the former colonies.

“The methods and form of this direction can take various shapes. For example, in an extreme case the troops of the imperial power may garrison the territory of the neo-colonial State and control the government of it. More often, however, neo-colonialist control is exercised through economic or monetary means.”

Kwame Nkrumah was overthrown in a CIA-backed military coup in 1965 while he was on a state visit to China and North Vietnam. Nkrumah was a Marxist and a Pan-Africanist. A founder of the Organization of African Unity (OAU), Nkrumah was the recipient in 1963 of the Lenin Peace Prize, the Soviet Union’s version of the Nobel Peace Prize. When he was ousted by a CIA-backed military coup, all of the imperialist governments of the west were jubilant. So much for their embrace of democracy.

The bombing war against Libya today should be condemned without hesitation by all progressive people. This is a rich man’s war. The global imperialist order that took shape in the 1880s and continues today is the greatest violator of human rights everywhere and the U.S. government is, in the salient words of Dr. Martin Luther King Jr., “the greatest purveyor of violence in the world today.”