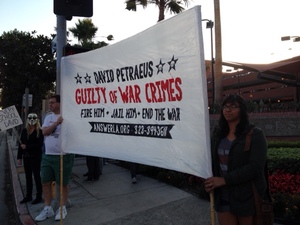 On Oct. 8 protesters gathered at a busy street corner to denounce the recent hiring of war criminal Gen. David Petraeus as the University of Southern Califonia’s new veteran affairs advisor. Petraeus was speaking at a conference for student veterans when protesters held up signs that read “Jail Petraeus!” and “Petraeus lied, women and children died!”

Petraeus is known in military circles as a counter-insurgency expert and is praised by war mongers for utilizing the “double-tap” method where drones conduct second strikes on rescue workers and victims’ funerals. Petraeus has committed a number of other war crimes —from ordering and facilitating illegal torture, to intentionally creating civil war in Afghan villages, to covering-up the murder of Iraqis by U.S. defense contractors. Hundreds of USC students, faculty and passers-by took flyers in support of the protest and agreed that it was egregious for Petraeus to be on the university’s payroll.

Shortly before the demonstration at USC, six City University of New York students were assaulted and arrested for protesting Petraeus’ appointment to the school’s faculty. Appointing Petraues to any position in any institution of higher learning adds to the problem of on-campus recruitment and militarization in schools. Students, veterans and anti-war activists are determined to continue to put pressure on Petraeus and these school administrations. Fire Petraues! Free the CUNY 6!