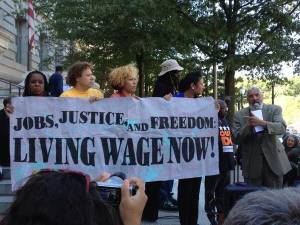 Sept. 17 saw protesters gather in front of the offices of both Mayor Vincent Gray and the District of Columbia Council to protest the veto of the Large Retailer Accountability Act. The LRAA would require businesses with over $1 billion in revenue and 75,000 square feet of space to pay a living wage of at least $12.50 an hour including benefits. Wal-Mart, which is currently building a number of stores in the District, took special offense to the LRAA, becoming enraged that they be required to pay anything other than poverty wages.

Wal-Mart launched a massive lobbying effort that failed to stop the LRAA, which passed the council with a significant majority. This was not terribly surprising as the vast majority of D.C. residents support lifting wages above the poverty level. Polling on the subject showed that a full 71 percent of residents support the LRAA; 63 percent said they would be more likely to vote for a mayoral candidate who supported the bill. The bill itself was fully in step with similar legislation. In 2006, the D.C. council required government contractors of over $100,000 to pay $12.50 per hour. Many of these contractors are much smaller than the Fortune 500 companies like Wal-Mart that the LRAA would impact.

Wal-Mart’s opposition to the bill was rooted in its never-ending thirst for profits. Wal-Mart would rather pay workers next to nothing than take even the tiniest reduction in their profit margins.

The protest on Sept. 17 was a response to Wal-Mart’s successful lobbying of Mayor Gray to veto the bill. Wal-Mart’s strategy was to blackmail the city by canceling the construction of stores in the poorest sections of the city most in need of retail and grocery options. The mayor and the five council members who sustained his veto were too cowardly to stand up to Wal-Mart, preferring instead to encourage poverty wages.

The rally, attended by dozens of D.C. residents, including some Wal-Mart workers fighting for better wages, was a highly spirited affair with chants of “our city” and numerous calls for retribution at the ballot box for anti-LRAA politicians.

The mood of the rally was not grim, with all attending promising to continue the fight for a living wage and to hold to account those who voted against the LRAA. With more living wage bills pending on the council docket, more pressure in the streets could tip the balance in raising tens of thousands out of poverty. All progressive people should support the struggle against poverty wages in D.C. and around the country.